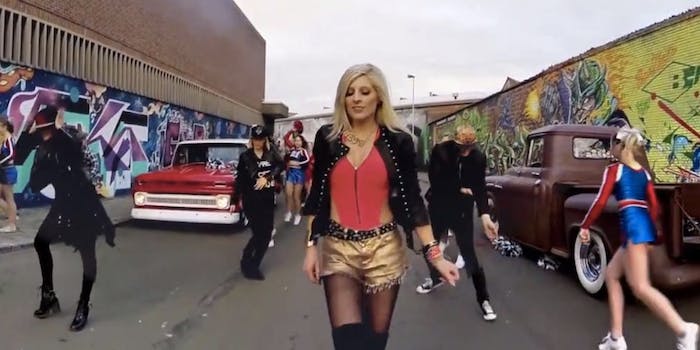 The era of 360-degree YouTube music videos has begun

Dutch musician Noa Neal shows off the technology with an upbeat tune.

YouTube is promoting the first music video on its site that uses 360-degree video shortly after announcing support for the format.

It took six GoPro cameras to shoot the clip for Dutch artist Noa Neal’s “Graffiti,” which the panoramic video company Kolor then uploaded to its YouTube channel. Kolor’s software is one of the most popular options for stitching together 360-degree video. If you’re using Chrome, you can watch the video in all its panoramic glory.

In other browsers, the video appears with the familiar fish-eye panorama effect, absent of all the drag-and-pull technology that 360-degree video touts as a key feature.

While it’s still prohibitively expensive for amateur filmmakers to set up a 360-degree film set, YouTube is hoping that these interactive experiences will grow cheaper and more popular as its big-name creators start adopting the technique. Imagine being able to look anywhere in Tyler Oakley or Zoella‘s space while they vlog.