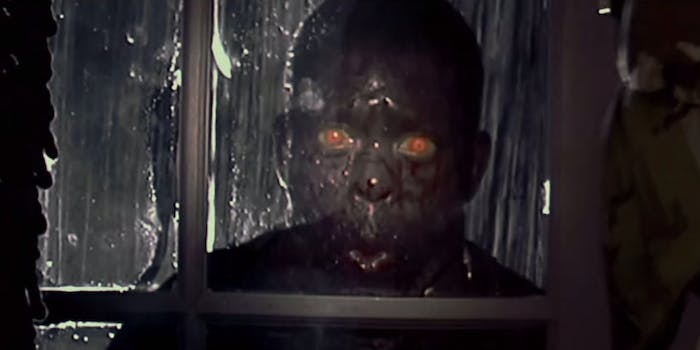 A third ’28 Days Later’ zombie film is in the works

Finally, a third film in the series will wrap up the cliffhanger ending.

28 Days Later fans who’ve been dying for resolution after the horrifying sequel 28 Weeks Later are finally getting their wish.

Alex Garland, who wrote 28 Days Later, said during an interview with Indiewire about his film Ex Machina that a sequel to 28 Weeks Later is in the works. The third movie in the series will be based on a concept by Garland, but his seed of an idea will be the extent of his involvement. Series producer Andrew MacDonald will take the reigns of the next film, which could be called 28 Months Later.

28 Days Later is about a virus that sends its victims into a homicidal, never-ending rage. It is so virulent that a single drop of infected blood can spread the virus and it tears across England, effectively destroying the country in 28 days. The sequel, 28 Weeks Later is about an American operation to repopulate London with the survivors of the outbreak, that results in the virus getting loose in Europe. The final shot in the film is of a crowd of infected running towards the Eiffel Tower while people broadcast a panicked cry for help.

Garland discussed the production of a third zombie film in the context of knee-jerk expectations that sequels are just part of how film works nowadays. “It’s also ingrained in the audience, like a paradigm,” Garland told Indiewire. “It’s just what you’re supposed to do. It must be what you want to do. How could you not want to do that?”

“Sequels are generally done in a rush. It’s done with a sense of urgency,” Garland told Indiewire. “The first movie, you spend a long time developing to get it over the line. The second thing, you don’t. Your expectations are different and your motivations are different.”

Clearly, this does not apply to 28 Months Later, or whatever the third film in the series will be titled. One could argue it’s been in nascent development for eight years. Proper development finally kicked off because Garland had an idea that kicked the production into motion.

“About two years ago, Danny started collaborating on the potential to make Trainspotting 2, another sequel,” Garland told Indiewire. “In that conversation, an idea for 28 Months arrived. I had a sort of weird idea that popped into my head. Partly because of a trip I’d taken. I had this thought, and I suggested it to Andrew and Danny, but I also said I don’t want to work on it. I don’t really want to play a role, and Andrew said, ‘Leave it to me.’ So he’s gone off and is working on it.”