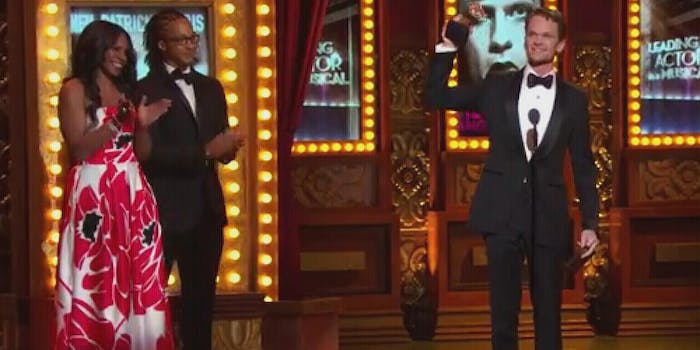 The 12 most GIF-worthy moments of last night’s Tonys

The 68th annual Tony Awards were held last night at New York’s Radio City Music Hall. You’ll find the list of winners everywhere this morning—spoiler alert: The Gentleman’s Guide to Love and Murder took home the big one—but in case you missed the show and wanted to catch the highlight reel, we’ve assembled a collection of hip-popping GIFs for your enjoyment.

The evening included star-studded performances of popular favorites new and old, including Cabaret, Les Miserables, After Midnight, and Rocky.

Neil Patrick Harris astonished the crowd with a glasses-licking, air-humping performance from Hedwig and the Angry Inch before taking home the Tony for Leading Actor in a Musical. “This is crazy pants!” he said.

Bryan Cranston won his first Tony for his Broadway debut turn as President Lyndon B. Johnson in All the Way, which also took home Best Play.

Audra McDonald made Tony history by winning a record-breaking sixth award for her performance in Billie Holliday in Emerson Bar and Grill.

But it was actor James Monroe Igelhart who really summed up the evening’s energy with his acceptance speech for his first Tony in Aladdin. “I know that this is supposed to be the most dignified awards show of the season, but I have to do this: This is a praise shout.”

Congratulations to all the winners and nominees.