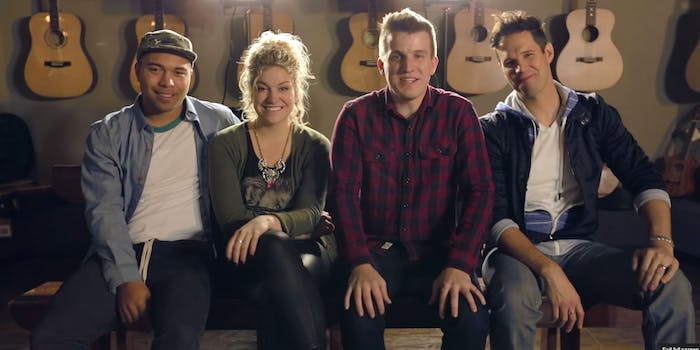 Here’s every popular song from 2014 in 3 minutes

This compilation is far more pleasant to the ears than most of the songs were.

2014 was quite the year for the music industry: Artists like Taylor Swift, Beyoncé, and Maroon 5 proved they still had what it takes to remain on the charts. Joining them in the spotlight were inescapable hits from Pharrell Williams and Iggy Azalea.

And, of course, you couldn’t turn on any radio or playlist without hearing something from Frozen, whose dedicated fanbase still hasn’t let it go since the movie’s theatrical release last December.

Granted, taking a musical tour of the hits of 2014 would be rather time-consuming, not to mention a little irritating (*cough* “Royals” *cough*). Fortunately, YouTube musicians James Curran, Ashley Hess, Eric Thayne, and David Osmond took the time to condense the hits of 2014 down to a far more manageable three minutes. They even included references to a few noteworthy non-musical moments, like the ALS Ice Bucket Challenge and the Ebola scare. The result is something that is actually somewhat beautiful.

Sadly, the group omitted selections from “Weird Al” Yankovic’s album Mandatory Fun, which snagged the No. 1 spot on the Billboard charts and marked a surprise resurgence for the parody artist.