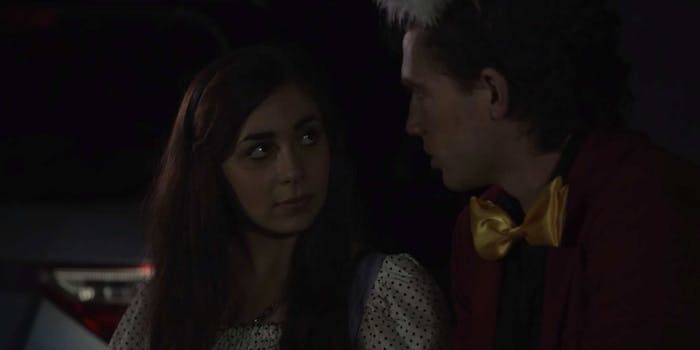 Horror has always been a mainstay for women who wanted to push boundaries as directors. Mary Harron, Karyn Kusama, and the Soska Sisters are just a few of the women who’ve done groundbreaking work filming our worst nightmares.

To the lineup, we can now add 14-year-old Emily DiPrimio. DiPrimio used Kickstarter to raise more than $30,000 to fund her first feature film, Carver, over a year ago. The movie combines an I Know What You Did Last Summer-esque revenge plot with lots of ’80s horror sendups.

It looks awesome. As the movie website describes it:

Carver is about a group of teenagers who are haunted by a despicable act they committed when they were younger. Their actions caused the deaths of three innocent people. Now on the anniversary of those deaths an ominous calling card, in the form of a carved pumpkin has been placed at each of their homes. Someone is out for revenge…the question is who?

Carver is a throwback to those wonderful slasher films of the 80’s. It is a story about revenge and redemption. There are plenty of scares and we promise, NO CGI BLOOD!

On DiPrimio’s blog, she marveled at the response the trailer has received. With more thank 40,000 views on YouTube since it landed a week ago, it looks like the young filmmaker may have a cult hit on her hands. “It has been a whirlwind,” she wrote, “one that I will never forget.”

She also took her critics to task, addressing skeptics’ claims that her dad, not her, actually directed the film and was just using her as a prop.

This is extremely insulting.  Not only to me but my father as well. Yes, we wrote the screenplay together.  Yes, he was my AD on the film.  But I was the director.  This is my vision, my hard work, my dream.  I am lucky enough to have a father who supports me and worked his butt off for me to make sure the movie was completed on time.  Actually, we finished one day ahead of schedule but that is besides the point.

DiPrimio isn’t the first precocious Emily to make a name in horror for herself at a young age. Emily Hagins, who directed her cult horror hit Pathogen in 2004 at the tender age of 12, is preparing to release her fourth feature film at the equally impressive age of 21.

It looks like these teen horror fangirls are preparing to inherit the blood-soaked earth of their predecessors. We can’t wait.