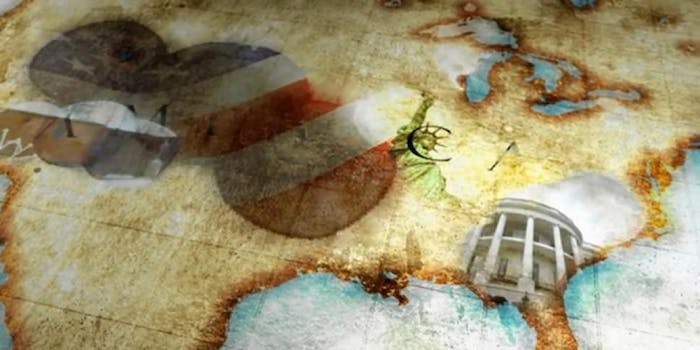 Even a look through the documentary's Facebook page will send a chill down your spine.

To purchase a ticket to a film simply titled America, particularly when the tagline asks audiences “Imagine a world without her” is to know exactly what you might be about to receive. And yet, the reality of upstart filmmaker Dinesh D’Souza’s second grassroots documentary hit is that it’s actually so much wilder—and more disquieting—than many could possibly imagine. That is, unless you’re part of D’Souza’s target audience: conservatives looking to have their fears about the changing world assuaged, their outrages affirmed and given new and vibrant life.

Saying that America is preaching to the choir doesn’t quite cover it. In its first week of nationwide release, the film garnered an A+ Cinemascore, the kind of four-quadrant audience approval that most big Hollywood productions lust after in the early hours of the morning. This signifies that among those who went to see the film in its early days of release, people not only left satisfied, but overwhelmingly so. (For perspective, crowd-pleasing hits like Up and The King’s Speech were among those to rate as well.) America is the anti-Michael Moore doc, a film designed to pack in partisan audiences the same way Moore often has, from the other side of the American political battle lines.

(A disclaimer before this editorial continues: the following will be an assessment of America as a terrible and socially reckless film. Please feel free to scroll down with invective comments here if you already disagree, as the following paragraphs will likely fail to edify.)

Audiences aren’t just enjoying America. It’s filled them with vim and vigor, a renewed desire to shroud cheekbones in red, white, and blue warpaint the nation over and take up hopefully only figurative arms against the liberal agenda. This isn’t just derogatory generalization, either; D’Souza builds much of his film around the leftist “culture of shame” over the more sordid facets of American history—and sets out to debunk myths like the continued displacement of Native Americans or the systemic oppression of ethnic minorities. America, in large part, exists to assure audiences that nice, upstanding conservatives are not in fact the villains they’ve been portrayed as by a biased media in recent years.

D’Souza is out to throw his arms around those who steadfastly refuse to change their politics, no matter what the national climate, and they’ve responded in kind. A cursory glance at the film’s Facebook page turns up rave reviews like the following: “I only just heard about this movie recently I haven’t seen any advertisements for this movie and now I understand why my mother had told me what this movie is about it’s about America and its anti Obama I am glad someone’s making a movie about the truth.” Others refer to screenings in the “People’s Republic” of Boulder, CO. Often, the discussion seems to center around getting others out to see it as well: “#AmericaTheMovie Saw it Monday night. The crowd clapped. No movie is perfect and fault finders will find fault. The movie’s message, however, is solid and excellent.” 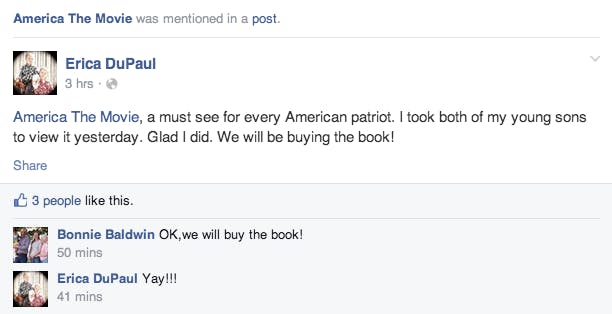 This last example speaks to D’Souza’s approach: bring in the people most receptive to the film’s ideas and let them do the legwork. Indeed, America concludes with an invocation to head to the film’s website, which helpfully offers promotional materials for those who might care to mobilize and spread the word about the film. Like an evangelical minister, D’Souza wants to bring as many people in to hear the good word as possible. But rather than the word of the Lord being up for discussion, D’Souza wants to get people talking about the progressive menace. This is nothing new, really; two years ago, D’Souza’s previous film 2016: Obama’s America helpfully outlined the intimately apocalyptic scenario awaiting the nation should he receive a second term and was a word-of-mouth hit based on a similar business model to the one D’Souza is employing here.

But America appears to be built with a more nefarious intention in mind. More than a tool to educate the American people, America is out to get D’Souza over, above and beyond any other purpose. And he does it under the auspices of revealing buried truths. The film distributes its time between historical revisionism via History Channel-style re-enactments of social events, direct addresses of Obama’s regime in an effort to dispel liberal myths, and a lot of shots of D’Souza staring dramatically at American landmarks while talking about how well he’s done for himself as an immigrant. There’s also a book around which this film is based, which is acknowledged as well, because cross-platform branding is the greatest weapon of all against the left, especially when even revelatory literature has come under the oppressive fist of modern society.

D’Souza breaks the whole of modern political debate into five handy bullet points and makes sure to dramatically name alleged victims as he goes so that he can shoot down these falsehoods later on. In D’Souza’s America, everyone from Howard Zinn to Matt Damon is responsible for the creation of a national guilt complex. Indeed, the Bourne films are actively implicated in the spread of a liberal ethos at one point early on. D’Souza has all kinds of targets for audience members to go home enraged over, from Zinn to a Native American reservationist who feels wronged by the government to Saul Alinsky, who in the film’s purview may in fact have been Lucifer.

America doesn’t offer much room for debate. Wisely, D’Souza never really purports that his audience can go forth and offer dialogue with the tools he’s so prophetically bestowed upon them. Instead, he tells people that nothing they believe is wrong and gives a series of straw-man arguments they can use to refute any and all dissenting opinions. The film is built to assure audiences that they’re not crazy, that the media is in fact out to get them, and even helpfully educates them on which public targets are fashionable this season. America functions like a theatrical book club, bringing like-minded people together to drink sodas and shake their heads in stoic reproach.

Among D’Souza’s arguments: that fast food is great because it’s far more expensive to fix yourself a healthier meal at home, that slavery has really been over-exposed given that there were black slaveowners and white slaves, that “capitalists are under fire” and therein that manifest destiny isn’t something to be ashamed of. The film is fixated upon Randian ideals, down to the interviews where border patrolmen talk about how nobody runs back into Mexico, or the history lesson in how America gave Mexico most of its land and, thus, immigrants should be more grateful. It elucidates the ways in which Sioux Native Americans committed their own genocides, and how African American success stories from the Civil War era confound the “shame narrative” of modern society.

If all this sounds bullet-pointed, that’s because America is helpfully structured as such. It exists within the rhythm of the 24-hour news cycle by breaking complex issues down into sketches, stating D’Souza’s opinions from his book as definitive fact, and hastily moving on to the next shocking expose before any dispute or rapport can emerge. As The Wrap’s James Rocchi notes in his review, “America isn’t a documentary; it’s more like the badly-filmed version of a badly-written, meandering op-ed piece from a paper that lacks fact-checking or proofreading. Or worse, it’s the film version of a dunderheaded hashtag-activism campaign, perhaps #NotAllCapitalists or #YesAllConservatives, all slogans and no thinking.” D’Souza is in the business of arousing inchoate rage, above all but profit.

And profit he shall. The tragedy of America, above all those outlined in brief and those that a viewing of the film would offer forth, is that Dinesh D’Souza is a charlatan of the highest order. Just a few months ago, D’Souza plead guilty to charges of campaign fraud, after it came to light that he’d used straw donors to fund Wendy Long’s Senate run in 2012. Indeed, he takes time away from proselytizing during America to address this. But lest you think the film gets into any kind of genuine disclosure, D’Souza paints his indiscretions as blown out of proportion by a political juggernaut out to silence a dissenter. Even as he prepares to serve somewhere around a year in prison, D’Souza continues to rake it in where he can.

But that’s the beauty or tragedy, depending on your perspective, of America. No matter what you could possibly say against D’Souza or his film, it ensures that if you disagree, you’re already irrelevant. It’s a remarkable logic device, one that allows D’Souza to direct the course of discussion wherever he likes. You’re either with him, or you’re one of the many anti-Americans outlined throughout the film. And audiences who don’t want to fall into that latter category will rally around the former with open arms, as D’Souza has managed to make himself a walking symbol of a supposedly dying America. He’s even looked forward; the film ends with re-enactments of a young Hillary Clinton’s dalliances with Alinsky.

Not only does America give audiences reasons to hate the current White House staff, but it prepares viewers to hate the hypothetical next one as well, just in case D’Souza’s term isn’t up by the time the 2016 election cycle gets going.