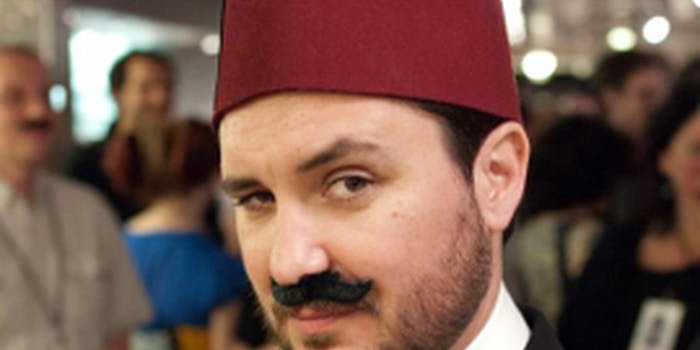 Wheaton's tale of connecting with a fan is the sweetest thing you'll read on Facebook this week.

In a week where it seems like geek culture has served as a setting for endless facepalming, it’s nice to have a reminder that geekdom is also constantly inspiring and enriching us. This week, the reminder comes courtesy of actor and geek hero Wil Wheaton, who found his own surprising source of inspiration at MegaCon last week.

On his Facebook, Wheaton—best known for his roles in Star Trek: The Next Generation and Stand By Me—wrote a moving post about a fan encounter that profoundly touched him. You’d pretty much have to be an inanimate object not to get at least a little choked up.

“I was a fan at conventions long before I was a special guest,” Wheaton wrote.

I know what it’s like to be on that side of the table, and it’s important to me to treat people the way I want to be treated. It’s also wonderful, because I get to meet remarkable and inspiring people, and share in the mutual joy we have for Doctor Who, Tabletop gaming, Game of Thrones, Star Wars, Star Trek, beer, hockey, and silly Internet memes.

Wheaton went on to describe the number of inspiring and touching fans he met that weekend:

I met dozens of people who told me that they were scientists, engineers, doctors, or programmers because they were inspired by [his Star Trek: TNG character] Wesley Crusher. I met tons of women and a few men who told me that I was their first teenage crush. I met a lot of people, men and women, my age and younger, who thanked me for speaking out about depression and anxiety. I held a young woman’s hands while she cried because her anxiety was so intense and scary, and I promised her that she would be okay. I was moved by her bravery, and inspired by her courage.

Still, he said, there was one that truly stood out from the crowd:

On Saturday, a young woman walked up to my table with her husband and her two children. She handed me a typed letter and told me that she knew she wouldn’t be able to get through what she wanted to say to me, and would I please read it.

I unfolded it, and read her story. When she was a young girl, she had a serious complication due to her Lupus, and her doctors told her that she would never walk again. She had a photo of me, though, that she took with her to physical therapy every day, and the therapists would hold it up for her and encourage her to walk toward it — toward me — while she recovered. She made a promise to herself, she said, that she would walk again some day, and if I was ever in her town, she would walk up to meet me. At the end of her letter, she thanked me for being there, so she could *walk* to meet me.

I looked up at her through tears, and she looked back at me through her own. I stood up, walked around my table, and put about fifteen feet between us. I held my arms open, and asked her to walk over to me. She began to cry, and slowly, confidently closed the distance between us. I embraced her, and we stood there for a minute, surrounded by thousands of people who had no idea what was going on, and cried together.

Needless to say, Facebook has reacted emotionally as well to this story. Nearly 14,000 people have “liked” Wheaton’s post since Tuesday, and over 5,000 people have commented on it.

But some, including self-described “geek convert” Veronica Hanson, are taking away as much respect for the humble, gracious Wheaton as they are for the woman who walked to him.