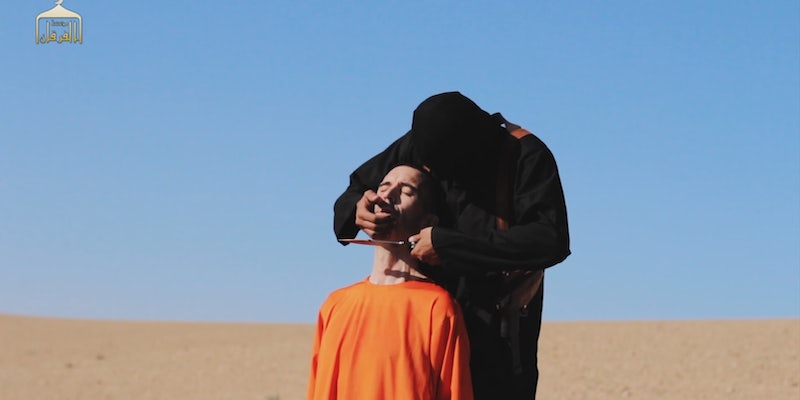 Why you watched ISIS kill someone—and why that’s OK

ISIS is cutting off prisoners' heads on YouTube. Why can't we look away?

The most iconic images of the fight against the ISIS have come from the group’s macabre execution videos. While most of their hostage killings have been brutal beheadings, the terrorist collective escalated their debauched violence by locking a captured Jordanian pilot in a metal cage, dousing him in fuel, and setting him on fire.

Despite the evident blacklisting of the footage by media outlets here in the U.S., there exists a very natural desire to see them across all demographics. The first Americans beheaded by ISIS last August were such a popular news story, in fact, an NBC News/Wall Street Journal report found that “a whopping 94 percent of Americans say they have heard about the news of the beheaded journalists—higher than any other news event the NBC/WSJ poll has measured over the past five years.” In response to the demand for the footage, sites like Twitter banned the videos. Even Liveleak, which rarely censors any media, took a stance against the videos as ISIS propaganda, stating that “there is a difference between showing what is happening and advertising.”

Why these violent images—or any disturbing content—remains so prevalent online is the matter of much debate. Should we, as some suggest, watch such gruesome footage of war to impart the factual dangers present to our comfy Westernized lives? Or, as the administrators of Liveleak have done, should we turn our shoulder to the tactics of heinous and savage war criminals?

Living vicariously through traumatic content has become a major theme of life on the Internet. In the earliest days of the Web, Rotten.com spoiled many a childhood with horrific scenes of blood and human ephemera. Liveleak, despite it’s heavy hand on ISIS beheadings, is host to hour after hour of violent footage, be it car crashes, murders, suicides, and industrial accidents. Reddit has numerous popular sections devoted to grisly images, from /r/gore and /r/WTF to the succinctly titled /r/MorbidReality.

A decade before ISIS marched through the Levant, the beheading of American contractor Nicholas Berg by Iraqi militants took the Internet by storm. As Frances Larson writes in his book Severed: A HIstory of Heads Lost And Heads Found, the Berg footage was astoundingly popular online despite a complete blackout of it on traditional news sources. “Berg was killed just as public support for the war in Iraq was beginning to decline,” Larson notes, “and the popularity of the video underlined the extent to which the Internet had eclipsed more traditional news media when it came to creating a story.”

Psychologists have theorized for a century humanity’s obsession with morbid images and experiences.  In his seminal 1920 work Beyond The Pleasure Principle, Sigmund Freud called it a “death drive,” opposing our instinct towards pleasure and life. Freud surmised we all have “an urge in organic life to return to an earlier state of things”—that is, the lack of consciousness that existed before our birth.

To illustrate this point, Freud tells the story of a baby in a crib who throws his favorite toy over the crib, only to cry upon missing it. However, the toy having a string tied to the crib allows the baby to reel it back in. As Freud watched this game of loss and return, he realized the baby was playing a game to simulate the loss it feels when its mother leaves the room. “He made it right with himself,” Freud writes, “by dramatizing the same disappearance and return with the objects he had at hand.”

By confronting violent imagery, we bring ourselves closer to death to experience it in a different state, much like Freud’s baby forces himself into grief. The Internet provides us with a vast archive of opportunities to safely explore the violent thoughts everyone has throughout the day. This mission for catharsis (which comes from the Greek katharsis for “purification”) leads us to want to experience violent and disturbing scenarios to prep the brain for any future trauma we might experience.

However, author Eric Wilson’s 2012 book Everybody Loves A Good Train Wreck: Why We Can’t Look Away forwards a far different theory. Viewing the suffering of another in any form, writes Wilson, could be the destination of our mission to find empathy. By viewing the death of hostages held by ISIS, for instance, we are seeking out the chance to feel a pain we cannot imagine for the optimistic purpose of relating with another human.

Once we welcome these unseemly resolves as integral portions of our being, the devils turn angels. To stare at macabre occurrences—this can lead to mere insensitivity, gawking for a cheap thrill; or it can result in stunned trauma, muteness before the horror. But in between these two extremes, morbid curiosity can sometimes inspire us to imagine ways to transform life’s necessary darkness into luminous vision.

While surely this could be the result of watching a caged man set on fire, it certainly isn’t the intention of a group like ISIS which merely hopes to anger and instigate nations that refuse to pay the demanded ransom. Which is the crux of the normative debate surrounding this issue—do we boycott the images in the belief that when we watch them, the terrorists win, or do we confront them to understand the suffering they’ve imparted upon thousands of innocent people?

If the reason we view these videos is to confront our own fear of loss and death, as Freud and evolutionary psychologists would have us believe, then the practice is inherently selfish. But perhaps we are confronting footage like that produced by ISIS not to test our own gumption but, as Wilson suggests, to discover if we can empathize with those going through our worst nightmare. If this is true, then what’s happening when we watch the deaths of hostages is almost beautiful, a triumph of our desperate need to connect with victims of humanity’s worst.

Either way, we must recognize that the human desire to bare witness to such evil is as strong as our urge to banish it from the Earth.