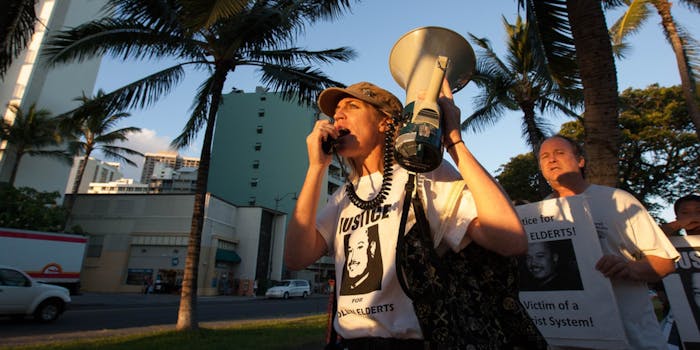 If you’re like most of the smart, kind, politically invested white people I know, you’ve probably been watching recent events via the Internet and the news and thinking, “I am very informed on these circumstances right now, but I don’t know what I can do.”

Wanting to do something concrete and tangible in the face of horrible injustice is natural, but sometimes acting on it can be complex. Last week, I saw my social media feeds positively overflowing with white people wondering if they should go to Ferguson to provide some kind of protective force between the police and the protesters, to bring supplies, or to simply be present and swell the numbers.

All of these urges are admirable and well-meaning, even if a massive influx of untrained white inpiduals into a community-based situation is probably not super helpful. Of course, people of color might want to go—to see a town rise up against injustice in this way, to protest the police, and to hold them accountable; I can’t imagine the pull that must have for those who’ve resisted institutional racism their whole lives.

But white people? I don’t know. We shouldn’t be making this about us. And I don’t think we need to be on the ground there to have an impact. Being a white person myself, I had a few ideas for constructive things that white people can be doing every day—not just when certain hashtags trend on Twitter.

This ought to be simple, but it rarely is.

We need to trust people of color when they talk about their experiences of racism. We need to defer to their expertise on the subject. We need to not argue with them. We need to not assert that we or anyone else is an exception to the stories they tell. And most obviously, we should never, ever try to teach people of color things about racism. If you find yourself in such a conversation, just pause and ask inwardly, “Do I, as a white person, genuinely have more information about living under racism than a person whom racism directly targets?” The answer is going to be no.

And when I say listen, I mean listen. Don’t interrupt to ask questions. Don’t redirect the conversation to meet your interests or needs. Open your brain and actively listen and take it all in. And if you have the resources to do so, focus on amplifying the voices of people of color who aren’t being heard, over making your own declarations.

2. Question the narratives you’re hearing—all of them.

I don’t think it’s unreasonable to assume that most white people want to trust established systems of authority, like the government or the police. Even well-meaning liberals acknowledging problems within these institutions will usually acknowledge a perceived inherent goodness, marred by a few bad apples.

This is markedly less true for people of color, especially groups who have suffered sustained racism at the hands of people in positions of authority their whole lives. So when police describe the events that led up to the death of Michael Brown—or Eric Garner, John Crawford, or Ezell Ford—white people tend to believe that the police are telling the unvarnished truth, because most white people have never had any reason to worry that the police might lie, or might try to embellish the facts against them.

It actually makes sense that embellishment would happen. In many cases, the main thing standing between law enforcement officers and bodily harm from the suspects they pursue is the powerful social and legal consequences to be suffered by anyone who intentionally tries to murder a police officer. To admit wrongdoing on the cops’ part could be an injury to the righteous authority of the police. To confess that a situation was mishandled could be seen as losing ground to those who would argue that law enforcement is corrupt and dangerous, not to mention increasingly militarized.

Of course, police, both individual and institutional, are capable of misrepresenting the facts. It’s irrelevant whether this is an intended perversion or simply a matter of remembering things differently. The police, holding more power than the person they’ve harmed, are always going to have their retelling privileged over that of other witnesses.

The good news is that we can question that narrative. We don’t have to accept the official report as gospel. We can seek out other perspectives. Just because something is printed on a special form doesn’t make it extra true. And #notallcops are bad, sure, but let’s not assume that being a police officer gives you any more clear and objective a memory of extremely traumatic events than a bystander. People in communities where police have frequently been accused of racism are pretty adept at recognizing it when it happens.

3. Cultivate an awareness of privilege and racism in the world around you.

If you’re white, odds are good you’ve got some of both. Being aware of it doesn’t mean “feel guilty all the time.” It doesn’t mean you’re a bad, terrible person who wants to hurt or even just avoid people who are not white. Having people of color as friends (or as spouses or significant others) does not serve as armor against accusations, either. You can be very close to numerous people of color and still be tainted by the privilege afforded you by institutionalized racism, because, if you’re white, you are literally soaking in it.

Privilege doesn’t mean somebody gives you a pony just because you’re white. It means that the world automatically defaults to treat you in non-racist ways. It means that if you get a pony, you’re less likely to be accused of stealing it, or not deserving it. For white folks steeped in privilege, we have the option to take this broad cultural treatment of us like inpidual human beings for granted.

But for people who have lived with racism influencing how they are perceived and treated their whole lives, this arrangement might look very, very different. When we refuse to acknowledge or understand our privilege as white people, while simultaneously dismissing the real lived experiences of people of color, it looks like we’re unapologetically supporting our own social supremacy. (Also, again? Casual racism is still racism.)

Here’s the hard part: Neither privilege nor racism can be shed with ease, like a shirt you suddenly notice is hideous and just take off and throw away. A better analogy would be cleaning out a massive fifth-floor warehouse by yourself, using only a milk crate to carry things, and no elevator. Even with focused effort, it’s going to take a long time, you’re probably going to have setbacks, and it’s going to be exhausting.

That’s OK. It’s not hopeless. Today’s privilege and racism are institutionalized social constructs that have been in place for hundreds and hundreds of years. You are not going to crawl out from under them in a day. It will require a sustained effort, but the good news is, by engaging in it, you’re throwing your weight behind a better world.

4. Educate your own damn self.

Read things and teach yourself about historical and social contexts—do not expect others to do so. Very often, even the best-meaning white people find themselves in a place where they’re throwing up their hands in despair, crying out, “BUT WHAT DO I DOOOO?” and asking (or demanding) that people of color explain racism to them. All of it. As though racism is an easily summarized subject without centuries of historical and institutionalized underpinnings. As though explaining it is a thing that is beholden upon people of color to do, on top of being subject to racist bullshit on a regular basis.

It’s basically saying, “Hey, I know you’re tired from living your life and stuff, but can you please play professor for me, because I’m a white person who cares?” It’s good that you care! But your caring should extend to the recognition that explaining racism is sometimes really painful and unpleasant for the person describing it to you.

You can find your own resources. Even googling “how to be a white ally,” obvious though it is, will deliver some good starting points, like this great piece from The Root. I am pointedly not linking to a million resources here, because the looking will also help you develop some sweet research skills so that in the future, if you say something accidentally offensive, you can figure out why sooner, without having to demand that whomever you’ve offended explain their offense to you.

(Have you ever had to explain why you’re upset to someone who just upset you? It’s a crap deal.)

Have difficult conversations. Do so even knowing that you are going to say the wrong thing sometimes. You will make mistakes. Accept this inevitability. I bet I’ve totally screwed something up in writing this piece you’re reading right now. Even white people who are respected as often-published brilliant academic authorities in anti-racism screw up on a regular basis, because — I’d argue — it’s impossible for a white person to ever be a complete expert on racism. You’re going to screw up, and then you’re going to have to be quiet and listen when people tell you that you’ve screwed up. (There’s nothing wrong with a little humility now and then.)

You’ll have to do this, even when it makes you feel bad, or when you are really very certain that you are totally not racist. But that feeling? Is you facing and confronting your privilege. That’s why it feels so unpleasant and you want it to stop right away. Imagine what it’s like to feel dismissed, silenced, and discredited by authoritative institutions your whole life. You can’t. But the trying gives you a little perspective on the whole thing.

And finally, when people around you are perpetuating racism, you can say something. I’m talking about other white people here. And I don’t mean you should only speak up when there’s a person of color present that you feel inclined to defend. You can say something in rooms full of white people, at work, or in family gatherings. You can vocalize that racist comments and jokes are hurtful, or rude, or presumptutious, or otherwise problematic, and you can prod other white people into rethinking and criticizing the assumptions that make them feel entitled to make them.

Some white people will refuse to do this. That doesn’t mean you’ve failed. You might not be able to change everyone’s mind, but you can at least create an atmosphere in which it is not acceptable for people to make those comments around you.

That’s something. At least in that, you’ve made the case that these sorts of things are not okay. Maybe the white person in question will do a little googling later. You never know.

Note: I really struggled with whether it was even appropriate for me to write this, as I cannot pretend to represent for anything other than my own experiences as a white person working on confronting my privilege for…about twelve years or so. Yes, it can take that long. It actually might not end. And I still make mistakes all the damn time. I’ll never call myself an expert. But as a person with so much practice in messing up, and also believing that it’s wrong to expect people of color to do all the heavy lifting of dismantling racism on their own, I thought I’d give it a shot here anyway.

Photo via MattUrsua/Flickr (CC BY 2.0)