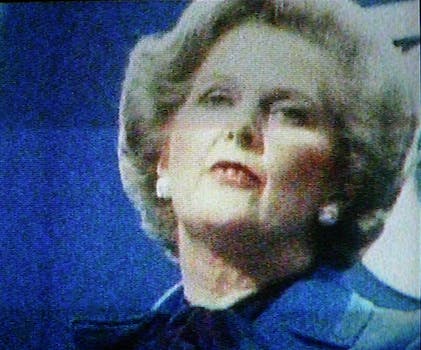 They're apparently not too sure how to use Google, either.

If you don’t know who Margaret Thatcher was, think of her as the British equivalent of Ronald Reagan. Both spent the 1980s leading a major English-speaking world power (she was prime minister of the United Kingdom, he the president of the United States), and both were considerably more conservative than their predecessors. That’s why, to this day, they’re both utterly loathed by the political left wings of their respective countries.

Also: if it’s only the year 2013, and you’re a British or American citizen old enough to need two digits when you write your age, you really ought to know who these people were because, seriously: They were the ones running your country only one generation ago.

Which is why history teachers across the English-speaking world engaged in mass facepalming on Monday, after the news media reported the death of former British Prime Minister Margaret Thatcher and a huge portion of the Internet responded: “Who?”

First came members of the Twitterati confusing Thatcher with hippie-musician-turned-movie-star Cher, by reading the hashtag #Nowthatchersdead as “now that Cher’s dead” rather than “now Thatcher’s dead.”

Certain Twitter fans of the boyband One Direction achieved viral fame over their complete ignorance of Britain’s only female prime minister, or even of the fact that she was a “she.”  Perhaps the tweet “may he rest in peace” was merely a typo missing an “s,” but that excuse won’t work for the young man who saw the question “Who’s that” and responded “It’s market thatcher something to do with our queen.”

Not that One Direction fans have any monopoly on Thatcher ignorance. A new Tumblr called “Wait, who is Margaret Thatcher anyway?” never actually answers that question, but instead collects examples of people asking it. Like this tweet, which asks “Am I the only one who doesn’t know who Margaret Thatcher is or what she’s done wrong?”

No, you’re not. So far, the online response is turning out pretty much the way Martin Belam predicted it would last December, when he tweeted this pie chart showing “What Twitter will look like on the day that Thatcher dies.” 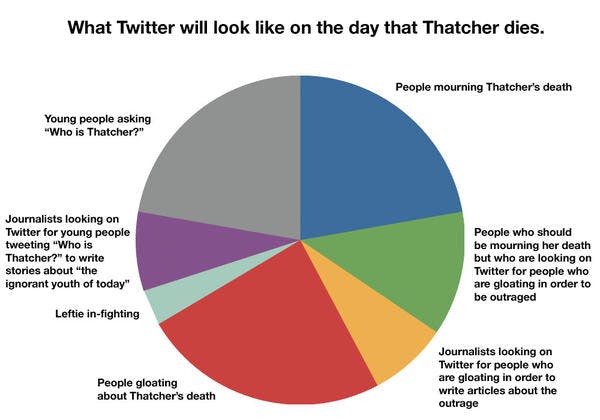 Young people asking who Thatcher was get just under a quarter of the pie. We thought this article here fell under the purple category, “Journalists looking on Twitter for young people tweeting ‘Who is Thatcher’ to write stories about ‘the ignorant youth of today’,” but many of the confused tweets we saw seem to come from people older than we are.