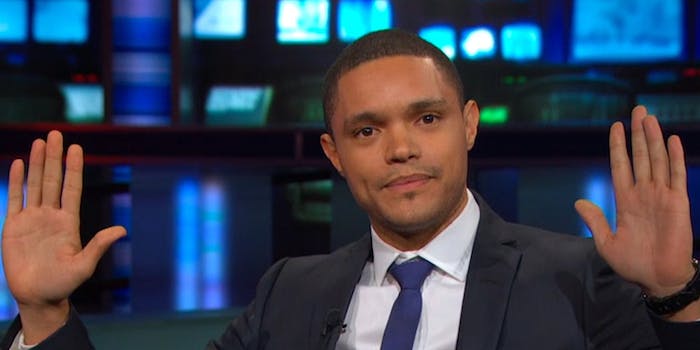 Trevor Noah, Lena Dunham, and the troubling persistence of anti-Semitism

Their jokes were wrong. But the defense on Twitter was even worse.

Earlier this week, it was revealed that 31-year-old South African comedian Trevor Noah would be assuming Jon Stewart’s position as the host of The Daily Show. Less than 12 hours later, however, a few vaguely edgy jokes that Noah had made on Twitter surfaced online. Although the jokes were a few years old and were largely of the Patton Oswalt-acolyte frat boy variety, the ones that received the most attention made fun of overweight women, domestic violence, and, most frequently, Jews:

He also defended the usage of the word “untermensch,” which the Nazis typically used to describe “subhuman” Jews and Slavic people:

Given the nature of the Internet outrage cycle, it wasn’t so shocking that people immediately started accusing Noah of being a rabid misogynist and anti-Semite, despite the fact that Noah is a quarter Jewish. But it was somewhat surprising to see how many people were willing to give Noah a pass, simply because he had made fun of Jews:

and you want to make #TrevorNoah look like a racist?! funny how u choose 2 only pick out the Israeli/Jews jokes. seriously GET. A. LIFE.

@_alli_ @efredman how many comedians makes jokes about Jews, Arabs, Africans? Maybe its because Trevor Noah is black. You are racist.

As a Jewish woman, I can’t say I was mortally offended by Noah’s tweets (with the possible exception of the one about how Jewish girls don’t like to give oral, which contradicts the very core of my value system). I also believe the reaction to the tweets has been vastly overblown. As far as I can tell, Noah’s only crime is not being particularly funny on Twitter.

But I do find it interesting that Noah has gotten flak for mocking Jews, in part because there was a similar social media response to an essay published by Lena Dunham in the New Yorker last week. The essay, “Dog or Jewish Boyfriend?: A Quiz” asked if statements like “he doesn’t tip” or “he has asthma” was in reference to a dog or a Jewish man.

The piece was clearly intended to be tongue-in-cheek, and few of the jokes were much edgier than what you’d hear in a 1950s Borscht Belt comic’s routine (which speaks to how fresh and original the premise of the piece was). But although Dunham herself is half-Jewish and dating a Jewish man, the essay enraged conservatives and members of the Anti-Defamation League, which issued a press release accusing the half-Jewish Dunham of being “tasteless” and perpetuating “offensive stereotypes about Jewish men.”

“The piece is particularly troubling because it evokes memories of the ‘No Jews or Dogs Allowed’ signs from our own early history in this country, and also because, in a much more sinister way, many in the Muslim world today hatefully refer to Jews as ‘dogs,’” ADL director Abraham Foxman wrote. Had Dunham been quoting from The Protocols of the Elders of Zion directly after making a Jewish mother joke, Foxman’s argument might have some merit; as it stands now, however, it’s pretty clearly an overreach to say that Dunham was implicitly endorsing Nazi ideology.

But on social media, with the exception of a few people who just clearly don’t like Lena Dunham to begin with, the reaction was markedly different. Everyone seemed to agree that the article traded in stale stereotypes about Jews (which it did) and that it was generally unfunny (which it was). But most were quick to say that just because Lena Dunham had made a few anti-Semitic jokes, that couldn’t possibly mean she was anti-Semitic:

If you're spending Friday night on Twitter calling a humorous Lena Dunham essay in the New Yorker Anti-Semitic it may be time to reevaluate.

If Dunham had written a piece comparing her African-American, Muslim, or Asian boyfriend to a dog, no one would be saying that Dunham wasn’t racist, Islamophobic, or anti-Asian. But making a few half-baked jokes about Jewish men being cheap hypochondriacs doesn’t just make you not anti-Semitic. It makes you a writer with a New Yorker byline.

We seem to be under the general impression that someone like Dunham or Noah can make a joke that can be read as anti-Semitic without being anti-Semitic themselves, because being anti-Semitic is just not a thing a person can be anymore. To a certain extent, this line of reasoning makes sense; the Jewish-American assimilation project has been wildly successful over the past century, to the point where Jews are no longer considered “other” in many parts of the country. In fact, if you grow up in certain highly Jewish, cosseted parts of the East Coast, as I did, it’s not uncommon for Jews to grow up thinking that being non-Jewish is “other.”

Jews are now considered no different than any other kind of white people, so it’s easy to grow up in certain parts of the country and forget that not long ago, Jews were not considered white in this country and that they were were barred from entering various professions and universities; it’s easy to forget that anti-Semitism is, in fact, still a thing.

There seems to be this general consensus that the United States has evolved past our cultural history of anti-Semitism and that it’s an embarrassing remnant of a bygone, unsophisticated era, like scrunchies or VHS tapes or CD-ROMs. So when people like Noah or Dunham make jokes that reference cringe-worthy anti-Jewish stereotypes, the inclination is to call them “lazy” or “unfunny,” rather than explicitly referring to them as anti-Semitic. If Jews are safe from persecution in this country, as we have been told since birth, then anti-Semitism simply doesn’t exist. If it doesn’t exist, then it doesn’t make sense that the two leading voices of progressive political satire in this country could harbor anti-Semitic views.

It’s easy to forget that anti-Semitism is, in fact, still a thing.

This is not just because we see evidence of renewed, violent anti-Semitic sentiment popping up time and again in Europe, Belgium, France, and London or because there are bomb threats in yeshivas and synagogues in Miami, Houston, and Los Angeles. They could be anti-Semitic because there are still people out there who really fucking hate Jews. And this is something that I am concerned the rest of the country is in danger of forgetting.

As a Jew growing up in New York City, I grew up believing the following two things: 1) that I am a Jew, so everyone in the history of mankind has wanted me dead, which means that I am a historically predetermined victim, and 2) that no one wants me dead any longer, because the Holocaust and Israel and never again and you live in New York City, where there are so many Jews per capita that the guy who plays Santa Claus at Macy’s is probably Jewish, so just don’t worry about it.

Being told that the world is full of people who want me dead, but I’ll never have to directly deal with them, results in an odd kind of cognitive dissonance. You’re hyper-aware of anything that could be remotely perceived as anti-Semitic, but you find it hard to believe that anyone you know could possibly feel that way about you.

But as I’ve gotten older and taken my first few tentative steps outside the eastern seaboard, I’ve realized that’s not true. I’ve been to Ireland and had numerous drunk bar patrons ask me where my horns were. I’ve had a boyfriend tell me his parents didn’t approve of our relationship because I was Jewish and, thus, more inclined to be dishonest and manipulative; I’ve argued with a former roommate about whether the Holocaust was “as bad as that Elie Wiesel book.”

And I’ve listened to my partner’s grandmother, an Auschwitz survivor who worked in the camps, describe in a taped interview how she witnessed guards getting drunk on Schnapps, throwing Jewish babies in the air, and shooting them for sport.

I’ve had a boyfriend tell me his parents didn’t approve of our relationship because I was Jewish and, thus, more inclined to be dishonest and manipulative.

I don’t like to think of myself as a historically predetermined victim, and I don’t like to think of celebrities like Noah and Dunham harboring ugly, hateful sentiments about a group of people. However, we shouldn’t be so quick to dismiss the possibility that they, or anyone else, for that matter, might. Because maybe they were just trying to be funny, but then again, so were the Charlie Hebdo cartoonists who drew offensive sketches of Muslims, white men who produced minstrel shows at the turn of the century, or the propagandists who made caricatures of hook-nosed rabbis in Berlin in the 1930s.

There is a sharp distinction between a subversive joke, and something that’s merely offensive, existing purely for the sake of hurting people’s feelings. In truth, Noah’s tweets about billionaire Jews and JAPs who don’t like to go down were neither; they were just stupid. But that doesn’t mean that there aren’t folks out there who agree with the underlying sentiments. Before the outrage cycle starts churning anew and we find a new vaguely offensive tweet to embed in all our self-righteous thinkpieces, we should think about those people first.