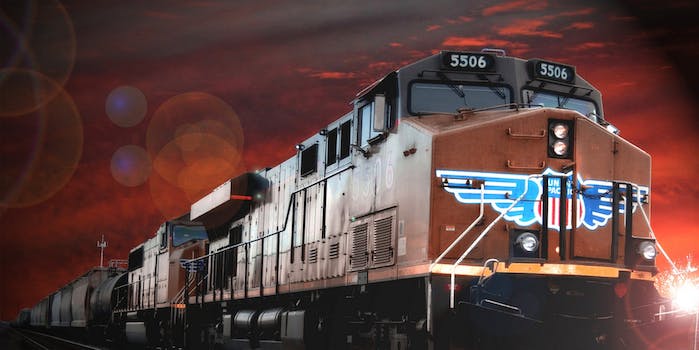 How tech could make trains safer—and why it never will

It’s up to the owners of an increasingly outdated technology to judge if it’s worth it.

If you’ve ever watched footage of self-driving cars—or seen them in a movie—they appear to be moving on rails, gliding along the road as if they were less a single vehicle and more a tram on a predetermined path. This raises the question: What about the vehicles that are already on rails? Trains and subways are a central part of our infrastructure, both for commercial and civilian purposes. Why are they still driven by people when even our cars will one day soon be fully automated?

Like car accidents, train accidents are on the decline. This is despite several recent high-profile incidents, like the southern California commuter train that hit a truck and derailed earlier this week, injuring 30 passengers. Last week, a CSX freight derailed in West Virginia, sending thousands of gallons of crude oil into nearby creeks and forcing 60 people to evacuate their homes. Earlier this month, seven people were killed when a Metro-North train struck a vehicle parked on the tracks.

Freight train accidents are becoming a very clear danger as more and more crude oil is shipped across U.S. rails. Natural gas booms in North Dakota and New York have sent millions of gallons of oil across the country on railroads deficient by any infrastructure standard. Just this week, the federal government issued a report predicting the U.S. will see 10 derailments of fuel-carrying loads per year for the next twenty years, costing companies and local communities over $4 billion in damage.

Amid the debate over the proposed Keystone XL pipeline—which would ship crude oil from Canada to refineries in Texas—is the load pipelines can take off of our struggling rail systems. Chemical and gas leaks are far more common on rail systems than on pipelines (though pipelines spill more when they do leak) and present a growing risk to both the environment and human communities. Amid the resurgent energy industry in the U.S., trains are moving a million barrels of oil a day on rails considered widely deficient.

Many of the accidents on both commercial and commuter rails are entirely preventable with existing technologies. In fact, this week’s accident in California could have been avoided; so-called “collision energy management technology” essentially design the front car to crumple and disperse the energy of a collision evenly across all cars, preventing a derailment. However, more advanced communications systems between trains, wayside stations, and even the tracks themselves could not just lessen the damage of an accident but stop it altogether.

Positive Train Control is largely the self-driving train come to life. The technology uses GPS and route guidance to alert a computer within the train of rail conditions and appropriate speed levels. If the train tries to go too fast, like this Metro-North train that derailed after hitting a 30 MPH turn at 82 MPH, PTC limits the trains capabilities to ensure safety. According to a Department of Transportation report, PTC could prevent up to $91 million worth of accidents per year.

While infrastructure deficiencies are the highest cause of train accidents in the U.S., human error still accounts for 28 percent of all train accidents. Most famously, a 2008 derailment of a passenger train was caused by the engineer texting at the time of the incident, costing 25 lives and over 100 injuries. The high fatality of the incident led to the passing of the U.S. Rail Safety Improvement Act of 2008. As one of its major provisions, the law demands the full implementation of PTC across all railways in the U.S. by the end of 2015, bringing railways into the 21st century and saving untold lives and money in the future.

This all would be fantastic if PTC systems weren’t such a massive expense in an industry already struggling to make do. The full implementation is a daunting task that could cost up to $22 billion, money railroad and train companies are expected to raise themselves without the help of the federal government. The railroad industry has largely called PTC a waste of money, somewhat cynically being forced to choose how much money they’re willing to spend to save the lives PTC could.

In many ways, it mirrors the proposed automation of the New York City subway system, an attempt to follow the success of European metro rail lines like those in Paris and Barcelona. For the most part, automated commuter systems in the U.S. are limited to airports and monorails, but the New York MTA has attempted for decades to implement communication-based train control (CBTC) to make trains more efficient, less faulty, and more prepared to prevent accidents.

The vast expenses for making trains safer across the board are almost incalculable; the fixes to infrastructure, the largest cause of accidents, are prevented by an ever-interlocking cacophony of rail ownership and responsibility. The Federal Railroad Administration does give out $35 billion in loans per year, but companies often find themselves stuck between funding rail improvements or implementing the PTC standards, both options meant to save lives and make rails more efficient as a whole.

Looming over the entire debate, however, is the coming changes technology stands to bring to transportation and shipping as a whole. Last autumn, Mercedes unveiled a self-driving concept semi which stands to give trucks the same convenience as railroads for shipping—except cheaper, safer, and faster. Similarly, package delivery company DHL considers itself in the “pole position” to utilize autonomous vehicles in maximizing its own shipping fleet. Commuter rails are also being challenged by ride-hailing apps like Uber and Lyft in major metropolitan areas, with the former even opening its own lab to replace its fleet of drivers with robots.

Whether these futuristic technologies could replace our reliance on outdated rail systems remains to be seen. But the hurdles in front of current technologies might mean we could see automated roads before we see automated rails. While more people die in car accidents, rail accidents kill about as many people per mile traveled as cars do. The ethical quandary is in front of the railroad industry, as is the technology that could help save lives and the environment. It’s up to the owners of an increasingly outdated technology to judge if it’s worth it.

Photo via locosteve/Flickr (CC BY 2.0)