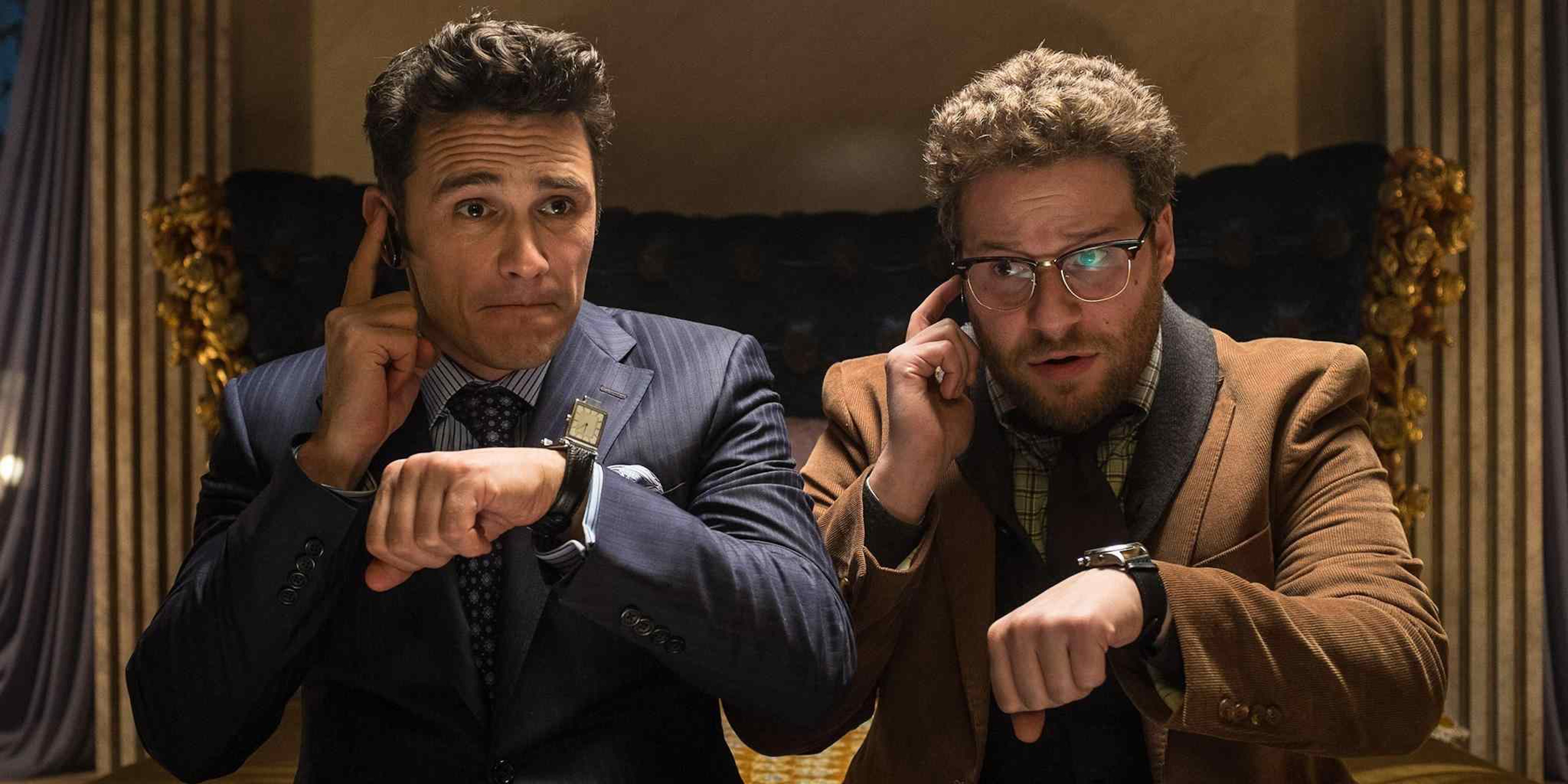 James Franco has always pulled stunts. But this time, has he gone too far?

Like seemingly every week, James Franco is having a busy week. The actor turned degree hoarder turned blogger turned novelist turned Lindsay Lohan sex-denier took time off from sleeping through his lectures to flash the Internet and piss off North Korea. In a statement, North Korea’s foreign ministry spokesman declared Franco’s new film, The Interview, about the assassination of Kim Jong-Un, to be an “act of war.” The statement further promised a “resolute and merciless response” should the U.S. government not ban the film. Given the fact that North Korea recently referred to Obama as a “wicked black monkey,” this is unlikely.

I never thought I’d say this in a million years, but North Korea has a point. Comedy has long held a place for satires of dictatorship. The Marx Brothers’ Duck Soup and Charlie Chaplin’s The Great Dictator famously lampooned the rise of fascism in Europe, the latter helping galvanize a response to Germany’s atrocities at a time when the U.S. had yet to declare war. It was an important moment of cinematic activism, but actual politics seem to be little on James Franco’s mind. To put it lightly, James Franco is no Charlie Chaplin. The Interview is nothing more than a dangerously irresponsible stunt designed to exploit a very tense political situation for free publicity.

If you find that cynical, remember that this is the same man who likely staged an unsuccessful pickup of a 17-year-old girl on Instagram just to remind us that he had a movie coming out. In the wake of the scandal, Franco blamed the faux pas on being new to social media, his equivalent of a closeted guy saying he’s “never done this before.” Uh-huh. That explanation doesn’t hold up when Franco routinely trolls his own Instagram followers with nearly nude selfies, only to get the Internet to hypothesize about what he’s doing before he takes the photos down. After over 2,000 posts, Franco has now racked up 1.6 million followers by playing peek-a-boo with America’s celebrity obsession.

Franco is the master of doing things “just because you can,” like publishing a Vice story about his night with a girl he instructs us to call “Lindsay,” one in which he describes reading Salinger to her. As Gawker’s Michelle Dean explained, Franco’s sort-of-fiction essay isn’t just your average, run-of-the-mill bad writing. “James Franco’s crime is not merely that he is a bad writer, but he is a bad writer who has had the benefit of tutelage at many of this country’s serious literary and intellectual institutions,” Dean noted. “When he writes badly he is writing informedly badly. He uses recognizable techniques and then warps them into idiocy in the application. He is a walking advertisement for the idea that talented, intelligent fiction-writing simply can’t be bought.”

In a response to Dean’s essay, Flavorwire’s Jason Diamond argued that it doesn’t matter now bad James Franco’s sub-Salinger prose is (and putting them in the same sentence is an act of charity), he’s still going to get published anyway. “Nobody will stop Franco because the literary world, it seems, sees associating with Franco as a boon rather than a bane,” Diamond said. “In a world where content is king, James Franco is a big celebrity who produces a lot of content. None of it is any good, so far, but he hosted the Oscars and he wants to be on your masthead. Saying no is pretty difficult.”

For anyone who has read Palo Alto, Franco’s debut novel, it’s glaringly obvious that the book wouldn’t have ever been published if not for its author’s name. The book frequently mistakes reproducing racism and sexism for commentary on these issues and being a white male celebrity for having something to say. Palo Alto is the most unintentionally hilarious piece of writing since E.L. James’ mega best-seller Fifty Shades of Grey, which at least wasn’t trying to be deep; it just wanted to get you off. One would assume Franco is trying very hard, if we weren’t completely aware that he’s not trying at all, a book that serves only to get himself off.

Palo Alto and Fifty Shades of Grey actually share much in common, other than being books developed into feature films. Both rely on absurd phrasing to get their story across, written with a stunning lack of self-awareness. Whereas James describes penises as a man’s “considerable length” and relies on the same five or six repeated phrases to prop up her prose, Franco really likes to overuse the word “handsome,” so much so it could be its own drinking game. For example, Franco describes one of his characters, Bill, as “handsome but retarded.”

But in addition to handsome men, Franco really loves urine. In “Killing Animals,” he concocts this doozy of a passage. “Farmers, Italians, and sociopaths kill cats,” Franco muses. “Sociopaths piss in their beds. French people use piss as perfume. I had a black and white cat named Toby. When he was young, the neighbor cut his balls off for eating fish from his pond. I wasn’t born with that happened.” But his watersports obsession doesn’t stop here. In “Lockheed,” James Franco sets up a scene for the ages. “He was standing behind one of the cars in the driveway,” Franco writes. “I was about to say hi, but then I realized he was probably peeing.”

The whole book is like this, constructed in a way that appears to be barely written or edited while proclaiming to be deadly serious. But James Franco wasn’t alone in thinking James Franco may be the voice of his generation—or at least a voice of a generation, to borrow a line from Girls. Vogue called it “delightfully coarse” yet “compelling and gutsy,” while Elle found Palo Alto to be “raw and funny sad.” Salon argued that Franco “excels at dialogue,” and USA Today felt that he “writes with such deep empathy and affinity that one has to wonder if he lived this life.” But the best review comes from the New York Review of Books, who reminds readers that, yes, this is “literature,” just in case they forgot. That’s like praising something for being, in fact, a book.

However, it’s not just critics that are enabling James Franco’s continued foray into egotism. Franco currently is scheduled to appear in 15 films, including the new works from famed auteurs Werner Herzog and Wim Wenders. Whereas actors who aren’t white, male, and James Franco would kill to be in any movie, Franco appears in a half dozen for fun, despite not being any good in a vast majority of them. While turning in a mesmerizing performance in Spring Breakers and not overtly ruining Milk, James Franco was barely there in Spider-Man, Rise of the Planet of the Apes, and Oz the Great and Powerful, smirking all the way to the bank.

A New York Times op-ed James Franco wrote on Shia LeBeouf (which is, of course, actually about himself) shines a light on Franco’s motivations, in which he waxes nostalgic about Marlon Brando and “acts of rebellion” against the industry. While Brando was one of cinema’s great actors (and a personal favorite of mine), Marlon Brando was famously difficult to work with—delaying productions, refusing to read scripts, and being an overall pain in the ass. These antics, of course, make him a perfect idol for James Franco. He wrote:

Off-screen he defied the studio system’s control over his image, allowing his weight to fluctuate, choosing roles that were considered beneath him and turning down the Oscar for best actor in 1973. These were acts of rebellion against an industry that practically forces an actor to identify with his persona while at the same time repeatedly wresting it from him. In 2009, when I joined the soap opera ‘General Hospital’ at the same time as I was working on films that would receive Oscar nominations and other critical acclaim, my decision was in part an effort to jar expectations of what a film actor does and to undermine the tacit—or not so tacit—hierarchy of entertainment.

Franco appears to have learned the wrong lesson from an acting heavyweight. Whereas Brando conscientiously objected to the burgeoning Hollywood system, James Franco is trolling it from the inside—but the problem is that he’s trolling the wrong projects. Rise of the Planet of the Apes was a surprisingly strong, critically acclaimed sleeper hit that succeeded without any help from its star—a movie that worked in spite of James Franco, rather than because of him. Oz the Great and Powerful initially cast Robert Downey Jr. in the role of the wizard, and with Franco in his place, the movie felt like a sick joke, a giant middle finger to everyone who hoped the film might reclaim even a fraction of the original’s magic.

James Franco knows that he can get away with it—because he’s a handsome, A-list actor, which means he can get away with almost anything and we’ll shrug along with him. After Franco’s Instagram scandal, Kelly Ripa assured him that “it happens to everybody,” and should he decide to capitalize off of another actress’ troubled history with a thinly veiled essay, he can be sure it will find a home and an appreciative audience of enablers. In a media age desperate for traffic, he’s made himself into human click-bait, baring his bottom for the Internet’s attention. After all, more people will likely see his unclothed derriere or read about the North Korea controversy than actually watch The Interview.

If I have one recommendation for Kim Jong-Un, don’t take the warbait. You’ll only make our international James Franco crisis worse.

Photo via The Interview Trailer/YouTube