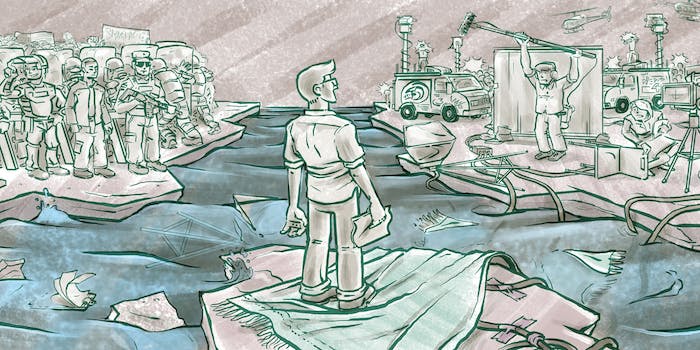 The uncertain future of the celebrity whistleblower

When outing U.S. government information means going public, how does that change our relationship to whistleblowers?

Edward Snowden’s asylum application was just renewed in Russia for three additional years—with the outcome bound to have a bearing on already tense U.S.-Russian relations, as the American government still wants Snowden brought to justice. If not for the extension, Snowden would have joined his compatriot, Chelsea Manning, in the U.S. judicial system, answering for what some call treachery and others call a public service.

Their renegade status has riveted the world, but is the concept of a celebrity whistleblower that they helped pioneer on the way out?

In 1972, Deep Throat, later revealed as FBI insider Mark Felt, marked an iconic moment in whistleblowing by stepping forward with key documents in the Watergate scandal—and by remaining anonymous in the process. What happened between then and now to create a culture of celebrity around whistleblowing, and will the harsh penalties for people like Manning force whistleblowers back underground—or, worse yet, into silence? These questions raise important issues not only about the function and future of revealing information others long to keep hidden but also about the costs and benefits of living in a free society.

Long used as a tool to reveal corruption and other crimes, whistleblowing has become an important part of society, as have the calls for accountability that stem from it. We call the people willing to speak truth to power heroes and patriots, whether they’re revealing abuse in care homes or drawing back the curtain on a bizarre scandal at the U.S. Minerals Management Service. It’s also been a powerful voice for those defying their governments and those angry with the way their governments have been treating their citizens.

In nations like the U.S., whistleblowers have some legal protections through workplace law as well as freedom of the press. Outside the U.S., whistleblowers are not so fortunate, risking their employment and even their lives to speak out about issues of concern. In a climate where whistleblowing is theoretically less dangerous, people are encouraged to step forward about abuses and concerns—but until recently, they did so largely anonymously, focused on staying out of the limelight while the information was processed and distributed, for a variety of reasons.

The entire concept of a celebrity whistleblower is somewhat bizarre. It speaks, perhaps, to the culture we’re living in today, in which everyone is in search of their 15 minutes. That desire for recognition is almost total across groups and social classes. Nearly everyone wants to see and be seen, in an atmosphere that becomes almost performative.

This is a society where when you order something online, the order confirmation asks you if you want to tweet it, sharing your purchase with the world. People are encouraged to Instagram their meals, to track every moment of their lives right down to their personal fitness routines. In a strange way, there is a sense that if something is not both documented and publicized, it didn’t really occur, and it didn’t matter. Larger questions about whether people are too caught up in documenting the moment to actually experience it have been around for decades (the rise of the affordable camera certainly contributed to those conversations), but the issue seems more acute than ever. “Pics or it didn’t happen” is a watchword on the Internet for a reason.

What’s more important: Getting the credit and becoming known, or getting the job done? It’s a question that whistleblowers in years past have found it easy to answer, as their main goal involved getting information out to the world or to the appropriate people. While whistleblowing protections offer shelter for those who report problems with workplace conditions and legal issues, no such protections exist for those like Snowden and Manning, who chose to reveal classified information to the public and out themselves in the process. They both made potentially dangerous moves, and thus, we need to ask why they made that decision.

Was their decision to flout journalistic privilege designed to protect the publications who ran their work, allowing newspapers like the Guardian to avoid being caught between a rock and a hard place as governments pressured them to reveal their sources? Did they do so as an act of self-protection, thinking that reprisals would be challenging if the public knew who they were, making it hard for the government to simply disappear them from view? Or did they do it because they wanted their names associated with the data they released, and they were passionate about becoming known as warriors for justice, not content to live in obscurity?

It may be a combination of some or all of the above, but it’s worth picking these issues apart. Journalists have been under increasing pressure in recent years to reveal their sources, even in the West, where they are supposedly privileged. Jana Winter was jailed for not revealing her source in a story on murderer James Holmes. Judith Miller was also imprisoned for refusing to name a covert CIA operative, and New York Times reporter James Risen’s sentence for his work on the Central Intelligence Agency is still in the appeal process.

When the Guardian agreed to run Manning’s trove of documents after it had been published on Wikileaks, were concerns raised about the safety of journalists and the publication as a whole? Did she realize the risk of exposing herself as the source of the leaks to Adrian Lamo, who identified himself as a journalist—or was that danger part of the appeal?

Self-protection is also a considerable component in cases like these, especially since both Manning and Snowden dealt with and revealed confidential government documents, as did Julian Assange and others like them. Those who argue that their actions were anything but patriotic, and may in fact have endangered American intelligence officers and operations, are not a minority in the United States, and many of them work for government agencies. Had they remained anonymous, is it possible that they could have disappeared in closed trials and federal prisons, denied the media exposure that accompanied their leaks? Is it also possible that their information might never have been published in the first place?

In this era, the siren song of fame shouldn’t be understated, whether people are hoping their latest cat video will go viral, struggling to make it in Hollywood, or producing news. Work seems less worthy when it’s presented anonymously; there may have been a sense on Snowden’s part that it wouldn’t be enough to be praised as an abstract, anonymous individual, and both Manning and Snowden have clearly basked in their attention from the public. Although Manning’s identity was revealed by Adrian Lamo, she made the choice to out herself to him—becoming an inextricable part of the story itself.

This is a decision made by all public whistleblowers, and it’s a fascinating conundrum. Surely, there is something thrilling about the act of disclosure and recognition, but also, it detracts from the importance of the story when it comes to making key revelations about what the government is doing to members of the public—and to the rest of the world. Which is more important, the story of “Breanna” Manning, or the documents she brought forth?

Not long ago, many newspapers ran articles without bylines, or with initials only. Today, very few publications retain their tradition, making journalists into personalities, not just writers and conveyors of information and opinion. Only a few die-hards, like the Economist, think the story is more important than the author, with writers relying on their work to drive itself rather than their personalities to draw their audience. As such, they’re working for the good of a larger whole and the benefit of their readers, in a model of journalism that many think is outmoded.

To those trapped in the personality approach of journalism, this might seem bizarre. The idea of running a piece without a byline, without recognition, without the easy and free publicity embedded in having your name at the top of an article and your bio at the bottom, is utter anathema. Yet, there is something to be said of the divorce of personality from work, the decision to focus readers on what is actually being written and conveyed, rather than who wrote it.

The same may hold true for whistleblowers, as the identity of a whistleblower inevitably colors the information being brought forth. The distinction between total anonymity and total openness is considerable, and understanding who a whistleblower is forever changes how readers and journalists relate to the work. In the middle ground, a whistleblower known by a handful of non-identifying characteristics, such as the vague “senior White House official” or “covert CIA operative” has enough context to offer verisimilitude, but not enough to distract readers.

Conversely, of course, the lack of context provided by anonymity doesn’t allow readers to determine whether documents are being released out of spite or whether their release involves a breach of trust by a disgruntled and angry employee. Instead, they have to trust the publication and journalist handling the reporting to sift through the documentation, verify it by independent means, and determine whether the source is holding out or advancing an agenda. Are members of the public willing to do that, and should they be, given that every publication has its own slant, albeit at varying degrees? (The Guardian, for example, is known for its leftist political leanings.)

The question may be not so much whether the era of the public whistleblower is over, but whether it should be over. What benefit does publicity provide not for whistleblowers, but for members of the public and the larger cause? If this question can’t be easily answered, and the benefit loops back around to the whistleblower, it might be time to examine the motivations of those who approach the public with confidential information and outings of key material. It’s also worth exploring whether an ultimately self-serving move can still provide a larger public benefit.

It’s likely that Manning and Snowden will never hurt for attention, invitations to speak, and public support (in Manning’s case, when she gets out of prison). Their decision to attach a name to whistleblowing essentially wrote their ticket, and at some level, they were aware of the consequences. In that light, how does knowing their identities change your relationship to the information they brought to the light of day?