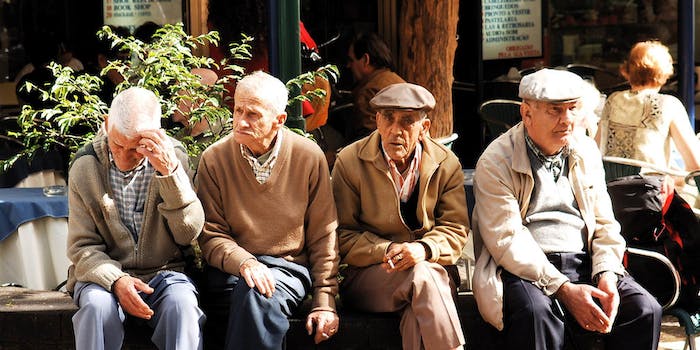 Brace yourself: You might be about to agree with Donald Trump on something.

Believe it or not, there is a line that Donald Trump refuses to cross. As he has made clear in debates and speeches, he parts ways with the other Republican candidates over the touchy subject of Social Security reform. “Every Republican wants to do a big number on Social Security, they do it on Medicare, they want to do it on Medicaid,” he explained in April. “And we can’t do that. And it’s not fair to the people that have been paying in for years and now all of the sudden they want to be cut.”

While Trump’s position on this issue is commendable, it shouldn’t obscure the real problem in America today—a job market in which ordinary people are overworked and kicked to the curb. The idea that it is acceptable to renege on a financial promise made to an entire generation of Americans from their very first paycheck, then force them to work for the rest of their lives, is merely one manifestation of this larger issue.

It’s a problem perhaps best exemplified by the revelations about Amazon. Run by CEO Jeff Bezos, whose alleged mantra is “If you aren’t working at least 60 hours a week, you aren’t working,” Amazon is notorious for working its employees to the bone. Centered in Breinigsville, Pennsylvania, Amazon demands 100 percent productivity rates from its employees and threatens to take away their jobs if they fail to comply with that unreasonable demand.

The company is also notorious for finding ways to keep employees on the clock without paying them, such as unpaid security screenings. The company is also known to force workers out of their jobs when they need emergency personal time, such as dealing with life-threatening illnesses or miscarriages.

This is symptomatic of a larger national problem. As one article for Mother Jones explained with a series of charts, productivity has surged in America since 1970 even as the median household income has plateaued (if it had kept pace with our national economic growth, it would be $92,000 rather than $50,000 a year).

Similarly, America is one of only 16 countries that doesn’t require businesses to give their employees time off, one of only nine that doesn’t mandate paid annual leave, and one of only six that doesn’t guarantee paid maternity leave. Not surprisingly, a recent survey by the Families and Work Institute found that 57 percent of American workers feel overworked or overwhelmed due to the increasing demands of their jobs.

The cause of this overworking is not that employees want to be busier but that employers see it as more profitable to demand too much of a small work force than ask for a reasonable expenditure of energy from a larger one. Although American economic output has more or less returned to pre-recession levels, more workers lost their jobs and fewer were hired back here than in any other G7 country.

Corporate profits have increased 22 percent since 2007, with productivity doubling during the recession years precisely because companies have been able to exploit America’s weak labor laws to take advantage of their workers. As Erica Groshen, a vice president of the Federal Reserve Bank of New York, explained in an interview with the Associated Press, it’s easier for American employers “to avoid adding permanent jobs” because “they’re less constrained by traditional human-resources practices [translation: decency] or union contracts.”

Not surprisingly, a recent survey by the Families and Work Institute found that 57 percent of American workers feel overworked or overwhelmed due to the increasing demands of their jobs.

If you think this makes Americans better at their jobs, think again. A study published by Stanford University discovered that productivity sharply declines after employees have worked more than 50 hours in a week, eventually becoming non-existent in every hour that they work after the 55-hour mark. Overworking also impairs employee judgment (making them more likely to do their work poorly) and can be detrimental to their physical and psychological health.

Despite this, of course, a Gallup poll has found that the average American works 47 hours a week, with more than four out of 10 clocking in more than 50 hours at their employers’ demand.

The problem of American overwork can be directly tied into the impending retirement crisis. Due to the faltering economy, working Americans have not been able to save as much as they used to; median household retirement savings for 55- to 64-year-old Americans in 2013 amounted to a mere $14,500. As a result, when it comes time to retire, many Americans simply won’t be able to support themselves on the average monthly payment of $1,300—a particularly sobering thought considering that the average 65-year-old is expected to live for almost 20 years after that point.

Exacerbating this is the gradual disappearance of direct-benefit pension plans, which used to guarantee workers an annual income after they retire. Although more than half of Fortune 500 companies offered new hires a direct-benefit plan in 1998, that number fell to only seven percent by 2013.

“Taking their place are defined-contribution plans, the 401(k)s and other such plans in which employers put money into an investment account in the worker’s name,” explains Christopher Flavelle of Bloomberg View. “In theory, employees can still save enough for retirement—if they put enough away, invest it wisely and engage in reasonable planning. But that’s not what usually happens.”

Because these individually-managed retirement plans are complicated, it is exceptionally difficult for employees to manage them without some level of training from their employers. Although polls indicate that most employers know their workers aren’t knowledgeable about these things, they prefer the cost-cutting advantages of defined-contribution plans anyway.

The problem of American overwork can be directly tied into the impending retirement crisis.

One way to get around this would be to increase Social Security benefits, a move that would be supported by 64 percent of Americans. The best way for Social Security benefits to be increased along with the cost of living is to either raise or eliminate the payroll tax cap. This would only impact America’s wealthiest citizens (a majority of whom want to cut Social Security), but their influence is enough to give them considerable pull over most of the Republican Party.

However, the fact that every Republican presidential candidate besides Trump has advocated raising the retirement age indicates that our society has begun to accept the idea that retirement isn’t necessary and that it is acceptable to force someone to quite literally work until they die. It may make you shudder to admit that Trump is right about something, but it ought to disturb us even more that our culture has reached a point where Donald Trump looks like the sane one.