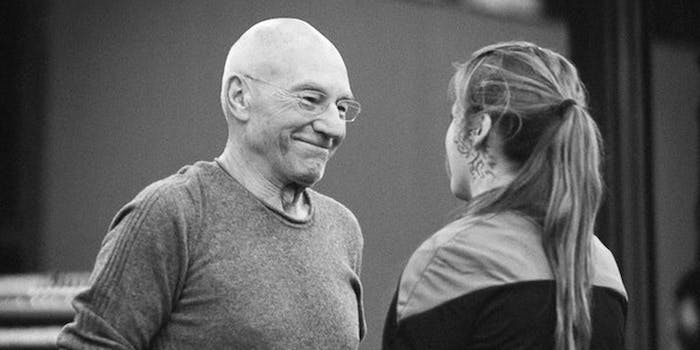 You have to see this personal speech the former Star Trek star gave Houston's Comicpalooza.

Years after sitting in the captain’s chair, Sir Patrick Stewart still has the ability to lead and inspire.

The Star Trek: Next Generation star was the guest of honor at Houston’s Comicpalooza, and he floored attendees with his honesty and one memorable interaction with a fan.

During a Q&A at the convention, Heather Skye first thanked him for a speech he gave at Amnesty International about domestic violence towards women, which had helped her deal with her own personal experience.

“After thanking him I asked him ‘Besides acting, what are you most proud of that you have done in your life (that you are willing to share with us)?'” Skye recounted on Tumblr.

Stewart explained that his work with an organization called Refuge, which provides safe houses for women and children to escape from abusive households, stemmed from his childhood. Stewart’s father suffered from what is now known as post-traumatic stress disorder following combat in World War II.

He and his older brother were powerless to help their mother back then, but now he’s able to try to stop violence towards women in his mother’s name. Stewart also works with Combat Stress, which helps soldiers with PTSD for his father.

After answering the question, Stewart looked towards Skye and asked, “Are you okay?” She explained that she was finally able to move on from that part of her life and accepting that she wasn’t at fault, which prompted a passionate call from Stewart, who recalled the men who told his mother that it was her fault that domestic violence happened to her.

“My mother did nothing to provoke that, and even if she had, violence is never ever a choice that a man should make,” Stewart shouted, leading to a standing ovation.

The moderator then asked Skye if she wanted a hug.

“Sir Patrick didn’t even hesitate, he smiled, hopped off the stage and came over to embrace me in a hug,” she wrote. “Which he held me there for a long while. He told me ‘You never have to go through that again, you’re safe now.'”