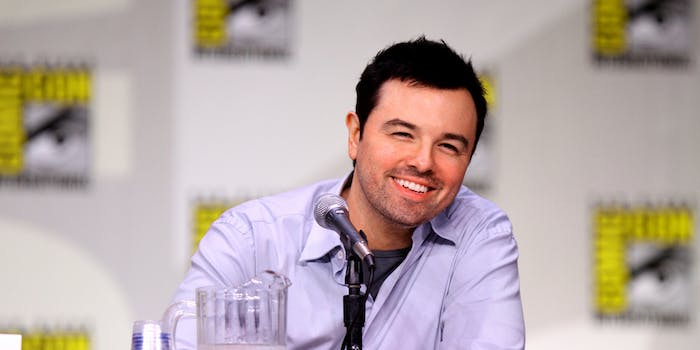 Is it too late to save ‘Family Guy’?

The show's quality has been decreasing in recent seasons, and there may be no end in sight.

On Sunday, Fox’s Family Guy kicked off its 13th season with “The Simpsons Guy,” the anticipated (well, by some) crossover episode that saw the Griffin family take a detour to The Simpsons’ Springfield to interact with Matt Groening’s beloved cast of misfits. This interaction sees everything from Peter and Homer engaging in one of MacFarlane’s now-infamous “chicken fights” to Stewie kidnapping Bart’s bully Nelson and locking him in a garage with a gag ball in his mouth, from even Lisa Simpson realizing that she can’t stand Mila Kunis’ Meg to a courtroom sequence that distinctly underlines just how similar the two shows’ universes have become over time.

It…was not great as a whole.

And while piling on a Seth MacFarlane endeavor on the Internet feels more and more like straddling a dead horse and pummeling its midsection with every passing day, the debate about MacFarlane’s merits has been renewed. Particularly when the episode starts off with an extended commentary on the “easily offended” (Peter is run out of Quahog for a sexist comic strip, and the show takes potshots at the politically correct mob mentality accordingly), it seems like MacFarlane is demanding the negative attention. If anything, it’s more surprising Matt Groening, historically protective of his landmark property, signed off on gags like Homer and Peter punching teeth and eyeballs out of each other’s heads, or Stewie’s attempted riff on Bart’s famous prank calls to Moe turning into him simply informing Moe that his sister is being raped.

The criticism has been right in line with the Internet discourse surrounding Family Guy (and in a different respect, The Simpsons) for some time now. Vox’s Todd VanDerWerff took the crossover’s initial gag to task on the basis that “it’s meant to be a commentary on the easy offense taken at shows like Family Guy by people on the internet, but it mostly comes off as pointless gloating by a show that seemingly can’t believe it’s crossed the decade mark.”

The A.V. Club’s Dennis Perkins goes further still, stating that “it was as competent a piece of corporate synergy as one could have hoped for.” He continues, “And I reject it completely. For all its accumulating faults heading into its second 25 years (or however long), The Simpsons’ Springfield has room, amidst all the wackiness, for character, and heart, and growth. These shows have different styles of comedy, fine. But only one of them is diminished for having been associated with the other.”

It’s a common refrain for vocal critics of the show. Where The Simpsons was always a show rooted in warmth, albeit warmth tinged with sarcasm and irreverence, Family Guy’s stocks in trade even in its early seasons were cynicism and self-awareness.

This isn’t meant as a commentary on the show’s quality, necessarily, but rather as an acknowledgment that the shows have very different perspectives on how to engage with the clichés of American culture. Because The Simpsons paints in more loving strokes, it’s easier to forgive its latter-day shortcomings than it is with a show infamous for comic standbys like its seeming per-episode rape joke quota. (This writer has recently watched seasons 11 and 12, and there’s legitimately at least one every episode.)

MacFarlane’s other productions, American Dad! and The Cleveland Show, hewed closer to The Simpsons’ model, but the former is being shipped off to TBS in the next few weeks and the latter was cancelled after four seasons with no shortage of drubbing from Family Guy itself.

Following audience reactions online on Sunday night was, in its own way, just as fascinating as the critical discussion. Where the latter has been predominantly negative to fluctuating degrees of severity, audiences were more split. The Huffington Post captured a small sample set of the reactions, and they stand as a pretty good representation of what various Twitter timelines looked like while the show was airing and immediately after its end. People either enjoyed seeing the Griffins take Springfield—or wish it had never existed at all.

But for the drubbing Family Guy frequently takes from critics and audiences alike, is there any way to save the show from its increasingly poor reputation? And perhaps more importantly, does it need to be saved at all? It’s important to remember that “The Simpsons Guy” was a Family Guy episode, not a Simpsons episode, and in that respect it factors into the larger discussion about the former’s declining quality. Mileage tends to vary as to the public opinion of when the show should have been cancelled, and even MacFarlane himself has acknowledged it may be getting long in the tooth.

In 2011, when the show had just started its 10th year, MacFarlane told The Hollywood Reporter, “Part of me thinks that Family Guy should have already ended. I think seven seasons is about the right lifespan for a TV series… I talk to the fans and in a way I’m kind of secretly hoping for them to say we’re done with it. There are plenty of people who say the show is kind of over the hill…but still the vast majority go pale in the face when I mention the possibility.” Many episodes from the show’s more recent years have reflexively commented on the show’s reputation as overcooked and its awareness of that fact alike.

But rarely has it been as pointed as it was on Sunday. The crossover ends with Stewie in his bedroom in Quahog once again, riffing on The Simpsons’ opening chalkboard gag with the foul-mouthed baby sobbing to himself while writing “I will not think about Bart” over and over again. It’s a truly self-loathing capper to an episode that sees Homer calling the show’s Pawtucket Patriot Ale out as a blatant imitation of Duff and regularly acknowledges Family Guy’s perceived decline in quality.

At Vulture, Matt Zoller Seitz points out that “this tragic self-knowledge might account, among other things, for the way the show’s direction suddenly became ten times more colorful, dynamic, and surprising once the Griffins moved to Springfield, and the way that the dialogue often lapsed into a lame defense of MacFarlane’s cartoon as a breathtakingly edgy bit of pure entertainment that the fainting-couch types can’t handle.”

Elsewhere, he notes how the episode seems to be baiting audiences: “[It gives] people who make Family Guy another opportunity to act persecuted, because acting persecuted is what the show has often done instead of creating consistently excellent work that’s built to last. Why be genuinely clever when you can just be cloddishly belligerent and refocus the discussion from the quality of the work to the question of whether artists have the ‘right’ to say something?”

At the heart of most debates about latter-day Family Guy is this argument. When fans seem to be receptive to the show’s seeming yen for “oh, they didn’t just say that!” reactions, what’s the point of the endless drubbing? Except for perhaps the need to be critical of the depraved places Family Guy sometimes goes in pursuit of those reactions, MacFarlane’s show knows exactly how to keep people talking about it. That talk is increasingly negative, granted, and the show’s nasty streak was especially stark when juxtaposed with the lovable denizens of Springfield, but it’s talk all the same.

And it translates. Sunday’s episode was Family Guy’s highest-rated season premiere in four years, drawing over 8.4 million viewers. Though the number seems a bit small, it’s not all that bad for two shows in their 13th and 26th seasons. In terms of the conversation, we’ve likely crossed the rubicon. There isn’t any “saving” Family Guy at this stage, and the point is moot. The show doesn’t need saving. It knows it’s fallen off, and people are still turning up every week to watch it anyway. If its fans don’t seem to be all that concerned, and its detractors have either given up or are still tuning in to hate-watch it, what’s stopping it from a few more years while it’s at it?