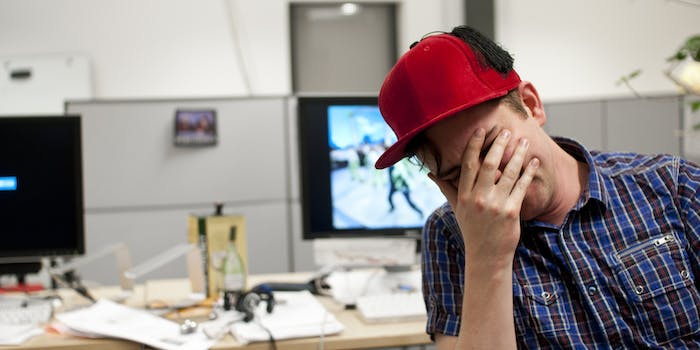 Rejection is inevitable, but this helpful guide will make dealing with it a little easier.

Tinder user and couch-based futures contract trader Tom isn’t the first guy whose explosively childish response to being rejected politely by a woman has gone viral—just the latest. Tom called the woman “fucking stupid,” insisted that she’s “not hot enough” to reject someone as high-earning as him, went through her Facebook photos and critiqued her appearance, and told her to “recognize superiority” and “know your place.”

Sure makes a girl want to come running back, doesn’t it?

The problem with Tom and guys like him isn’t (just) that they don’t know how to handle rejection but that they have disgustingly regressive and dehumanizing views about women. Changing their minds is probably beyond my ability.

But most people who have trouble dealing with rejection on dating sites aren’t like Tom; they don’t start bragging about how much money they’ve earned in the last few months or hurling invective. Rejection stinks and can make the best of us show sides of ourselves that aren’t exactly our best, but here’s how to make it suck a little less for everyone involved.

1. Once someone makes it clear that they’re not interested in talking to you, stop talking to them.

This is Consent 101, and many people still don’t understand it. When you continue to interact with someone who has said they don’t want to interact with you—and on dating sites, as with sex, silence should be taken as a “no”—you’re implying that your desires are more important than their boundaries. Even if you just want to know why they’re not interested, or make casual conversation about something else, it’s still wrong to keep pestering someone.

If you want to vent about how upset you are that the person rejected you, that’s totally understandable. But vent to someone else. Vent to a friend. If you don’t think you can vent to any of your friends, vent in a journal or on a secret Tumblr. If you have that kind of relationship, vent to your mom. (Moms are sometimes great for this.) Regardless, it is not the responsibility of the person who rejected you to make you feel better about having been rejected, even though they’re right there and typing that next message probably feels so easy and natural.

It always confuses me when I say I’m not interested and someone keeps trying to persuade me to be interested. Do these people really want a partner who’s only with them because they got tired of arguing about it? Sometimes when you’re really lonely and dejected about the whole dating thing, that can actually start to seem like a better deal than what you’ve got now. But it isn’t. Not only is coercion ethically wrong, but relationships based on it are not healthy, happy, or fulfilling. And they rarely last.

2. If you’re feeling really frustrated or pessimistic about online dating, take a break and do something that’s fun or fulfilling for you.

“Take a break” can mean take a few hours or days off from trying to message people, or take a break from online dating in general, for a few weeks or months or whatever it takes. This is good both for you and for the people you might message. I’ve gotten messages from men who were clearly very upset about their lack of success thus far, and they typically took their anger out on me, blaming me for the supposed sins of all of womankind. Needless to say, it’s very unkind to do this to people. I’m sorry that you haven’t been having any luck, but that’s not my fault.

But also, continuing to do something that’s making you upset will probably just make you more and more upset, and is unlikely to lead to success. Frustration and pessimism don’t typically draw people to you as a potential partner. Maybe that’s unfair and maybe people should try to look past that, but dating sites aren’t always great for letting people see each other in complex and nuanced ways.

3. If you’re wondering if it’s not them, but you, ask a trusted friend rather than the person who just rejected you.

This ties in with #1: don’t try to talk to people who don’t want to talk to you. Regardless, if you’re not having much success on dating sites, asking a particular person who wasn’t interested probably won’t yield much useful data. Maybe they’re not into facial hair. Maybe you look too much like their ex or their sister. Maybe your values don’t match in some domain that’s very important to them, and you’re not going to change your values just for the sake of some random OkCupid person (at least, I’d hope not). Maybe last time they dated a software developer or a research psychologist, that person was really boring and only wanted to talk about the latest developments in their field, and now they’re irrationally biased against software developers or research psychologists, and that sucks for you but there’s nothing to be done about it.

If you’re not getting anywhere with online dating and you’re wondering if there’s something you’re doing wrong, have some friends read your profile or the messages you’ve been sending out and offer feedback. For extra points, ask friends of different genders to get a greater potential variety of perspectives. Friends will be much kinder than the person who just rejected you. They may also be more honest.

4. Remember that dating is random and weird and you might be a great person but still unsuccessful for a while.

Maybe that’s not very encouraging, but until psychologists devise some sort of Unified Field Theory of Human Attraction that isn’t just pseudoscientific rubbish, there is no way to ensure that the type of person that you would want to date and who would also want to date you finds their way to your profile (or you find your way to theirs) and neither of you is too distracted or tired or demoralized that day to notice and do something about it.

A lot of money is made selling people advice and tips and tricks that attempt to circumvent this reality, because it’s so comforting to believe that there are ways to guarantee finding sex or love or whatever it is you’re looking for. But there aren’t. There’s just the basics–practice good hygiene, be yourself while also paying attention to which aspects of yourself you present first, respect consent, and treat people kindly, even after they’ve made it clear that they’re not interested. And none of these things can guarantee you anything, just make it more likely to happen.

But most people who try eventually find something they want. It might not be everything they want, especially since we grow up learning a lot of myths about relationships that aren’t very realistic. It might not last for your entire life, or the person might not be as attractive in a societally approved way as you’d hoped. And maybe you’ll be okay with relationships that don’t last forever, and maybe you’ll see beauty in someone who doesn’t match the expectations you used to have.

Photo via darkismus/Flickr (CC BY 2.0)