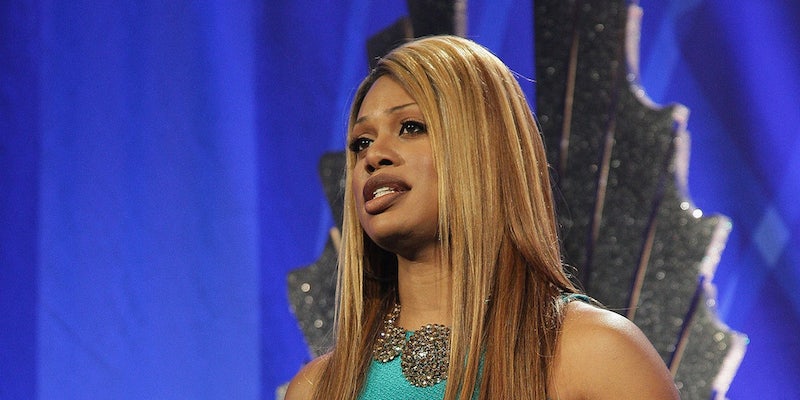 The Razzie nominations are out, and it’s time for everyone to gear up to “celebrate” the worst that Hollywood has to offer—including the staff at Rotten Tomatoes, everyone’s favorite movie review site. Rotten Tomatoes, like the slightly less freewheeling Metacritic, is an immensely useful review aggregator. And, as we learned this week when the staffers posted the Razzie noms, they’re also pretty transphobic. But we can’t exactly blame them, because they’re just riffing off the Razzie crew, who apparently still find it hilarious to use the “T-word” as an “affectionate” nickname for the Transformers franchise, illustrating how hostile Hollywood still is for transgender actresses.

While the official list mostly sticks to the names of films as advertised, Rotten Tomatoes retained the “T-word” branding that seems to have mysteriously vanished from obvious spots on the Razzies site—though if you know where to look, you can still find it. The quick scrub to pull the slur from the site overlooked archives and forums is a sign that the team behind the Razzies were more concerned with smoothing over ruffled feathers than actually changing their organizational culture.

It’s not about a word. It was never about the word. It’s about the sentiment behind the word.

Getting outraged about a goofy, fun-loving event using a transphobic slur might seem a little over the top, but it’s not about a word. It was never about the word.

It’s about the sentiment behind the word.

The organizers may think that the “T-word” is a hilarious pun, but it’s a bit peculiar to see a slur derived from someone’s gender identity being used as a joke. And that slur isn’t just a mean word. It has serious consequences. The “T-word” precedes violent attacks, and it can be used as part of sustained harassment and bullying campaigns against transgender people. The trans community is extremely vulnerable to harassment and assaults, with a disturbing number of rapes, homicides, and acts of domestic violence committed against transgender people annually. Sticks and stones hurt us, but so do the words that incite people to throw them in the first place.

Notably, trans women, especially trans women of color, are the most frequent targets of the “T-word.” In fact, the word is so closely associated with them that those who use it as a slur generally don’t mean it in reference to the transgender community in general, but to trans women specifically. It’s a reflection of a deep-seated fear and hatred that relies on stereotypes like the belief that transgender women are men in dresses, or have the intent of deceiving possible partners.

Being a trans woman can still be very dangerous. As Leelah Alcorn reminded us, the risk of mental illness and suicide is extremely high amongst trans youth, who are also more likely to experience homelessness and domestic violence. For trans adults, being transgender means an increased risk of employment, health, and housing discrimination, becoming trapped in abusive relationships, being sexually assaulted, and being physically abused.

For the gang over at the Razzies, there’s evidently something deeply funny in referring to the Transformers films as the “T-words,” and the Rotten Tomatoes staff doesn’t seem to have a problem with it either, though it could have just as easy chosen to actually type out the name of the film. That’s what the staffers at the Huffington Post did when they posted the shortlist, as the most important piece of information for readers is which films have been nominated.

Puns are great. We all love puns. We also love puns that are funny, and puns that punch up at the subject of the joke—maybe the Transformers movies really are bad, and maybe there’s a way to make that commentary without using a transphobic slur. Like, for example, the pun used in the announcement’s subtitles: “Transformers Four: Age of Ex-Stink-Tion.” Juvenile, yes. But perhaps an accurate assessment of the film’s quality.

But puns that use slurs are just puzzling. In addition to making the subjects wince, they condone the use of slurs—or teach people to use them in the first place. People who aren’t familiar with the transgender community might not understand the loaded history behind the “T-word” and why many consider it offensive, and some might appreciate being aware of that before they start slinging it around so they can make an informed choice about whether they want to use it. When an official communique from a trusted—for values of trusted, given the nature of the Razzies—source uses it, they might assume that it’s okay to use. And for transgender actresses, that’s another reminder that they’re not safe in Hollywood, or anywhere else.

For transgender actresses, it’s another reminder that they’re not safe in Hollywood, or anywhere else.

2014 was pitched to us as the “transgender tipping point” by no less than Time magazine, with its cover that famously featured Laverne Cox. Cox, Janet Mock, and many more have become familiar fixtures on television, in bookstores, and elsewhere, creating an explosion of transgender visibility that provides additional visibility for trans women of color. It’s an amazing step for the transgender community to see more trans actresses, models, authors, and public figures getting their due.

The growing prominence of trans women in pop culture suggests hope for the future, as we will hopefully see more trans actresses on stage and screen, in a variety of roles. At some point, we may reach the true tipping point of casting trans actors in roles that don’t necessarily center around their gender, as characters who are simply women, with other characteristics, flaws, and interests. Sometimes the most striking sign of acceptance is to be invisible, but we’re a long way from there, especially when the “T-word” is still ubiquitous in pop culture and when trans women can’t catch a break in the industry.

It hasn’t been a perfect year, but it’s a year that could indeed prove to be a turning point for the trans community. This makes the use of an anti-trans slur all the more repugnant, and a reminder that for all the progress trans women have made in Hollywood, serious barriers still remain. While the Razzies may not be a serious industry group, they do represent Hollywood, and the decision to use a slur in their professional communications says a great deal about what they think of the transgender community.

Should a trans actress ever be up for a Razzie, one wonders how the organization will handle it. Will she be judged on a terrible role in a bad movie, or on the basis of her gender identity? The casual use of the “T-word” suggests the latter, which is disappointing. The Razzies might have meant to shine a light on how terrible the Transformers are, but it’s just making them look ones with the problem.