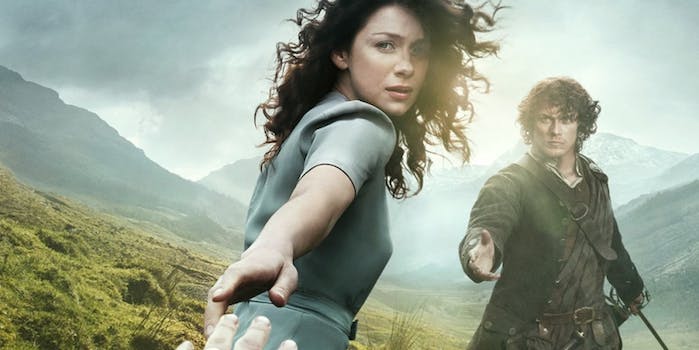 Can we talk about the rape scenes in ‘Outlander’ yet?

Outlander must have traveled back in time for a rape scene this regressive.

Outlander is a television series based on the beloved epic novels by Diana Gabaldon. It was advertised as a sexy, funny, supernatural-but-relatively-accurate historical romance featuring a witty heroine, Claire, at its center. It has been billed as “feminism’s answer” to Fifty Shades of Grey and Game of Thrones. That is a bizarrely tall order, but the show managed to make good on every promise—right up until the mid-season finale got seriously rapey. The episode, “Both Sides Now,” had two back-to-back scenes of attempted rape, showing us “both sides” of what happens when a hit TV show tries to portray sexual violence (hint: one of those sides is terrible).

The British-American show is an original production for the Starz channel and, like Gabaldon’s books, revolves around a World War II nurse named Claire who falls back in time to the 18th century, where she finds drama, political intrigue, and romance on the Scottish Highlands. AV Club writer Sonia Saraiya described the show as a “letter-perfect historical fantasy” that does for 1743 Scotland what Downton Abbey does for 1912 England.

I felt a burgeoning sense of trust in Outlander as I sat down to watch the mid-season finale, which aired on September 27. Earlier in the season, a depiction of two attempted rapes had been handled well: There was no nudity and the scene demonstrated a great deal about the central characters with few words; it didn’t feel graphic or salacious. The sexual humiliation felt real and awful, not titillating, and it demonstrated the complexities of exchanges of power, unapologetically refusing to simplify the situations. If these seem like obvious things to do with a script, I will direct your attention to the sea of failed attempts to depict rape on screen (Downton Abbey) without exploiting female characters or using a woman’s rape as nothing but a plot point to further the understanding of male characters.

In Outlander’s mid-season finale, the episode’s first scene of attempted rape takes place when Highlander Jamie and Claire are having sex in a meadow. The brief love scene primarily focuses on the pleasure on Claire’s face, and it’s her face that stays in focus as they are interrupted at gunpoint. It’s quite a few beats before the camera pans away to show the assailants: Two British deserters. Claire looks terrified and vulnerable, but remains covered, holding her shirt together. The assault itself is brief and stark, shows none of Claire’s body (something the show has happily done in scenes of mutual pleasure), and ends with Claire and Jaime both knifing the assailants to death.

Later in the episode, we return to the same scene. The action again stays focused on Claire. She watches as Jamie falls apart and she holds herself together, telling him, “It’s alright. We’re alright,” before looking down at her freezing, shaking hands and realizing, “It’s shock. I’m going into shock.” While Claire and the emotions playing out across her face are front and center, from the periphery, there are important developments: Jamie’s helplessness, her realization that he cannot save or protect her, and the knowledge that she must save herself. These realizations, and not the assault itself, will ultimately lead to a hugely important moment for Claire that drives the plot forward—her attempt to return to her own time, the twentieth century.

Unfortunately, where that moment drives the plot is right off the rails into the second attempted rape scene. Rather than a sensitive portrayal or the well-executed interplay of violence, power, and trauma that we saw in the first scene in this episode, this was an offensive failure.

In this second scene, a British soldier, the truly villainous Captain “Black Jack” Randall, captures Claire and ties her up in his fort. He holds a knife to her nipple and is about to rape her when the window bursts open—Jaime jumps in and snarls, “I’ll thank ye to take your hands off my wife.”

Throughout the scene, the camera pans back and forth: Claire’s face, a soldier stationed outside the door, Claire’s face, Randall carrying a rope, Randall tying up Claire’s hands, words between Randall and the soldier, are all interposed in seconds, disrupting the point of view that has made this show so different and so successful in bringing us into Claire’s experience. The scene is shot wider, making both Randall’s smirk and Claire’s helplessness equally important to the viewer. Randall ties her up, cuts her dress with a knife, exposes her breasts, drags her by the hair, bends her over a desk and yanks her skirt up to reveal her naked from the waist down. He grabs her by the shoulder, turning her out so that her exposed breast is facing the camera explicitly, and jams the knife against her nipple.

After Jaime slams open the window, the camera pans from his face to Randall’s, then back again to his. The fight is left between two men. The last image of Claire for this season is also the final image of the scene: Her head is canted out to Jaime, looking helpless. The first scene felt like an intense, immersive experience; the second felt like a cheap Harlequin romance that paints Claire as a helpless damsel. Even if the scene was filmed “as written,” the book tells the story from Claire’s perspective. Here, that is visually disrupted, robbing Claire of any agency and even of the experience itself, making it about the two male characters’ feelings and interplay.

It turns out those two scenes feel like they were shot by two different people because they were. The episode’s primary director, Anna Foerster, was responsible for only the first. “Her reunion with Black Jack I unfortunately didn’t get to film because they had to shoot it before I moved over there…something to do with the set,” Foerster told The Hollywood Reporter. Unfortunately is right. Richard Clark directed the final sequence. At least I know where to point my helpless rage: At the director that had no idea what he was doing and filmed a pivotal sexual assault scene anyway, and at the producers who thought so little of letting him do it.

It is somewhat disappointing, then, that weeks after shaping my theory that Outlander has reversed the damsel/hero dichotomy, the episode ends with an all too familiar shot: Claire, helpless, stripped, trapped by Captain Jack Randall, and Jamie swooping in at the last minute with all the gusto of a noble knight to save the day…I think it’s somewhat cruel that the last image we’re left with is one that’s so dark and disturbing, one that positions our hero as a victim. But it also speaks to the fact that Outlander isn’t just romance novel escapism. The series oscillates tonally from one scene to the next: sexy, fun, feminine fantasy in one moment, only to be followed by terrifying darkness. ‘Both Sides Now’ epitomizes that balance for the series.

But two extremes don’t come out in the wash as balance, and that last image of our heroine undermines the audience’s trust and of the best this show has to offer.

The reviews overwhelmingly ignore the problematic finale scene in favor of, “Dat cliffhanger tho,” and many reviewers emphasized the terribly long wait until the show returns in April. Personally, I’m neither excited nor prepared for this show to come back. The source material has still worse things in store for the characters, including some truly horrible sexual abuse, and in the wrong hands, this will quickly become unwatchable. I’ve stuck with them so far out of hope in that burgeoning trust, but that trust has been violated, and won’t be easy to win back.

Kaitlyn Soligan is a writer from Boston living in Louisville, KY. She writes about that at www.ivehadworseideas.com and tweets @ksoligan.

This post originally appeared on Bitch Media, and was reprinted with permission.