We need to build platforms that better match political action to the structure of governance.

When the Internet first gained traction with the public, part of its appeal was in its fundamental promise of an enhanced democracy. With the ability to broadcast to the world just a few keystrokes away, Web-based platforms were supposed to foster more effective involvement in our governance.

More than 20 years after the first commercial Internet service providers, though, the potential of digital democracy has largely dwindled.

That decline is due, in no small part, to the pride of place taken by surveillance in our government’s digital efforts, and through it, the digital marketing strategies implied by the term Big Data. Over the last two decades—roughly the span since email first gained widespread commercial use—consumers have increasingly traded bits of information about themselves in exchange for the advantages of digital technology, often without even acknowledging that the transaction took the form of a quid pro quo. 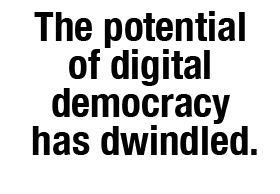 Each data point collected by a digital service may be relatively harmless on its own. When used in combination, however, they can suggest more about us than we intended to reveal. As we integrated ourselves into the digital landscape, the volume and variety of information we provided increased until it became possible to build sophisticated profiles about our activity on phone and Internet networks. The companies who managed all that data soon realized that, by crunching the numbers in innovative ways, they could extrapolate on the basis of those profiles—drawing conclusions about the lives we lead offline. In that regard, Big Data refers to the collection of that data into sets so complex that specialization is required to make them useful, as when a digital retailer contracts an outside agency to help sort through the mountains of data they’ve collected about their customers.

The promise of Big Data has always been the idea that those conclusions could lend themselves to advanced marketing strategies that would reap big profits for the companies that owned the profiles, but it turns out that they lend themselves just as readily to spycraft.

It is a little remarked upon facet of the Edward Snowden leaks that the same circumstances which led to the emergence of Big Data are precisely those that make possible the powers exercised by the National Security Agency’s PRISM program. That’s why U.S. telecoms like AT&T, as well as Internet giants like Google and Facebook, have been the frequent targets of Foreign Intelligence Surveillance Act (FISA) court orders for data: they’re already in the business of collecting the sort of data the NSA hopes to parse for intel.

If there’s any doubt about the appeal of those methods, simply reflect on how much energy the agency has put into adapting Big Data into a massive surveillance apparatus. As recently as February of 2012, according to a New York Times report on the latest batch of leaks, the agency was issuing strategy papers outlining plans to expand its powers on the digital frontier. The document outlining the future of Signals Intelligence (or “SIGINT”) strategy noted the need to “keep sight of the dynamic and increasingly market driven forces that continue to shape the SIGINT battle space” (emphasis added). However alarmed we may be at the changing nature of the surveillance conducted by government agencies, we should not be terribly surprised by it, since the NSA is following the lead of a private sector we’ve encouraged by our patronage.

That may also explain why, despite the opacity of the claim most frequently invoked to justify it, PRISM looks to be the government’s most functional digital initiative to date—even after recent updates to healthcare.gov.

At the same time, we should remind ourselves that they couldn’t have done it without our willingness to fill in the blanks. Big Data would have been a science-fiction conceit had we not already busied ourselves with providing more and more data in exchange for digital services. We embraced cellphones and social media; we entrusted more and more of our usual activities to wired devices and the cloud. In our defense, we weren’t always aware of how our interactions were helping to terraform the information landscape, and opt-out has frequently been the exception rather than the rule. (Europe is far ahead of the U.S. on the latter front.)

In recent years, though, our growing awareness of social media’s role in fostering Big Data has made us complicit.

That, in turn, has changed the nature of our relationship to the institutions around us. In principle, our society has a heavy investment in the voluntary speech of its citizens. It wasn’t always so—even some in the Constitutional Convention fought to preserve the wisdom of a nouveau aristocracy against what they took to be the foolishness of the masses. By the 20th century, though, the belief that Americans ought to speak up for their own interests and expect a fair hearing had taken pride of place among our national values, setting the stage for the long civil rights battles that have undoubtedly made the country more just and equitable. 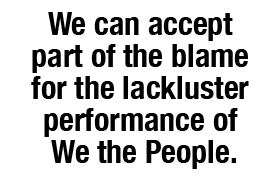 The most basic expression of that principle is enshrined in the vote—a voluntary act, in principle available to every adult citizen, that allows each of us to declare our interest in the government—but the U.S. is not a direct democracy. Most of the substantive decision-making is done by officials charged with representing our interests. We can vote them out of office if they botch the job, but during their term our options for ensuring proper representation are rather limited.

Part of the promise of digital technology, then, was that it might allow us to communicate our interests more directly to each of the branches of our government, thus ensuring a more direct form of representation than has historically been the case. The most visible emblem of that promise is We the People, the petitioning site trumpeted by President Obama as a new line of direct communication between the government and its constituents.

So far, We the People has proven effective at providing the White House with opportunities for displaying its geek credentials, but has resulted in very little demonstrative change. A year after it launched, and well before the administration raised the quota of needed signatures from 25,000 to 100,000, official responses slowed to a crawl.

As with our role in fostering Big Data, we citizens can accept part of the blame for the lackluster performance of We the People. The Internet being the snarky place that it is, the site was quickly flooded with petitions of varying degrees of seriousness and sanity, aimed at forcing a response from a bewildered White House. Still, even a widespread seriousness of purpose may not have salvaged its lofty aspirations.

The critical problem lay with the muddled goals of the site. The range of interactions afforded by We the People are much clearer than on Healthcare.gov, for instance. What’s unclear is what those interactions are meant to achieve. The site gives citizens a relatively easy means of delivering a message to the seat of executive power, but there are no real guidelines on what happens next. The White House has not obligated itself to act on successful petitions. All it promises is an official response, and even that may not be especially forthcoming. Even if a petition were to influence policy, the line connecting the two would be so disparate as to pass notice. Thus, petitioners who look to We the People as an avenue toward tangible change are almost bound to be disappointed—and if not to produce democratic change, then what is it there to do?

It doesn’t have to be that way. Ironically, though, attempts to pattern government strategies after data-driven business models have undercut the promise of a democracy empowered by digital media. As a result, our government’s most successful digital initiative is not the one named after the opening clause of the Constitution, but rather the one whose name was, until recently, classified; not the populist site for declaring our own interests, but the secretive dragnet combing metadata for hints about our allegiances. In the digital domain, at least, our relationship to the government has come to be less about voluntary declarations and more about the unintentional signals we provide for SIGINT.

To tip that balance back toward deliberative democracy, we need to build platforms that better match political action to the structure of governance. Americans are continually faced with a deficit of information about the best way to ensure that our interests receive a fair hearing, and information is one domain in which digital technology ought to provide readily accessible solutions. It is, in effect, a discoverability problem, but we long ago left discoverability to Big Data trailblazers like Google.

To solve that problem at the level of public service, we need to recognize the special concerns that arise when a citizen’s political involvement is at stake. A site for petitioning the president may be cathartic, but our federal system was designed to give citizens more direct representation at the legislative level. A platform that made it easier to connect users to the congressperson or local official best positioned to handle their particular concern would be exponentially more useful. Instead, we have individual homepages dedicated to the thousands of officials, agencies, and departments that represent the people, spread across the .gov domain with little to help the user navigate between them. Having successfully replicated the bureaucracy of government on the Web, we should now be leveraging the sorting power of digital technology to put that bureaucracy at the service of the people, rather than in their way.

For those still concerned about the NSA’s broad surveillance power, limiting the purview of SIGINT will be trickier. It will, at the very least, mean updating the legal framework to provide for digital data the same protections we build around other mediums. Ensuring that Congress understands that we consider that an interest vital to democracy would be much easier if we had a platform that connected each citizen to his or her local representatives.

In the meantime, you’re left doing your own footwork, and figuring out for yourself who best represents your interests. Maybe you can petition the White House directly and hope they pay attention.