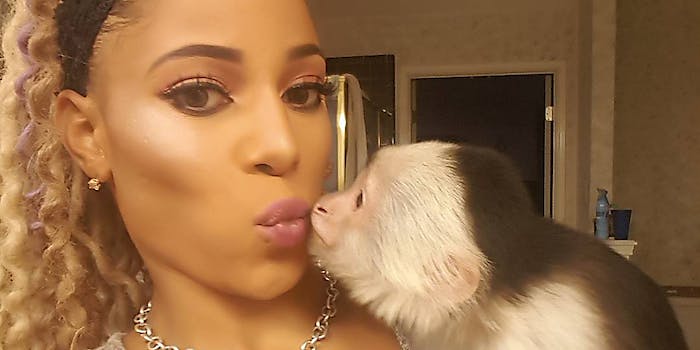 A tweet claiming a monkey belonging to the partner of a University of Texas football coach “attacked and seriously hurt a young Trick-or-Treater” went viral.

Tom Campbell, who has no known connection to Texas football, wrote on Nov. 1: “I’m hearing a report from a credible source that Texas Longhorns Special Teams Coach Jeff Banks’ monkey allegedly attacked and seriously hurt a young Trick-or-Treater last night on Halloween. The monkey’s jaws apparently had to be pried off the small child.”

Campbell posted a screenshot of a post from the monkey’s reported owner, Danielle (or Dani) Thomas, the partner of Texas assistant head coach/special teams coordinator Jeff Banks, to back up his point. Thomas, in the post, seemingly invited her neighbors to a “haunted house/maze” at her house. “I’m welcoming all kids Sunday,” the post read.

Information about Thomas and her monkey, Gia, came out amid the sticky accusation. In one social media post, she’s seen using the monkey at work.

Once a notable stripper going by the name “Pole Assassin,” Thomas reportedly initially pushed back on the accusation via her now-deleted Twitter account.

“People lie so much it’s ridiculous! Stop believing everything u hear! And more of what u see. SMH!” she reportedly wrote in one deleted tweet.

She later backtracked, and in a follow-up tweet seemingly confirmed that some sort of incident did occur.

“No one was viciously [attacked]. This is a lie, a whole lie! She was not a part of any haunted house; the kid did not have permission to be on the other side of my property,” she reportedly wrote.

Then, Thomas tweeted that she did have “a haunted house (with) one side gated off. He has no permission to go past the gate. I had no idea he went in my backyard. Neither did I know anything about a bite! Until a doctor of the neighborhood told me [they treated] a small bite. No parent has contacted me about it.”

“A 11 /12 year old child should know better than to enter someone yard without permission and old enough to also follow the rules . The rules were when u get to the gate turn around and come back out for candy every other parent and child did so !” she wrote.

In an additional tweet, she said the monkey belongs to her alone and absolved her partner of any wrongdoing, saying the situation “has nothing to do with him!”

The PFT Commenter Twitter account then posted a video of Thomas describing what went down. She says the child in question did venture into areas beyond what was explicitly designated for the haunted house “without permission.”

Thomas says the monkey was behind a gate, inside a cage. The video shows that a sign for “emotional support” animals is posted on the gate.

“And watch this: I don’t even play when it comes to my animals. And I know all the legal rules on them. ‘Do not enter, emotional support animal, no touching.’ How could (the monkey) viciously bite someone if they don’t stick their hand in there where it don’t belong?” she says.

“This is her home and her home only. It’s already clear as day on the gate. Don’t touch; no one’s allowed back here without my permission,” she continues.

People had a lot to say about the situation on Twitter.

Neither the university nor Banks, who is linked to the head coaching headhunt at Washington State, have made a statement on this wild story. The incident likely won’t change Banks’ position as one of the top assistants in America. He is reportedly one of the nation’s best recruiters.

The Daily Dot has reached out to Dani Thomas, media contacts for University of Texas football, and the Austin Police Department for comment.