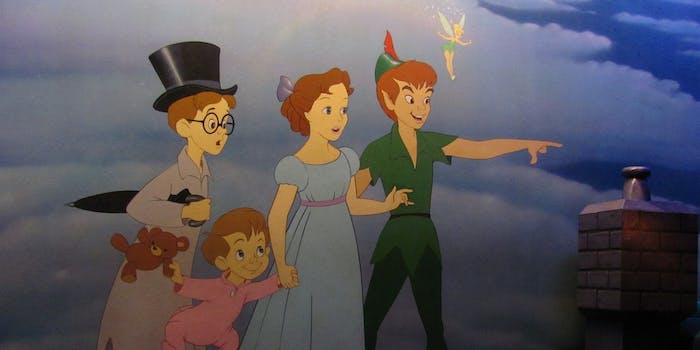 Is Peter Pan destined to be a campy disaster or totally awesome? How about both?

Second star to the right, and straight to embarrassment everybody! Because Marnie Michaels is playing Peter Pan.

More specifically, Allison Williams will be playing Peter Pan, as NBC announced this week. Williams joins Christopher Walken, who is set to portray Captain Hook in a one night live revival of the classic 1954 musical, which will be broadcast on December 4th.

As tempting as it is to imagine a comedic connection between Williams’ version of Peter Pan and the character she plays on Girls, the fact is that the decision to cast her in the part makes at least some sense. Williams is a talented singer and actress—one who, like many of her Girls cohorts, has been unfortunately branded with “nepotism” (her father is NBC Nightly News anchor and all around awesome dude Brian Williams). This is also good news considering how hard it has supposedly been for the cast of Girls to break out from the roles they play on the show.

But a lot of questions about this version of Peter Pan remain. NBC had tremendous success last year with their live version of The Sound of Music, but Sound of Music has remained a cultural staple in a way Peter Pan has not. While the story of Peter Pan continues to rear its head every few years, most peoples’ point of reference for it is probably the Disney version from 1953. That’s not to say the musical wasn’t quite famous; many surely know it from the 1960 live recording, with original cast member Mary Martin. But The Sound of Music, on the other hand, in addition to being performed across the country on a regular basis, spawned the famous film adaptation, well-known as an Oscar-winning favorite.

Essentially, both musicals are old, but for various reasons, Peter Pan just comes off as more antiquated.

It doesn’t help that some are not so sure about Williams. While defending her casting over at The Daily Beast, Kevin Fallon noted a decidedly sour reaction on Twitter. Fallon theorizes that this stems from the dislike many appear to have for Marnie, the character Williams plays on Girls (a feeling he himself has explored), and the possibility that some see Williams as a “Theater Kid”—an always “on” type of actor/actress, like Anne Hathaway. (Fallon claims to have coined the term “Hathahate,” which he has since said he regrets.)

But according to Fallon, Williams’ theatrical persona, as he sees it, makes her fit for the role. He elaborates, “Here’s some good news for Williams, and for all of those who fear that said ‘Theater Kid’-ness makes her a poor choice for Peter Pan. As it turns out, Peter Pan is theater! It is musical theater! Hey, I wonder if the fact that Williams seems like she lives each day as if she’s in a Broadway show would make her a good fit for performing a televised version of an actual Broadway show?”

Williams as “Theater Kid” has been played with on Girls, too. Elijah comments about Marnie in a season 3 episode, “Her performance style is both too stiff and too hopeful. She’s like, ‘Papa, am I a pretty girl, mama?'”

This brings us to the next important question about NBC’s Peter Pan revival, which is, will anyone take it seriously? Meredith Woerner at io9, for one, doesn’t think it matters. “We are overjoyed that NBC has decided to go the traditional gender-swapped Peter Pan casting route, because camp,” Woerner declares. “Perhaps NBC learned after their Sound of Music premiere was that the only way to get through another live debut is to go full-on campy.”

As Woerner’s comments get at, there is always some camp inherent in musicals, (Sound of Music absolutely included.) But the problem with reviving Peter Pan is that a lot of the ensuing campiness could come from the gender-bending casting, which also might be the one element audiences will have to take seriously for it to succeed. In that sense, producing Peter Pan in 2014 is a minefield.

Historically, theater and gender-swapping go hand in hand. Shakespeare’s plays have become famous for it, and occasionally the trope is still used in interesting ways, such as a recent all female revival of Julius Caesar. But in modern America, gender-swapping has most often been kept alive through fandom. You don’t have to look far on Tumblr or elsewhere on the Internet to find plenty of tributes and artwork dedicated to it.

You could even argue that gender-swapping is having a bit of a comeback. Marvel’s announcement of their plans to introduce a female Thor could be looked at as proof of that. And the potential of Oculus Rift literally introduces a whole new level of possibilities for gender-swapping.

But in a socially aware society, gender-swapping can introduce a host of unwanted controversy, too. Plans for a sequel to Mrs. Doubtfire illustrate the reality that laughing at someone for inverting gender norms is no longer as lighthearted a matter as it once seemed. And as the widely-panned series of a few years ago Work It demonstrates, doing a poor man’sSome Like It Hot isn’t only unfunny, it’s offensive.

That said, there are reasons to bring back the gender swap, too, especially for women. Back in 2005, The Guardian’s David Lister argued for more gender-swapping on stage: “Yes, there has been the occasional all-male or all-female cast, at Shakespeare’s Globe and now at the Bristol Old Vic, but that is a different exercise from having major male roles in otherwise conventionally cast productions played by a leading actress.”

What Lister is getting at is what makes something like the aforementioned 2013 revival of Julius Caesar so powerful. In reviewing it, the New York Times’ Alexis Soloski observes, “Whether or not this ‘Caesar’ inspires audiences, it has certainly inspired the actresses involved. Ms. Jumbo, who said that she had coveted her male classmates’ roles during drama school, now wonders what other parts she might take on: ‘Playing Mark Antony has suddenly made me think: “Hold on a minute. I could play Hamlet!”’”

But the empowerment of gender-swapping needn’t be relegated only to theater. The notion that a woman can play a man’s role remains revelatory in any medium, and shouldn’t be ignored. So yes, Allison Williams and the new Peter Pan are likely to be incredibly campy. But despite that, there’s no reason the whole thing can’t be awesome, too.