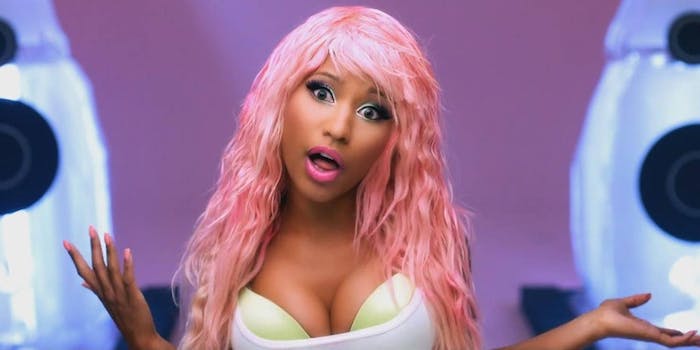 When women have intellectual debates, they're not having a cat fight.

“Pretty white girls always are brilliant, even when they ain’t.”

Cookie Lyon had a point while chatting with one of her sons on Empire—about how white women are typically presumed more desirable, intelligent, and creative than black women. It’s something black women like Nicki Minaj know all too well, especially as it relates to the music industry.

After being notably snubbed in the major categories for the MTV Video Music Award nominations, Minaj launched into a critique about how awards shows and industry insiders often devalue the creative achievements of black women. Generally, as Minaj noted, anti-black bias and institutional racism gives way to women of color being snubbed in favor of whiter (and more slimmer) prospects.

That caught the attention of Taylor Swift, who didn’t hesitate to express disappointment that Minaj was supposedly pitting women against each other and, thus, behaving badly as a feminist. Swift, who reminded Minaj that she has supported the rapper in the past, somehow took the tweets as a direct attack, although the issue at hand is not one that’s just about her.

The media‘s tendency to reduce serious arguments between women to petty quarrels is problematic, because it casts aside women like Minaj as “haters,” rather than as creative minds who are also cultural influencers.

Just prior to the exchange between Minaj and Swift, Hunger Games star Amandla Stenberg—a black teenage girl—directly raised concern that Kylie Jenner—a white teenage girl—appropriated black culture and hairstyles yet again. Rather than focusing on the real issue at hand, Bravo host and executive Andy Cohen gave Stenberg his “jackhole of the day” award, deemed the exchange a catfight, and punched down to insult a black teenager who intelligently discussed racial issues.

One week later, and we’re here yet again.

What Minaj actually did was quite simple. She called out the music industry because black people, namely women, don’t get the same recognition that white people do in the media. Instead of directly calling out any particular artist, Minaj commented on the racial undertones of the VMA nominations. For those claiming her points are ludicrous or that she’s just “pulling the race card,” she’s not. Her points are easily validated by looking at the white-washed history of the music industry and award shows, including the Oscars and even the Grammys.

Although Minaj’s “Anaconda” video broke a Vevo record for the most views in 24 hours, it wasn’t nominated for the coveted Video Of The Year award, instead receiving a nod for Best Hip-Hop Video. As typically happens at awards shows, artists of color get shelved into rap, hip-hop, or R&B categories but get little-to-no recognition within the major categories. Even though many music fans claim the Beatles had the largest influence on pop, studies show hip-hop triggered the largest evolution in modern music. But the media, and the music industry at large, doesn’t acknowledge this reality.

What makes the neglect of these serious issues worse is that when a successful black woman voices her concerns on these issues, her claims are quickly dismissed. In this instance, not only was the whole Twitter fiasco reduced to a petty argument, but Minaj got pegged as an “angry black woman.”

For example, Entertainment Weekly tweeted a photo that juxtaposed a poised, elegant-looking Swift against an off-guard, and perhaps goofy, photo of Minaj taken during her era of pink wigs. While the tweet was eventually deleted, and the publication issued an apology, the action further trivialized Minaj’s legitimate claims—while proving that we hail Swift’s white, innocent womanhood and will protect it at a black woman’s expense.

@mandy_ski @EW This is their second draft. Check out the first: pic.twitter.com/1tSrd91FLi

@EW It was a REFLEXIVE choice. If you had all the time in the world, you would have still CHOSEN to use that same set of photos.

The tweets between the two women, and the public’s reaction, is a perfect example of how the media doesn’t understand racism nor the intersectionality of race and gender, something Nicki Minaj tried to explain in her tweets. As a black, female artist, she faces more oppressive barriers than a black, male artist and a white, female artist. What Swift failed to comprehend is that her being white means she’ll never know what it truly means to face oppression because of the color of her skin.

In additions to Minaj’s claims of racism in showbiz, feminists like Swift need to go beyond solely focusing on issues of gender oppression, and expand their focus to include other forms of oppression. For those who don’t know, these feminists embody a term that the Internet calls “white feminism.” Based on her current approach and evident knowledge about gender equality, Swift’s politics seem to align with this train of thought.

As it’s derided on the Internet, white feminism isn’t intersectional, and usually isn’t inclusive. Instead, it ignores, downplays, or silences issues related to race, sexuality, class, and other identities, and focuses solely on gender-based oppression.

Behold the perfect embodiment of #solidarityisforwhitewomen in one single tweet https://t.co/nieELcBVWl

As Huffington Post culture writer Zeba Blay notes, “Calling out white feminism isn’t about demonizing all white feminists, or erasing the history of feminism and the role white women (and all women) have played in it. It isn’t about attacking women like Taylor Swift, who in recent years has proudly taken on the feminist mantle.” Blay continues, “White feminism turns Swift into the victim and Nicki Minaj into the bully.”

The media’s tendency to reduce serious arguments between women to petty quarrels is problematic, because it casts aside women like Minaj as “haters,” rather than as creative minds who are also cultural influencers.

What Swift, the media, and her supporters don’t seem to understand is how white privilege helps Swift further her power and influence in the music industry. Swift has talent in her own right, and criticizing her approach to feminism doesn’t take anything away from her artistry.

Yet Minaj, an esteemed black artist who created one of 2014’s biggest hit music videos, comes up short because of bias in the system. By calling out the industry’s double standards, Minaj wasn’t pitting women against each other, nor was she inciting an argument with Swift. Instead, she used her snub as a teachable moment, highlighting how awards shows like the VMAs tend to reward white mediocrity, rather than creative excellence and achievement.

The exchange between Swift and Minaj could’ve been framed as an intellectual conversation between industry peers about how racism and sexism intersect. But it was simply regarded as a “feud” for cheap clicks and retweets. That very reaction proves Minaj’s point—black female artists don’t get the respect they deserve, and white women are almost always presumed better by comparison.