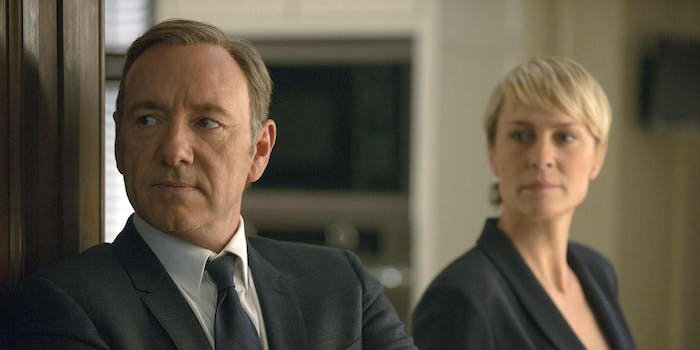 Sexuality is only ambiguous if you’re taught 'bisexuality' is a bad word.

Last month, everybody’s favorite binge-watching service, Netflix, released a new season of House of Cards. However, even though we are now on the third season, everyone is still hung up on what happened last year.

Showrunner Beau Willimon claimed in a recent interview with the Huffington Post that Frank doesn’t really put “much stock in labels” like bisexual or pansexual, and Willimon is reluctant to “pin him down.” Despite the fact that Frank clearly enjoys sex with men and women, Willimon doesn’t deem this aspect of his character’s identity worthy of exploring or naming. Instead, Willimon evades the “B-word” altogether. When asked about Frank’s relationship with a different man, he continues to skirt the issue: “It’s an emotional connection. Not necessarily a sexual one.”

Though this conversation might appear to be progressive on the surface, it perpetuates the silence surrounding men’s bisexual representation. You say ambiguous, I say bi-erasure.

You say ambiguous, I say bi-erasure.

The nutshell definition of bi-erasure is the dismissal of bisexual identities and devaluing the importance of bisexual representation in culture and society. It’s bi-erasure when Frank is meticulous in all aspects of his life but his sexuality is no big deal. It’s bi-erasure when Hannibal’s creator intentionally puts queer subtext in the series and then laughs off the assertions that Hannibal isn’t straight or deserves a label.

Bi-erasure is the reason why Constantine has gotten so much attention, which drew criticism for its erasure of the titular character’s bisexuality and subsequent queerbaiting. Over and over again, we are reminded that bisexual men are everywhere except on our TVs.

Of course, I believe that individual people should have the right to describe their gender and sexuality the way they want; everyone is entitled to their own identity. But the fact that people regularly claim bisexuality doesn’t exist and that bisexual people need scientific studies to justify their own existence is a problem. Neither heterosexual nor homosexual people are under the same type of pressure to “choose a side” or just be “fluid” and shut up about it.

This is not to downplay systemic homophobia, but it’s important to acknowledge that so many who represent the L and G in LGBT behave in ways that are biphobic and damaging. Bisexual people have the unique experience of having to deal with bi-erasure when people assume we are “straight passing,” homophobia from a heteronormative society, and biphobia from the people who are supposed to represent a safe community for us. The invisibility of bisexuality in the media further enables bi-erasure in the real world.

The invisibility of bisexuality in the media further enables bi-erasure in the real world.

But bi-erasure goes beyond just denying the audience full and realistic characters. Bi-erasure and biphobia create real social consequences and health risks for men. A study released last year reveals that men are severely stigmatized and feel unsafe in ways that affect their health. They are perceived to be “disease vectors” carrying STIs, are more likely to drop out of school, more likely to struggle with substance abuse, and experience unsafe sexual behavior and coercion, among other issues. Mental health is also a major concern, with bisexual men experiencing higher rates of depression, anxiety, and self-harming behaviors than gay men.

While there’s no one easy way to fix it, allowing bisexual characters to exist on TV and showing bisexual viewers that they’re not alone is a start. It’s safe to say that Frank is most likely either bisexual or pansexual, and I’m claiming Frank for the team. Sexuality is only ambiguous if you’re taught “bisexuality” is a bad word.