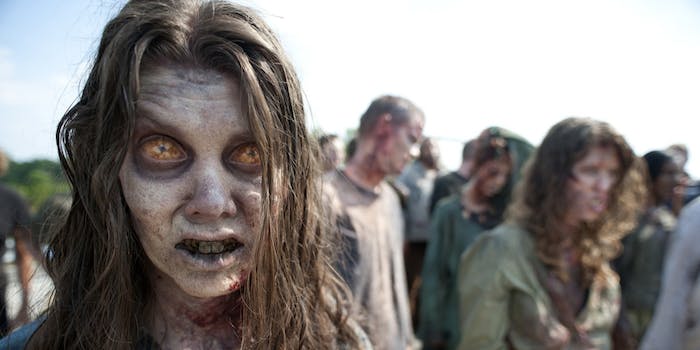 Is Netflix turning us all into depressed, lonely zombies?

Step aside, sexting and Twitter, there’s a new public health menace out there eager to gobble up our most precious human resource—millennials—into an everlasting pit of despair and angst, sending them straight on the path to an early death. I’m, of course, talking about Netflix marathons.

So go the media headlines inspired by a recent press release from researchers at University of Texas at Austin. The team announced the results of an as of yet unpublished paper that found that the more lonely and depressed people are, the more likely they are to partake in binge-watching television for hours on end. But much like a Law & Order episode inspired by true events, it turns out that plenty of these media outlets have bungled the actual conclusions of the paper, and even for those who haven’t, there’s been little examination as to just how seriously we should take the study’s results. Cue surprised look.

Contrary to what Entertainment Weekly, Hypable, and the Huffington Post say, no, the study does not prove that binge-watching television, whether on subscription apps like Netflix and Hulu or through DVD box sets, makes you sad and lonely. Nor does it conclude that if you engage in binge-watching (the definition of which I’ll pick a bone with later), you are, thus, a burlap sack of melancholy.

What the paper, “A Bad Habit For Your Health? An Exploration Of Psychological Factors For Binge-Watching Behavior,” does show, by polling 319 people ages 18-29, is a correlation between higher rates of loneliness and depression among binge-watchers as compared to non-bingers. It also found that higher amounts of self-regulation deficiency (poor self-control) predicted viewing more episodes of a TV program per binge session.

Correlation does not necessarily equal causation.

As the familiar canard goes, though, correlation does not necessarily equal causation. And even if it did, the connection would be people binge-watching to cope with their depression and loneliness, not binge-watching somehow causing mental illness. The authors note, “Those who feel negative emotions such as loneliness and depression may binge watch TV series to stay away from their negative feelings.” In other words, we don’t get hungry because we sat down to have some dinner—we wanted chow because we’re hungry (or bored). And just because you love watching a marathon of Bryan Cranston and Aaron Paul outsmarting Gus, it doesn’t mean you’re depressed and lonely. It means you love great television.

For the sake of fairness, most of this confusion is only reflected in the dreaded frenemy of journalists everywhere: the headline, which is often written by a separate editor and without input from the reporter. The articles themselves tend to accurately describe the study, or at least seem to have read the press release.

But considering the well-known track record of headlines in misinterpreting scientific findings and given how few people actually read past the headline, it’s always worth taking media outlets to task for irresponsible and lazy editing. After all, there are very real consequences of poor science reporting. Just ask the health organizations trying to stop the spat of measles outbreaks across the country, due to the scourge of the Internet anti-vaccination movement. The trend was fueled in part by the uncritical media coverage of Andrew Wakefield’s MMR study in the late ’90s, which has since been discredited.

There are very real consequences of poor science reporting.

Not that this study is a fraud in the making. Far from it. But even of those media outlets who correctly summarized the study, I’m left wondering how many reporters read the paper itself and if so, why they didn’t discuss some substantial caveats of the study’s findings.

For example, the definition of “binge-watching” used by the team is rather loose. They found that 75 percent of those surveyed could be considered “binge-watchers,” a group of people defined as watching between two to six episodes in one sitting. But taking a closer look reveals that 75 percent of that sample—177 out of 319—only spent between one to three hours watching TV per sitting. Is that amount of TV viewing time excessive? Maybe, depending on who you ask. But the majority of people reported seeing two hours or less per TV session, approximately the length of a movie.

As one might expect, these numbers increase during the weekend, but it feels disingenuous to lump together those who regularly spend the better part of a day as a couch potato with the majority who spend a couple evenings a month watching back to back episodes of Game of Thrones as binge watchers. When we think of binge-watching, the latter group isn’t what comes to mind. A more indisputable example would be the five respondents who reported spending more than five hours at a time watching television.

In the paper, here also seems to be a curious lack of relevant demographic information, including research subjects’ current health status. Maybe it’s the case that depressed people are more likely to binge-watch excessively, but maybe it’s more that chronically ill and/or disabled people are more likely to be depressed and less likely to be able to leave the house. I don’t know the answer to that question, and neither do the researchers.

Is binge-watching any more detrimental to our health than sitting at a desk all day?

More importantly, as the researchers point out (and as various large studies have shown), sedentary behavior in general is quickly being identified one of the highest risk factors of chronic illness, a lower lifespan and, yes, depression. And binge-watching is, indeed, a subset of sedentary behavior, but it’s also one of many such behaviors associated with our modern day lives. Is binge-watching any more detrimental to our health than sitting at a desk all day? The researchers seem to think it can be, due to the potential for addiction, and they flatly compare it to other binge behaviors like drug use and eating.

However, with such a broad range of what constitutes binge-watching, I’m not convinced yet. As of now, according to a spokesman I reached out to, the authors are not available for an interview.

And that’s absolutely fine. The study is a preliminary one, intended to raise as many questions as the answers it provides. It’s important to explore how technology impacts our lives and the way we navigate the world, and it’s crucial to prod us into becoming more physically active in order to maintain good physical and mental health. However, we shouldn’t be shamed into hiding our Netflix passwords in a safe deposit box because of sensationalized, inaccurate headlines that portray us as Eeyores in the making. Like any source of entertainment or creative outlet, moderation is the key.

Go watch season 4 of Breaking Bad again in less than a day every once in a while. Just make sure to go easy on the buffalo wings and take some long walks in the process. You’ll be just fine.