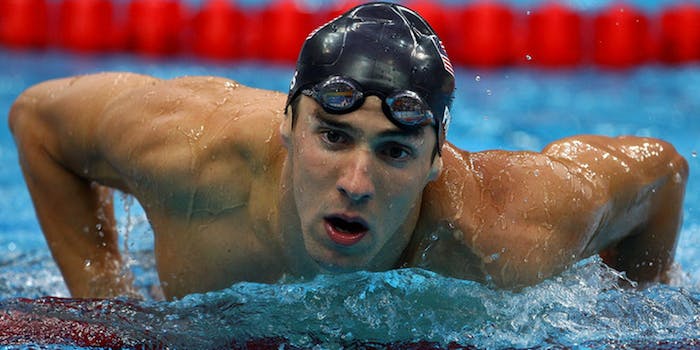 The media response to Taylor Lianne Chandler's revelation that she was born intersex illustrates our failure to understand trans issues.

Taylor Lianne Chandler, who’s been labeled “Michael Phelps’ Tinder girlfriend,” though there’s considerable doubt she ever dated Phelps to begin with, recently went public on her relatively new Facebook account with the revelation that she’s intersex: She was born with, as the Intersex Society of North America defines it, “reproductive or sexual anatomy that doesn’t seem to fit the typical definitions of female or male.”

With the fear and hatred surrounding the transgender community, coming out as intersex is even more loaded, because the very meaning of “intersex” is something people are often not familiar with. This includes the media, which just picked up the story and have provided a slew of headlines along the lines of “Michael Phelps’ girlfriend was born a man.” Phelps has yet to comment and her publicist has not returned calls.

“I was never a man, never lived as a man,” she said. “No one can say they knew me as a man or produce a photo of me as a man. There are people that remember me as an androgynous child at times because of what was forced upon me.” She went on to explain that she wasn’t diagnosed until her teens, at which point she decided to pursue gender confirmation surgery and hormones.

She also expressed fear that Phelps would “leave her” (an admittedly questionable comment if she’s never been dating him in the first place) over her revelation—a reminder of the dangers for transgender, gender non-conforming, and intersex women who disclose details of their past. If they discuss it, they run the risk of transphobic or abusive responses, while if they choose to keep their history private, they can become the victims of violent crimes from enraged partners if it ever comes to light.

A swirling, complex, and ever-changing sea of terms surrounds gender and identity. Generally speaking, when babies are born, they’re assigned a sex at birth on the basis of the appearance of their genitals. The vast majority are assigned male or female, with a small group—one in 1,500 live births—assigned intersex, because their phenotypes (and sometimes genotypes as well) are not necessarily masculine or feminine (and the fact that an infant is intersex may not be immediately apparent, as evidently was the case with Chandler).

For male and female babies, most grow up to become cisgender men and women, with a gender identity that aligns with their assigned sex at birth. For intersex babies, however, something different happens.

Historically, and today, in some regions of the world, intersex children were subjected to “normalizing” surgeries to make their genitals conform with male or female phenotypes. They sometimes needed to take hormones through development due to endocrine complications. Some later experienced gender dysphoria, choosing to transition to a different gender; in a world where binary gender is the norm, this switch was usually from male to female or vice versa.

Today, the recommended handling for intersex infants is to provide them with supportive care through childhood, and then puberty blockers when they begin to enter puberty. Once they are old enough to make an independent choice, they can decide if and when they want surgery and hormones.

In Chandler’s case, some media outlets have speculated about the genitals she had at birth, but that’s only indirectly relevant here. What we know is that she says she opted for surgery and medical treatment as a woman, that she identifies as a woman, and that she is, in short, a woman. That the media are struggling with this issue illustrates how far we have to go when it comes to the responsible handling of transgender people.

There are a numerous of issues with the media handling of the situation, illustrative not just of the lack of knowledge about what it means to be born intersex, but of the importance of covering the trans community with sensitivity. That the event should happen on the worldwide Transgender Day of Remembrance, an event to honor and commemorate the lives of transgender people lost to hate crimes around the world, is kind of a bitter irony.

Medical inaccuracies in this coverage aside, no transgender woman is “born a man.” She was born a woman, and she’s always been one—though she needed a little bit of help to get there. This is a common meme when it comes to the coverage of transgender people, though; the media want you to know about their assigned sex at birth, and they usually insist on providing the subject’s original name, too.

Thus, stories on trans women inform us breathlessly that they used to be “men” and provide their masculine names—some even go so far as to use the wrong name and masculine pronouns, in a measure that organizations like the Gay and Lesbian Alliance Against Defamation consider to be dehumanizing, and not in line with responsible journalism or AP style, the standard used by the vast majority of news outlets (including this one). In fact, GLAAD has a detailed guide on responsible journalism with respect to trans subjects.

GLAAD isn’t the only organization with recommendations on the handling of transgender and intersex subjects. The National Union of Journalists has released a best practices guideline, for example. Likewise, well-respected journalism organization Poynter has a nine-point guide on expanding the discussion of transgender issues and handling trans people respectfully.

These are not fringe or minor issues; to the contrary, the way we talk about transgender people in the media has a very real effect on how members of the public think about them. In 2013, for example, a trans woman was outed in an article and committed suicide, while Laverne Cox and Carmen Carrera had to tell Katie Couric why their genitals weren’t her business. On live television.

When the narrative that a woman was “born a man” is repeated, it exposes trans women to considerable danger. Transgender women are much more likely to experience physical and sexual assault than their cis counterparts, especially if they are women of color. One of the reasons trans women are at risk of such assault is transmisogyny—a deeply specific and gendered hatred of trans women, which stems in part from the belief that trans women are secretly men. Hence the “men in dresses” trope that surrounds trans women, and “bathroom panic,” the idea that trans women only want to get into women’s bathrooms so they can assault “real” women, underscoring the idea that transgender women are only shadowy pretenders to femininity.

It also invalidates the identity of trans women, who have had to fight, alongside the rest of the trans community, to be recognized. The struggle to access needed medical care, legal protections, and social acceptance is by no means over yet, but it’s come a long way—multiple states offer employment protections for transgender people, for example, and a number of cities, like San Francisco, offer transgender healthcare services as part of their health plans. Reporting like this undermines the identities of trans women and reduces them to nothing more than curiosities, rather than human beings.

Claiming that a woman was “born a man” is also highly sensationalist, and it plays into a larger issue with reporting on trans subjects: The topic that many publications are most interested in is transition narratives. They want to know about how, why, and when people transitioned, rather than about the day to day lives of trans people and what they experience. For trans people who are living comfortably post-transition, or who have chosen not to transition, the media find little to pick at, which makes them much less interesting. Distilling a woman down to her genitals and a short period in her history is a reflection of the belief that genitals are the most interesting thing about trans women.

This is hardly a “sex scandal,” as Radar Online put it. But it does mirror the “transsexual deceiver” trope that also directly harms trans women; if they don’t disclose their history at the start of a relationship, they’re clearly trying to hide something or to deceive their partners. Yet if they do, they run the risk of having the relationship end, or being outed to the community, or being assaulted by a transphobic would-be partner. This puts trans women in a critically awkward position, as they need to weigh their need for personal safety against the desire to be open and intimate with their partners.

We have a long way to go when it comes to the responsible handling of transgender issues not just in our own lives, but in media and pop culture. Imagine if this revelation had been met with responsible, sensitive coverage that raised awareness about what it means to be born intersex, and created a space for public conversations about the issue. Much as Mock did when she came out in a Marie Claire article in 2011, Chandler could have sparked a global discussion about awareness, and created prominence for intersex people and trans women in a society that often tries to pretend they don’t exist.