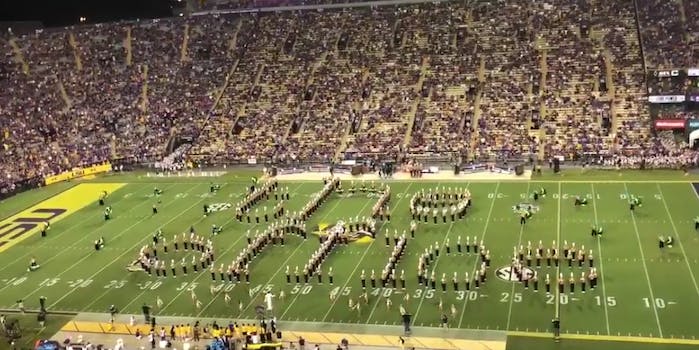 Everyone loves The Office. Both the U.S. version and the original are undeniably some of the most popular shows around, despite the U.S. version airing its final episode in May 2013. (The U.K. version ended in 2003.) That doesn’t stop us from throwing it on Netflix in the background for the 900th time—nor did it stop the LSU marching band from paying tribute during its halftime performance last weekend.

The cast loves it.

Louisiana State University beat Louisiana Tech 38-21 on Saturday, but it was the astounding performance by the band that really caught people’s attention. Some of the actors saw footage of the show, and they were just as impressed as the rest of us.

He wasn’t the only one to notice the performance either. Steve Carell, who plays titular character and headache of a boss Michael Scott, also tweeted it.

Brian Baumgartner, who plays lovable oaf Kevin Malone, shared the video on Instagram. Ed Helms, or a capella aficionado Andy Bernard, tweeted the video with a heartfelt message. “Not gonna lie, got a little choked up watching this. Feeling the loves and the gratitudes,” he said. “Thanks for the coolest shout ever @LSUBands. GO TIGERS!!!”

This. Is. Awesome. What school is this? Cause I think I need to go visit.

Not gonna lie, got a little choked up watching this. Feeling the loves and the gratitudes. Thanks for the coolest shout ever, @LSUBands. GO TIGERS!!! https://t.co/SmjdSAfdJa

Angela Kinsey, who plays our favorite cat-loving grump Angela Martin, added: “Some The Office love from Louisisana! Geaux Tigers!” Even the show’s Twitter account got ahold of it, tweeting the video with the caption “Catch us jamming to this at Cafe Disco,” a callback to episode 27 of season 5, in which Michael Scott makes a disco in his old office.

LSU staffers saw the love they were getting from the cast members and responded with the perfect GIF.

Not a bad day at all.