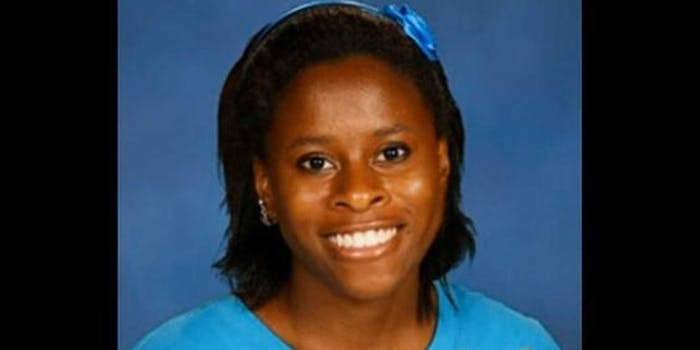 More than 27,000 people have signed online petitions in support of 16-year-old Kiera Wilmot.

Later reports provided more detail: The 16-year-old honor student had combined aluminum foil and toilet bowl cleaner in a plastic water bottle, resulting in a firecracker-loud pop and a little smoke. Nobody was hurt, no property was damaged, and Wilcox never tried to hide what she had done.

Even so, she was arrested, handcuffed, expelled from school and slapped with felony charges. Wilmot’s own principal, Ron Pritchard, told local news: “She is a good kid [….]  Honestly, I don’t think she meant to ever hurt anyone. She wanted to see what would happen [when the chemicals mixed] and was shocked by what it did.  Her mother is shocked too.”

While the incident could be seen simply as a stroke of curiosity, Polk County Schools responded with a statement strongly implying that Wilmot is threat to those around her.

Anytime a student makes a bad choice it is disappointing to us. Unfortunately, the incident that occurred at Bartow High School yesterday was a serious breach of conduct. In order to maintain a safe and orderly learning environment, we simply must uphold our code of conduct rules. We urge our parents to join us in conveying the message that there are consequences to actions. We will not compromise the safety and security of our students and staff.

The response from the actual scientific community has been equal parts outrage and WTF. DN Lee, who blogs for Scientific American as “The Urban Scientist,” wondered how much of Polk County’s overreaction was motivated by standard zero-tolerance policy and how much by racism:

I don’t like what our public education (and justice) systems do to urban youth (e.g. the discipline gap with  Black kids). … I worry what this will mean to [Wilcox’s] family financially. What will it mean for her future? Will graduating from an alternative school prevent her from attending college? Will she be marked as a trouble maker? Will she have a criminal record that prevents her from gainful employment and a meaningful life? More immediately, will she get locked away for 20 years? Sh*t like that happens to kids who look like her.

Thaler added: “Science in messiest when we just start learning how to turn our curiosity into something testable. … High school programs should be nurturing that curiosity and fostering responsible experimentation, not punishing it. I asked my twitter followers, many of whom are practicing scientists, whether they, during high school, had accidentally caused an explosion in the course of scientific curiosity.”

So he started a Twitter poll, asking, “How many of y’all accidentally blew something up in high school using science?” The answer was pretty close to “all of them.” Most responses mentioned mishaps far greater than Wilmot’s little experiment:

Scientists aren’t the only ones who went online to show support for Wilmot. There are at least two Change.org petitions in her favor: “Petitioning Dr. John A. Stewart, superintendent, Polk County School District: Drop charges and re-enroll Kiera Wilmot,” and “Petitioning Joe Hall, the Bartow Police and Bartow High School: Drop charges against Kiera Wilmot.”

Hundreds of posts tagged with Wilmot’s name appeared on Tumblr. “QueenBandora,” for example, linked to a Feministing post about Wilmot and added “I went to Bartow high school and I know for a fact there a bigger problems there than this girl and her science experiment. Way to go Polk County.”

Tumblr also saw many links to a US Prison Culture blog post highlighting Wilmot’s treatment as merely the latest example of “Black girls and the school-to-prison pipeline.”

The OCD Diaries called Wilmot’s treatment “Proof we’ve gone off the deep end,” while Salon noted, “America hates science. A student scientist is arrested for experimenting with Drano. No wonder we’re falling behind the rest of the world.”

Dan Satterfield, a meteorologist who blogs for the American Geophysical Union, called Wilmot a hero and said, “The only good news out of this is that a bright, inquisitive student whose science experiment went pop when she was not expecting it, will not have to be in such a horrid school system. Truly disgusting what happened to this poor girl, but I cannot fathom a jury convicting her.”

As of this writing, the two petitions listed above have been signed by a total of more than 27,000 people.