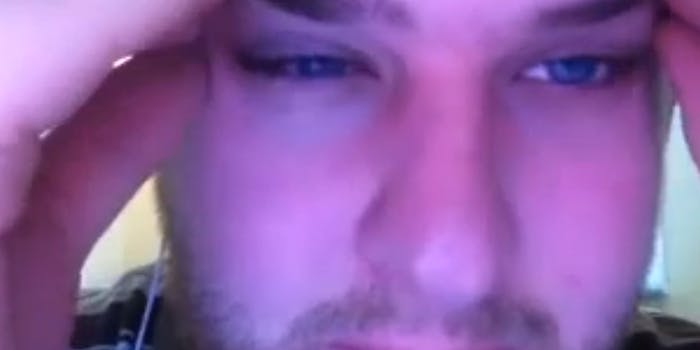 Why Jonathan Harchick filmed himself counting to 100,000

What's more impressive: that an aspiring filmmaker spent 77 hours to reach six figures or that people are actually watching?

Any idea how long it takes to count from zero to 100,000? If you speak as quickly as Jonathan Harchick, you’re going to need about 77 hours.

And you’re going to need a whole boatload of patience. The first thousand is the easiest. After that, things can get pretty hairy.

Harchick, who found himself in the news last year when he compressed more than 571 hours of footage into one YouTube video, told the Daily Dot that he recently completed the daunting task for a class on advanced television production at Pittsburgh’s Robert Morris University. The assignment bestowed unto to him: Make an “experimental film,” something entirely original and unique.

“Everyone else in the class wrote scripts and hired actors and did what you would expect from most film students,” Harchick said. “Honestly, part of the reason I decided to do this is because I thought it would be easier, but about three hours into shooting it, I realized it wasn’t easier.”

Finding 77 hours to do nothing but count is in itself an arduous undertaking. Harchick was a full-time student with a part-time job on the side, and he couldn’t exactly check out for three full days to focus on getting to six figures.

Harchick said the the whole video took about three months to make. He shot it mostly in his bedroom, but a few of the clips were taken from his school and the radio station where he held an internship. He even shot some of it from his sister’s wedding, which must have gone over well with the family.

“I took a break every time I reached a thousand, so a break at 1,000 and 2,000 and so on,” Harchick said. “I also had to stop the camera in the middle a few times because I either lost count or someone interrupted me.”

A few of those mistakes have made it into the 10 videos he’s hosted on his NonSequiturMedia2 YouTube channel. Harchick said that critics are always quick to point out that he missed 99,991 in the final clip.

“I find it kind of funny,” he said. “It lets me know that people actually watch it.”