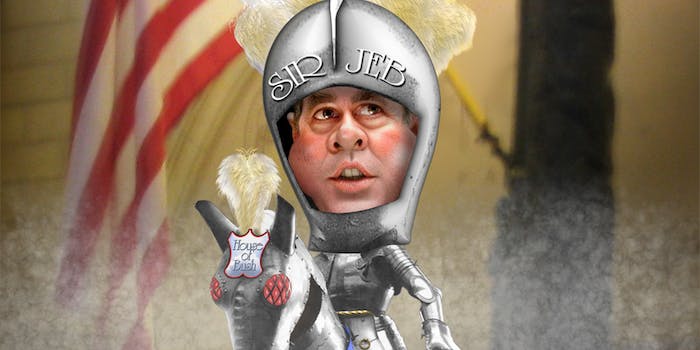 Jeb Bush’s campaign is everything wrong with the GOP

His tech is stuck in the past.

Another week, another GOP Presidential candidate. Former Florida governor and aspiring dynastic ruler Jeb Bush finally gave his formal announcement that he, too, will be seeking the Republican nomination for President in 2016. That makes him yet another candidate in the race; Scott Walker, Chris Christie, Bobby Jindal, and John Kasich are all, meanwhile, weighing their own run, while making overt trips to Iowa and dropping not-so-subtle-hints.

While Bush might have the most recognizable surname in this group (for better or worse), he will have to scramble to match the staff support and cash flow as other Big Name Republicans—like Marco Rubio and Lindsey Graham.

One of the ways Bush could do this is by arming his campaign with the blend of human and technological capital that Barack Obama’s campaign enjoyed in 2008 and again in 2012; a campaign run by data more than political intuition allows for resources to be saved while maximizing funding and voter turnout.

Hillary Clinton is now making a solid effort to emulate the Obama campaign’s tech tactics—and, hopefully, its success—by drafting a massive volunteer army to help the campaign collect data and narrow down its approach from a national campaign to one that really only focuses on eight or 10 states. The same digital strategists that helped Obama take the presidency are on standby for Clinton.

[Jeb Bush] will have to scramble to match the staff support and cash flow as other Big Name Republicans—like Marco Rubio and Lindsey Graham.

The restructuring of Clinton’s campaign should be a wakeup call to her Republican rivals. Campaigns are not run by television ads and stump speeches as much as they are now controlled by data collection, social media, and local outreach.

Although he’s just made his official entry in the race, Jeb Bush has already demonstrated a key lack of understanding in how to build the kind of tech-savvy campaign he needs to outlast the primaries. Bush’s repeated slipups and misguided understanding of technology is not just damaging to his campaign but is a reflection on his policies surrounding technology as a whole, as well as the GOP’s troubled relationship with Silicon Valley.

After Obama transformed the relationship between political campaigns and the Internet, creating the right tech team for a campaign has become of paramount importance. Last April, Clinton hired Google’s “Director of Product Management for Civic Innovation and Social Impact” to work as her Chief Technology Officer, hoping to release “a glitzy, shiny suite of apps” for her supporters to interact with the campaign on a more in-depth level.

On the Republican side, Rand Paul has likely done more to woo Silicon Valley than any other GOP candidate, speaking at several fundraisers around the Bay Area, as well as opening up his own office in the same neighborhood as many startup favorites.

Bush has attempted to emulate these approaches but has largely come across as a fumbling luddite trying too hard to stay hip to the kids’ new toys. For starters, Bush’s hire for Chief Technology Officer, Ethan Czahor, was the co-founder of Hipster.com, a photo-sharing app that once published its users address books online before being bought and killed off by AOL (the URL now redirects to the AOL home page).

Bush has attempted to emulate these approaches but has largely come across as a fumbling luddite trying too hard to stay hip to the kids’ new toys.

Czahor’s first job as Jeb Bush’s CTO was to cleanly publish all eight years’ worth of emails Bush received while Governor of Florida, between 1999 and 2007. The move should have made Jeb Bush appear to be a transparent foil to Hillary Clinton—who, at the time, was quite busy defending her use of a private email server while Secretary of State.

Indeed, Bush’s team barely redacted any information from the emails, meaning the private data and social security numbers of many Bush constituents and staffers also found their way online. Czahor would later be forced to resign after BuzzFeed aggregated several racist and sexist tweets published by Czahor before the Bush campaign hired him.

It’s a fall from grace for a politician who once claimed to be “digital before digital was cool”—and even included his Blackberry in his official gubernatorial portrait.

However, it’s also that far off from what one would expect if they take a look at Bush’s policies on many major issues relating to technology. Before the Federal Communications Commission ruled to regulate Internet Service Providers under Title II, Bush called net neutrality “one of the craziest ideas I’d ever heard.”

On surveillance, an issue that riles up Silicon Valley in particular, Bush called the massive expansion of the National Security Agency’s metadata program “the best part of the Obama administration.”

Of course, these policies don’t really differentiate Jeb Bush from most of the Republican field as it stands today. Ted Cruz famously derided net neutrality as “Obamacare for the Internet.” In the immediate wake of the attacks on Charlie Hebdo in Paris, Marco Rubio argued for a permanent extension of the NSA’s ability to spy on millions of Americans. Lindsay Graham, noted war hawk, said he was “glad” the NSA was spying on Americans, including himself. Chris Christie called fears of the NSA’s programs “exaggerated and ridiculous,” while also coining the term “civil liberties extremists.”

Bush called the massive expansion of the National Security Agency’s metadata program “the best part of the Obama administration.”

In fact, the only GOP candidates who have come out against the NSA programs are Ted Cruz and Rand Paul.

So it’s no mistake or fad that these two are the Republican candidates who are coziest with Silicon Valley and, therefore, the closest to the funding and support they need to secure the nomination. If Jeb Bush’s neophyte handling of how his campaign should deal with technology didn’t scare away Silicon Valley’s backing, then his broad support for the NSA likely sealed off the spigot.

It’s not entirely ideology that defines tech success—Hillary Clinton, for all of her campaign savvy, has not exactly been a vocal opponent to the NSA or a supporter of net neutrality. However, it’s hard to stay in the race if you can’t even getting your modem running.