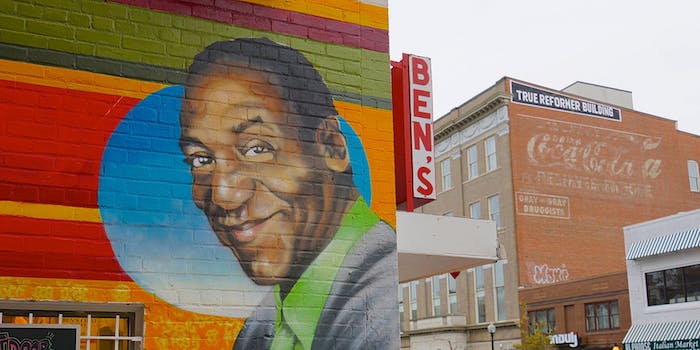 If the past has finally caught up with Bill Cosby, what does that mean for his show's future?

Last week, the past finally caught up with Bill Cosby in a big way. After decades of swirling allegations came back to the surface following a Hannibal Buress stand-up routine, Netflix and NBC both ended their associations with the comedian. Netflix declined to air Cosby’s forthcoming stand-up special, while NBC pulled the plug on a comeback pilot for the former sitcom icon. In an even more decisive blow, TV Land decided to cancel its syndication agreement with Cosby, pulling all future episodes of The Cosby Show from its line-up.

As 17 women—and counting—have come forward with brutal (and remarkably consistent) claims that Bill Cosby sexually assaulted them, no one is likely to lose sleep over Cosby’s TV career remaining in the past. But what about The Cosby Show? Should one of the most successful, game-changing sitcoms in television history suffer because of its creator’s reputation? In a recent post for The Toast, Roxane Gay argues that while the show’s groundbreaking legacy cannot be overstated, “the show’s importance no longer matters.” Gay says, “It cannot matter… We have to say enough. We have to stop implicitly or explicitly supporting Cosby. We cannot justify our fondness for him any longer. We have to demand that his show be taken off the air.”

While Flavorwire’s Pilot Viruet rebuts that the removal of The Cosby Show “is akin to the erasure of an identity,” the show’s impact is impossible to erase from history, even while it might be time to yank Cosby itself. After the program debuted in 1984, The Cosby Show spent five years as the highest-rated show on television, redefining the sitcom at a time when shows like Dallas and The A-Team dominated the airwaves. When the Huxtables arrived in America’s living rooms, the family comedy had been declared all but dead; two years later, television was full of clans like the Huxtables, ones that may not have shared their skin color but recalled their same pragmatic, hard-nosed warmth. Cliff and Clair Hutxable’s home became the template for an entire generation of TV households, from the Seavers to the Tanners.

But more importantly, the Huxtables helped make room for a diversity of black representation simply by virtue of its enormous popularity. As Slate’s Willa Paskin quips, “Nothing makes networks ‘brave’ like success.” And in the wake of The Cosby Show’s Nielsen-shattering domination, shows like Fresh Prince of Bel-Air, Hangin’ with Mr. Cooper, Martin, Family Matters, and Living Single all proved successes, and Cosby spinoff A Different World also proved a Top 10 hit. However, throughout the ‘90s, major networks moved away from black-centric programming in an attempt, as Paskin notes, to “cater to advertisers who started to cater almost exclusively to affluent white people.” Shows like Moesha and Girlfriends had to find homes on smaller networks like the WB and UPN, before being ejected from TV altogether.

When the two networks combined in the form of the CW, that network began to cater its programming for an audience of white teenage girls and their mothers—with a lineup that included Gossip Girl and America’s Next Top Model—but that model is slowly changing. This year, the CW debuted the critically lauded Jane the Virgin, which almost immediately got picked up for a full season. On ABC, Cristela and Black-ish have proven to be big hits at a time when television offers few representations of families of color. Outside of BET, the last successful black family sitcoms were The Bernie Mac Show and Everybody Hates Chris; recently cancelled Fox sitcom The Cleveland Show starred cartoons.

In particular, Black-ish—a show that shares Cosby’s interest in the black middle-class while making a more overt commentary on race—would not be possible without The Cosby Show’s influence. While many have argued that Cosby was apolitical, the Root’s Teresa Wiltz argues that its very existence was profoundly radical. “Many said that the Huxtables existed on a rarified plane far above life’s harsher realities, that their lives didn’t reflect real black lives, but were some sanitized, made-for-TV fantasy,” Wilts says. “But there were, and are, millions of black families like them: college-educated, functioning, loving, achieving black folks. Cosby put a spotlight on that reality, affording African-Americans the luxury of being black without it being a problem.”

Slate’s Jason Bailey further argues that the show’s feminist legacy shouldn’t be overlooked. In The Cosby Show, Clair isn’t just a successful working mother busy trying to have it all; the Huxtable matriarch was an outspoken advocate for equality in her household, fighting sexism while setting an example for her daughters. (Transgender advocate and writer Janet Mock has cited Clair Huxtable as her personal possibility model of black womanhood.) In one episode, Denise’s boyfriend, David, asks Clair why she doesn’t stay at home with the kids, given that her husband can support her. She retorts, “That is a sexist statement, young man. Why don’t you ask Dr. Huxtable that question?” It’s a bold question and an indictment of not just sexism but TV itself, a medium that makes room for too few strong women.

But Cosby’s own relationships with women, whether suspicious or outright criminal, call into question the show’s gender politics, as argues the Crunk Feminist Collective. Bill Cosby might have created an outspoken woman, but what about the decades of women who spoke up and weren’t heard?

Cliff Huxtable’s progressive gender politics and the show’s overt rhetoric of anti-sexism has struck me in my adult years as decidedly progressive for the time. But it’s a sham. How can a man who is a vicious hater of women get all the rhetoric right, offering up an idealistic view of what a ‘good, feminist family man,’ might look like? It turns out that dudes, or their carefully crafted representatives, can sound right, and seem right, and still be all the way wrong. It turns out that you can have progressive feminist politics on the outside and still be deeply emotionally damaged and fucked up on the inside… But let him die. Stockholm Syndrome be damned.

This argument recalls a larger debate on whether you can like art by bad people; can you separate the creation from the creator? The problem with The Cosby Show is that it was a deeply personal project for Bill Cosby, informed not only by his stand-up act but also loosely based on his personal life. Cosby had a bad habit of accidentally referring to his on-screen character as “Bill,” showing that it was hard even from him to separate himself from his work. For Salon’s Brittney Cooper, the content of his work then feels like a “lie.” Cooper writes, “He has asked us to invest not only in the lie of his own life, but in the larger lies of black respectability and patriarchy.” Considering The Cosby Show’s earth-shattering impact, it gives the show an added responsibility to tell the truth.

This point is important. The reason Hannibal Buress called out The Cosby Show to begin with was because of its creator’s increasingly social conservatism when it came to criticizing the black community—should Bill Cosby be telling anyone how to behave, let alone black folks? What Bill Cosby’s selling might be a lie, but Cooper realizes Cosby is very real for its audience; it also means that we, as a culture, must do better in creating a greater diversity of representations that we can relate to. One of the dangers of a single story is that it means only certain lives get represented at the expense of others; however, it also means that when our heroes fail us, we have few other voices to which we can turn. If not for the Huxtables, who else do black families have?

As Time’s James Poniewozik reminds us, it shouldn’t be our goal to expunge The Cosby Show from the past. Poniewozik writes, “We shouldn’t erase The Cosby Show‘s place in TV history—the way it changed comedy, represented the unrepresented and reframed African Americans in pop culture—even if it were possible to do so.” Instead of killing our TV mother and father, our goal should be to create new ones, putting other black possibility models in their place. As Brittney Cooper argues, that means creating new televisual narratives about what it means to be black. Cooper writes, “[W]e, black, overachieving professionals, are allowed to be different kinds of men and women than Cliff and Clair, to have different kinds of families than they had, to be messy and not quite together, to be imperfect.”

If there’s one thing that Roxane Gay gets wrong in her essay, it’s that the show’s importance no longer matters. The Cosby Show’s legacy matters a great deal, not only in the annals of TV history but to the Clair Huxtables of the world, both the real women she inspired and a generation of characters who owe a debt to her. In an era where Shonda Rhimes is redefining black femininity on television with Scandal and How to Get Away with Murder, Clair Huxtable is more important than she’s ever been. A generation of audiences grew up with Clair teaching them what a strong, successful woman looked like; what television must do is create 100 more women like her, ones that won’t have to answer for their creator’s sins.

You can’t kill The Cosby Show just by pulling it from the airwaves. The only way the show will truly die is if we work together to more forward—by finally getting it right.