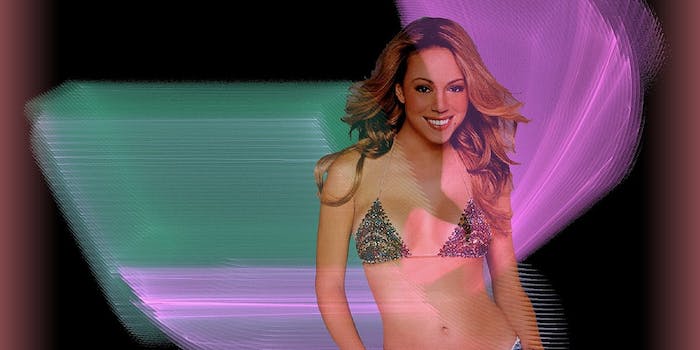 If you're basing your self-worth off Mariah Carey, you have bigger problems than Photoshop.

Last Friday, Jezebel obtained and published some un-retouched photos of Mariah Carey. To their credit, most celebrity websites yawned in response. “Photo retouching has become pretty commonplace when it comes to fashion and celebrity photographs,” opens the article by Rolling Out. “It’s nearly impossible to look at any magazine cover or photo spread without seeing the magic of Photoshop.”

CelebBuzz calls the revelation that magazines manipulate their cover models “a conversation I think we’re all a little tired of hearing.” Stylite completely dismisses the fact that magazines photoshop their cover models, saying that it’s so obvious it isn’t even a story. Instead, they insist, the real story is that Terry Richardson is a shitty photographer.

They are absolutely correct that the “OMG photoshop!” storyline is over-done—in part because these very same magazines have dutifully reported on every single photoshop “scandal” that has come up in the last 10 years, from Lady Gaga to Lena Dunham, and many, many others.

It doesn’t just happen with women, by the way: the same conversation pops up about painted-on abs in 300 and the Twilight movies. I know from conversations with both male fitness models and their photographers that waists are trimmed, shoulders and biceps are rounded, and backs have their V-shapes enhanced on a regular basis in male physique photography.

You would think that by now it is common knowledge that images in magazines are manipulated, and therefore it’s no big deal, right? Wrong. Every time a new example appears online, the social media outrage machine stokes its fires and bellows out a fresh burst of steam. In tweets and Facebook status updates and comments across the blogosphere, the general refrain is always the same.

It goes something like this: Photoshopping people’s bodies is outrageous and damaging. It gives young women and men (and emotionally vulnerable adults) unrealistic ideas about beauty. It puts unattainable goals into their heads. They start to believe that because they don’t look like the images in the magazines, they are ugly. Their self-esteem is ruined, and the next thing you know they have depression and eating disorders, and (for the men) steroid use.

Basically, the narrative is that people’s entire lives go down the crapper because deep down inside they believe that when they look in the mirror they should see something that looks exactly the same as what they see on a magazine cover.

Let’s stop for a moment and think about that.

Low self-esteem, body dysmorphia, and eating disorders are real problems, and they need to be taken seriously. The way to address these problems, at least in part, is to address some of the psychological habits that can exacerbate or perpetuate a negative self-image. Looking at a photo of a person in a magazine and thinking, “That is what attractive people look like when they wake up in the morning and look in the mirror” is one of those bad psychological habits.

I know how heartbreaking it can be if you see your son or daughter, or even your friend, pouring over glamour magazines or fitness magazines, tied up in knots with anxiety because he or she feels “ugly” compared to the toned, tanned, narrow-waisted, wide-shouldered, clear-skinned images on the pages.

Because I will be honest with you: if you know people who are basing their self-esteems on comparisons they make to magazine cover models, then Photoshop manipulation is actually the least of their problems.

First, the photographer has usually spent hours of training and practice learning exactly how to set up the extremely expensive lights that were used in the photoshoot. Depending on what kind of cover photo it is, there are probably multiple lights coming from multiple angles, to soften the shadows. Photographers often use large metallic “reflectors” (or “bounce boards”) to reflect light up into the model’s face to remove dark shadows from under the eyes and chin.

The models are also wearing make-up. All of them, even the men, most of the time. Sometimes this make-up is just to even out skin tone, but sometimes it is to hide blemishes, and sometimes it is to create cheekbones and jawlines that just wouldn’t be as prominent if the model were going au naturale.

Lastly, although it varies from photographer to photographer, and it depends on the type of photoshoot, you can make a reasonable guess that for every photograph you see in the magazine, the photographer actually took up to 100 more photographs during the shoot. You are literally seeing the best one photo out of every hundred that were taken in many magazine spreads. Sometimes that number is even higher.

All of this, please notice, is going on before those photos ever get to the photoshop “retouching” phase. Yet the lighting, the make-up, and the number of photographs alone are all reasons you can rest assured that when that model wakes up in the morning, what they see in the mirror is not what you are seeing in that magazine. If you passed that model or celebrity on the street, what you would see would not be what is in that magazine.

The comparison game is always a quagmire, so let’s face it: even if we magically outlawed Photoshop tomorrow, it wouldn’t solve the world’s obsession with beauty or the self-esteem issues that go along with comparing yourself to a magazine cover.

Rallying against Photoshop won’t help your friend or child with low self-esteem: education will. The best part of this, though, is that we live in a world where photo manipulation programs are on virtually every computer. Kids are using Instragram filters to re-touch their own photos in grade school these days. The fact that fashion, celebrity and fitness magazines all touch up their cover models should not be a difficult subject to broach with people in this day and age.

Retouch artists actively promote their own work, and there are numerous pages dedicated to showing off what retouching can do. DeviantArt, a website popular among amateur artists of all types, has literally hundreds of tutorials for people on how to retouch photos themselves.

These are your educational tools, and if you use them correctly they should be very empowering. Stow away the outrage at magazines, get rid of the anger at the “beauty industry.” Rage over retouching has never changed anything, and it never will.

Photo via congaman/Flickr (CC BY 2.0)