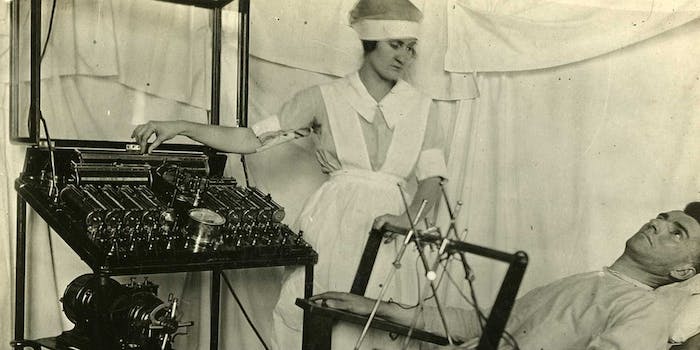 Is the gun lobby using mental illness as a scapegoat for violence?

As a mental health advocate and mentally ill person, I always cringe when I hear about episodes of rampage violence—mass shootings, stabbings, and other examples of the evil we perpetrate against each other. My heart goes out to the victims, who were going about their daily lives in schools, in movie theaters, in summer camps, in their sororities, before having all sense of normality wrenched away. I’m saddened for their families, for the survivors, and for everyone who grapples to understand what just happened.

And I also know that I need to brace for what is coming next: liberals and conservatives alike blaming such incidents on mental illness, arguing that “no sane person” would do such a thing and using rampage violence as a sudden platform for talking about mental health issues. Those same individuals are nowhere to be seen when we need their support as we fight to better access to care without stigma and barriers, but they’re suddenly everywhere after someone with a gun has mercilessly shot people—whether or not that person actually was mentally ill.

The gun lobby is one of the worst offenders here, leaping to blame such incidents on mental illness in order to deflect attention away from a much bigger national problem: guns. In the wake of the horrific Sandy Hook shootings, the NRA characterized mass shooters as “insane,” “monsters,” and “lunatics,” and the NRA has spoken out in favor of forced institutionalization in the past. The NRA maintains a steady library of talking heads and commentaries neatly pushing all responsibility for violence in America onto mentally ill people.

When the NRA comes under fire in the wake of rampage violence, it attempts to defend itself by targeting mental illness—in a variety of creative ways. It doesn’t just label mass killers as insane and suggest that coercive treatment like forced medication and institutionalization would be a better tool for preventing violence—the gun lobby has even suggested in the past that some psychiatric medications increase the risk of violence, putting mentally ill people at a double bind. Damned if you do (take your Prozac) and damned if you don’t.

Some of the success of the NRA’s deflection campaign has to do with the cultural zeitgeist. The organization gets away with it because many people believe that only crazy people do evil things, and thus, when an act of evil on this scale occurs, the problem is clearly a mental health condition. Yet, this runs contrary to actual facts: Only 4 percent of violent crimes are committed by people with mental illness, and, in fact, mentally ill people are more likely to be the victims of violent crimes because they are viewed as easy targets.

The response to rampage violence in America is often a two-pronged cry of outrage demanding coercive mental health services and better gun laws. Research, and facts, suggest that only gun control would be a good target for resources dedicated to the reduction of rampage violence—but also that there’s a larger issue with gun culture and violence in the U.S. Elliot Rodger’s ability to easily get a gun definitely played a role in his decision to kill seven people, including himself, and the culture he lived in was a driving factor.

The gun lobby’s scapegoating of mental illness has been unbelievably successful not just in the media but amongst members of the legislature. Even as the media (including prestigious and ostensibly liberal publications like Mother Jones) blame mental illness for mass violence, legislators and members of the public are paying attention. Major shootings tend to trigger attempts to pass comprehensive and aggressive mental health bills that include measures like coercive treatment, forcible reporting from psychiatric and mental health professors, and increased leeway on the standards for involuntary commitment, all measures opposed as ineffective by mental health advocates.

Meanwhile, attempts at more aggressive gun control either fail long before they have a realistic chance of getting through the House and Senate, or they’re so watered down by the time they get signed that they might as well be meaningless. Such is the power of the gun lobby, that organizations like the NRA can effortlessly control the outcome of major votes even in the face of considerable social and cultural support for increased gun regulations. The gun lobby insists that it’s protecting the Second Amendment rights of all Americans by fighting for the right to own guns, but it refuses to acknowledge that it is both contributing to the huge number of guns on the street and to the violent and entitled culture that surrounds gun ownership in the United States.

While there are numerous responsible gun owners in the United States (I’m one of them) and the NRA claims to be advocating for them, what it’s actually doing benefits the further scapegoating of mental illness in the U.S. and the thriving violent gun culture that overrides our cultural landscape.

One of the ways the NRA and gun lobby works so effectively is with a vast public relations and disinformation distribution machine that works vertically as well as horizontally. It’s not just that the gun lobby plasters the news and works its way into the offices of legislators. It’s also highly active on the digital landscape, sowing disinformation and encouraging the dissemination of erroneous information about mental health and violence. This is most acute in the real-time processing of episodes of rampage violence, when the Internet is moving at warp speed to deal with rapidly cycling information, and the deadly voice of the gun lobby is everywhere, whispering into ears on Twitter, Facebook, and other social media networks.

The ground for blaming such incidents on mental illness is already quite fertile. All the gun lobby needs to do is plant a seed, and wait for the digital landscape to water it, spreading information like wildfire without pausing to verify facts or question the level of self interest involved in statements from the gun lobby claiming that gun culture shouldn’t be held accountable for gun violence.

Photo via otisarchives4/Flickr (CC BY 2.0)