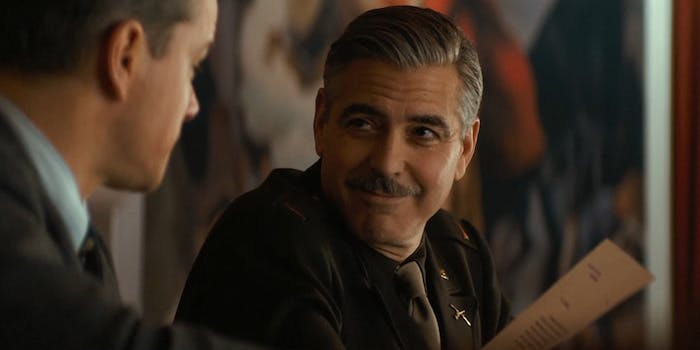 What we learned from George Clooney’s leaked Sony emails

If George Clooney can't live in a bubble, no one can.

In Hollywood, opening weekend must feel like the most gut-wrenching time of the year for a filmmaker—the culmination of all of your hard work. Sometimes filmmakers will spent over a year (if not even longer) working on a feature-length film. All of the script revisions, casting heartaches, and set problems either amount to a film that everyone adores or isn’t quite so fond of.

For filmmakers trying to break into the upper Hollywood echelon, it’s a moment that could make or break your career. Think of Gone Girl’s Rosamund Pike, a talented actress who had long been waiting for her big break, but after it comes, what happens next? You’ll have to wait for the reviews to find out.

For someone like George Clooney, though, opening weekend should feel like slipping into a warm bath, the water full of adulation, praise, and dollar signs. Sometimes, though, that water is bitter cold, as in the case of The Monuments Men, met with harsh criticism from critics. William Goss of Film.Com wrote in his review of the film, “[The Monuments Men is] a frustratingly flat film that drifts from moment to moment with a curious lack of urgency and an overbearing sense of self-importance.” Lisa Kennedy of the Denver Post further added, “Think of [The Monuments Men] as Inglorious Art Historians.”

However, all celebrities endure flops from time-to-time and if anyone could endure a flop, certainly it should be George Clooney. Apparently, that’s not the case.

In the most recent string of leaked emails from the Sony Pictures hack, the golden goose that keeps on giving birth to celebrity golden eggs, George Clooney’s correspondence with Sony Pictures executive Amy Pascal showed a very sensitive and tender side to the actor turned filmmaker. “It’s getting worse…” is the headline of an email dated January 29 of this year. “Let’s just make it a hit. I haven’t slept in 30 hours. And it’s 7am.”

I can’t help but picture this mental image of Clooney, with five o’clock shadow, pacing outside his Italian residence (while his gorgeous wife sleeps) musing over and over in his head as each negative review comes in—as if he was waiting for an old friend in a café, but every time he turned to the entrance, it was an unfriendly critic.

In an attempt to offer solace to Clooney, Pascal replied, “We will protect you by making money…that’s the best revenge.” The film at least broke even for the studio, earning nearly $80 million domestically on a $70 million budget—which isn’t all that bad, all things considered. “I adore you, Amy,” Clooney responded. “You are literally the only person running a studio that loves film. I fear I’ve let you all down. Not my intention. I apologize. I’ve just lost touch…Who knew? Sorry. I won’t do it again.”

If making a film that earned over $150 million worldwide is “letting” the studio down, I’d really hate to see the kind of emails Clooney sent the executives of Universal for Leatherheads. That film earned a little over $30 million domestically on a $58 million budget. It also received some fairly negative reviews as well. Let’s hope Clooney’s emails to Universal didn’t include an eloquent suicide note depicting Clooney racing into the Italian Riviera wearing the Batsuit from Batman & Robin.

I can’t help but feel bad for Clooney, who seems like he genuinely cares about what people think of him. Here is a rich, successful man who embodies the classical looks and charm of the ideal Hollywood leading man. Even though he has the world literally at his fingertips, even someone like George Clooney can’t seem to escape the impossible scrutiny of the Internet. In a culture where we are inundated with constant media feedback the moment something happens, it is apparently impossible to escape criticism—whether you are one of Hollywood’s most treasured commodities or not.

Even Christopher Nolan, who is seen among many as the Second Coming among some cinephiles, received somewhat of a backlash himself after his latest movie Interstellar received less-than-stellar reviews. I doubt there is anyone in this day and age that can truly escape or avoid the pull of the Internet’s glaring and always critical eye.

Then again, it seems like Clooney is exercising some privilege here, especially for a movie star who is immeasurably revered. Clooney—as a successful white male in Hollywood—has never had to endure the condemnatory treatment certain celebrities face, like Anne Hathaway or Jennifer Aniston, who are constantly asked about their weight, looks, or why they aren’t having children yet. Clooney has never had private pictures leaked that he sent to his wife while jetting around the country scouting locations for Ocean’s 100.

After all, it’s not like people came running out of The Monuments Men rioting in the streets, burning large quantities of posters from the film, and turning our society into a Fahrenheit 451-esque dystopian world where cinema is outlawed and movies are thrown out like trash. However, given the subject matter of the film itself (Clooney’s character and others try to save art from being destroyed by the Nazis in World War II), there would be a certain irony to that outcome.

It almost seems peculiar to visualize Clooney being affected by the negative reviews; it humanizes him in a way that he probably didn’t exactly ask for, a glimpse into Clooney’s behind-the-scenes life. If anything, though, it might affirm the death of echo chambers everywhere. No longer are celebrities immune to the words of “average” people across the World Wide Web. Now nearly everyone has a Facebook page or a Twitter account, and people aren’t afraid to say what’s on their mind. In 1999, Drop Dead Gorgeous star Allison Janney was unaware her film (later a cult classic) got scathing reviews. That would be difficult to pull off today.

Even when Ben Affleck was cast as Batman in the upcoming superhero film Batman v Superman: Dawn of Justice, Warner Bros. warned him against reading about his casting online. Affleck merely peeked at the first comment on an article about his casting as the Caped Crusader, which read “Noooo…..!” He then promptly closed out of the link and tossed aside his computer, vowing not to read any more unpleasant comments about his casting. We live in an era where if you want your opinion heard, all you have to do is type in a few words and your voice can be heard loud and clear.

There’s been some debate over what the role of journalism is in the Sony hack. Should we even be talking about this at all? After all, these are a bunch of private film studio correspondences between studio executives, producers and actors. If anything, it will change how they communicate, as Meg James and Ryan Faughdner of the L.A. Times claim that these hacks are “expected to force significant changes in the way freewheeling Hollywood does business.” Film historian Wheeler Winston Dixon further argued that it’s “a wake-up call to the entire industry.”

Regardless of whether or not film executives will be keeping their opinions more to themselves, one thing is certain: Even though he appears larger-than-life with his dashing good looks and savvy charm, deep down he is just like us—and he wonders what average folk think about him. He’s not immune to criticism, and he experiences self-doubt. Although George Clooney appears twenty feet tall at your local multiplex, in reality he’s no taller or shorter than you or I.