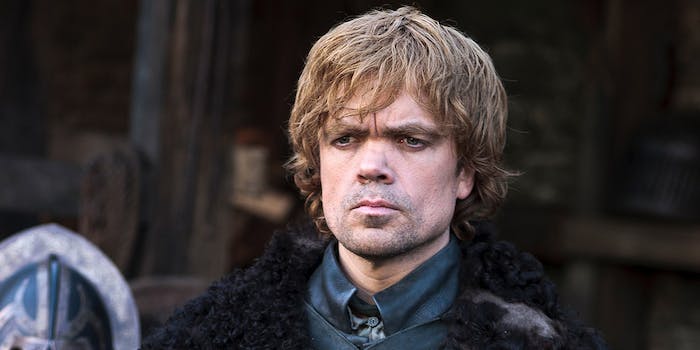 Has ‘Game of Thrones’ sold its soul to the Hollywood devil?

If you're upset about Lady Stoneheart, you're missing the real issue.

Warning: There are some serious spoilers for A Song of Ice and Fire ahead. That means if you’ve just been watching the show so far, or if you haven’t finished A Storm of Swords yet, you probably shouldn’t read this.

The fourth season of HBO‘s mega-hit Game of Thrones is over, but the debate about what the show’s success means for A Song of Ice and Fire—the book series it’s based on—is just beginning.

While the finale wowed non-book readers who watch the show (jokingly referred to as “unsullied” by the books’ Internet fanbase), those who had more experience in the world of Westeros were livid. Much of the controversy took place on Twitter, where the term “Lady Stoneheart” was trending. For those who may have forgotten, Lady Stoneheart is the reanimated Catelyn Stark. She was returned to life through the magic of R’hllor—the Lord of Light—and goes on to lead the Brotherhood Without Banners in a quest for vengeance against the Freys, Boltons, and Lannisters.

Many fans expected the season finale to end with a brief teaser of Lady Stoneheart, sending non-readers into a Red Wedding-like fervor and building unparalleled amounts of hype for next year. It seemed like a perfect “holy shit” moment on which to end the season. After all, the third book—A Storm of Swords—ends with the revealing of Lady Stoneheart. Instead, the last episode of season four ended with Arya gazing at the horizon while on a ship bound for Braavos. Not exactly thrilling material.

[GAME OF THRONES SPOILERS] How the hell do you not end on Lady Stoneheart, HBO. Perfect finale literally written for you & you PASS ON IT???

LITERALLY MAD THEY DIDN’T PUT THE BEST CLIFFHANGER ON GAME OF THRONES. #LadyStoneheart

I am baffled by the lack of Lady Stoneheart tonight. #GameOfThrones

ENDING THE SEASON WITH THE LAST 10 SECS OF IT WITH LADY STONEHEART WOULD HAVE BEEN THE BEST FINALE DO I NEED TO MAKE THE SHOW FOR YOU D&D ??

The search term is still hot on Twitter. (Outrage reached such a critical mass that entertainment sites were able to make a pretty penny off the outrage pageviews. While omitting Lady Stoneheart from this season is, as a tremendous fan of the books, I believe a grievous error, there’s a bigger problem that Stoneheart-mania is overshadowing: The Hollywood-ification of Game of Thrones.

Watch any interview with George R.R. Martin, author of A Song of Ice and Fire, and you’ll learn that he made his money as a television writer in Hollywood. One of the things he hated most was the network interfering in his stories for arbitrary purposes.

“You have the network and the studio—these two Darth Vader forces that periodically reach down and mess with your scripts and your shows and do things…and that’s frustrating,” he said in an interview. Martin’s novels aren’t subject to the trappings of Hollywood. If a popular character, say…Tyrion Lannister, does something morally reprehensible, he doesn’t have to change the story because ratings might suffer.

Game of Thrones, however, is influenced by these pressures. Let’s use a scene from the finale as an example: Tyrion killing his former lover, Shae. In the books, Tyrion murders Shae. He finds her on his father’s bed and strangles her. In the show, she attacks him with a knife before he can even say anything. This exonerates Tyrion of all guilt, since now he killed Shae in self-defense. A character who was so grey in the books he was almost black became white-washed and pristine.

Another example, this one from A Clash of Kings: When Tyrion is Hand of the King, his sister Cersei kidnaps a whore she believes is Tyrion’s lover. Even though the whore isn’t the one he’s in love with, Tyrion protects her by kidnapping Cersei’s son Tommen—Tyrion’s own nephew—and threatening that whatever Cersei does to the whore, he will do to Tommen, including rape.

That’s jaw-dropping in its brutality and makes Tyrion a much harder character to root for. But that subplot only partially appears in Game of Thrones. Yes, Cersei kidnaps a whore she thinks Tyrion is in love with, but Tyrion doesn’t retaliate in the same way. Tyrion instead becomes the poor victim the viewers root for even more. Why make Tyrion as dark and borderline evil as he is in the books when it could jeopardize his status as a fan favorite? Why sully the good name of the show’s top draw and Emmy winner?

That’s the sort of Hollywood influence that’s killing the story told in A Song of Ice and Fire, which was written as an antithesis to such nonsense.

“When you read a book or see a TV show, if you got the hero and you have the villian, one is black and one is white, and everybody responds to them the same way—oh, we like the hero, we hiss at the villain, then you’re dealing with cardboard,” Martin said in another interview. Martin’s devotion to complex characters and gritty realism is apparent if you’ve read the books.

Martin further elaborated on the greyness of his characters:

This level of nuance doesn’t apply to Game of Thrones—where the good guys have to remain good so as to not upset the television audience, where Arya and the Hound have to become a Buddy Cop duo because the audience needs comic relief in the midst of a war-torn, joyless world, where Ramsay Snow can fight without armor or even a shirt and not get an ax in the chest because it’s important to show off an attractive male’s physique, and where Jon Snow can hug and kiss his dying girlfriend in the middle of a giant battle without so much as an arrow coming his way because that’s how it’s done in Hollywood, the land that tact forgot.

David Benioff and Dan Weiss, the showrunners for Game of Thrones, are no longer telling the same story as A Song of Ice and Fire. They’re telling a cheaper, bastardized, dollar-store version of it, complete with all the loathsome tropes of Hollywood that drove George R.R. Martin to write his magnum opus in the first place.