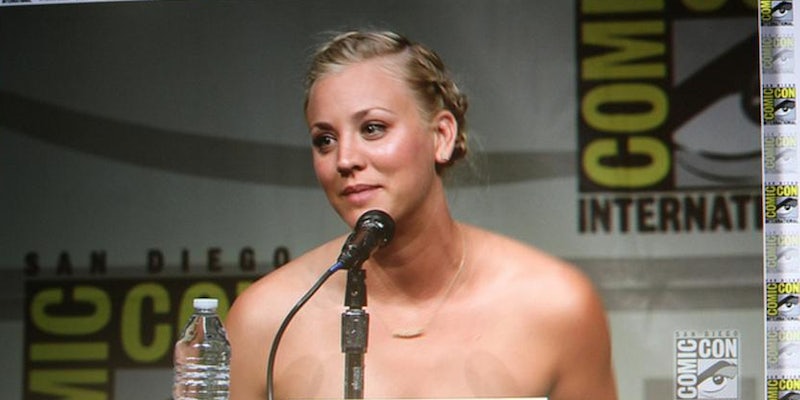 Kaley Cuoco-Sweeting explains why she isn't a feminist. I disagree with her argument, but I support her right to self-identify.

If you’re a woman and you want to make feminists angry, here’s a hot tip: Tell everyone you’re not a feminist. That’s what Big Bang Theory star Kaley Cuoco-Sweeting learned during an interview with Redbook magazine, when asked if she considered herself a feminist:

Is it bad if I say no? It’s not really something I think about. Things are different now, and I know a lot of the work that paved the way for women happened before I was around … I was never that feminist girl demanding equality, but maybe that’s because I’ve never really faced inequality.

Cuoco-Sweeting went on to say she “[likes] the idea of women taking care of their men,” boasting about staying at home and cooking dinner for her musician husband, Ryan, five nights a week. She also talked about her choice to get breast implants at age 18, while she was shooting the series 8 Simple Rules for Dating My Teenage Daughter, calling it “the best decision I’ve ever made.”

Were I so inclined, it would be easy to go through Cuoco’s statement, sentence by sentence, and point out the numerous ways in which it is, for lack of a better word, stupid.

We could talk about how, in 2014, the average American woman—by which we mean, a woman who is not paid $1 million per episode for pretending to be a fictional person on TV—makes 77 percent of what the average American man makes. We could talk about rape culture—how women spend the vast majority of their lives living in terror of sexual assault and how, for approximately one in five women, this fear becomes a reality. We could also talk about how, as someone who is best known for playing a role that is a more one-dimensional version of a Betty Boop cardboard cutout, Cuoco-Sweeting is herself a product of institutionalized sexism and oppression, whether she acknowledges it or not, and that she’ll no longer be a recipient of the benefits of this system when she hits her mid-thirties and her career prospects start to dry up.

But I’m not going to trot out these arguments, in part because people on Twitter are already doing so for me. Instead, let’s take Cuoco’s statement at face value and talk about how it highlights one of the most uncomfortable truths about being a feminist in the 21st century: that an important part of being a feminist is granting other women the right to say they are not one.

It’s a tough thing for most women to acknowledge, particularly in light of how widely accepted—nay, even fashionable—calling yourself a feminist has become in the past few years. In 2014 alone, Emma Watson, Taylor Swift, and Beyoncé have gone on record aligning themselves with the “F-word,” with the latter literally dancing in front of a giant gold “feminist” sign during the VMAs. 2014 was, as Quartz put it in a headline, “the year that turned feminism into a brand.”

Given how de rigeur it has become for women to call themselves feminists, it’s widely considered a broach against good taste when a woman publicly declares herself not one. When Shailene Woodley, for instance, told Time that she wasn’t a feminist because she “loved men,” feminists on the Internet immediately dog-piled on top of her, calling her an idiot and trying to prove her wrong. “Of course she’s a feminist!” people were saying. “She plays badass lady roles, and she has short hair! She doesn’t know what she’s talking about.”

Like her detractors, I disagreed with Woodley’s statement, and I thought it was dumb. (Though I wondered why anyone was particularly surprised that a woman who admits to eating clay on the regular isn’t an intellectual giant.) But I was more upset that so many ostensible feminists were trying to prove Woodley wrong—and that she was, in fact, one of theirs. I’d go so far as to say that getting mad when a woman says she’s not a feminist is anti-feminist. Because when it comes down to it, I can’t think of anything less feminist than telling a woman she’s wrong about her own lived experience and that she doesn’t know what she’s talking about.

That said, as a feminist, it’s hard to stand by and watch people you respect and admire shrink from the label. I have an acquaintance in the adult industry, for instance, who is a female director, and whose work contains themes and content that are strongly pro-woman. I would call her a feminist, but she does not self-identify as such. I think she has many reasons for this—for instance, she doesn’t want to perpetuate the idea that her work is inherently political, or that it caters to a gender-specific audience—but they’re all ultimately irrelevant. She doesn’t think of herself as a feminist, so she isn’t one.

The truth is that being a feminist is as simple as calling yourself one. If a woman gets breast implants and becomes an exotic dancer at a gentlemen’s club, she’s a feminist if she says so, regardless of what you might think about sex work and the patriarchy. If a woman quits her high-powered investment banking job to raise her kids and volunteer for the PTA, she gets to say if she’s a feminist, regardless of what you might think about stay-at-home moms. Feminism is not a club that requires an application for membership. You gain entry by simply by taking on the label, whether it’s in your words or your actions or by dancing in front of a giant gold “FEMINIST” sign on an awards show.

But feminists need to understand that the converse also applies. If a woman chooses not to self-identify as feminist, that is her choice and we should respect it as such. We might critique her reasons, and we might even think they’re stupid. However, we can’t bully her into joining the fray. All we can do is respect her right to make her own choices, because that is the right that we have spent centuries fighting for.

Kaley Cuoco-Sweeting says she is not a feminist because women no longer face oppression. As a woman who faces oppression every single day, albeit in subtle, minor forms—in the cashier who calls me “sweetheart,” in the drunk dude at the bar who can’t take a hint, in the tweets and comments I get telling me I should be raped—I disagree with her, and in light of this shameful year of campus sexual assaults and rape victim doxxxers and nude photo hacks, I think the world needs feminism more than ever. But as a feminist, I will also fight for Kaley Cuoco’s right to say otherwise.