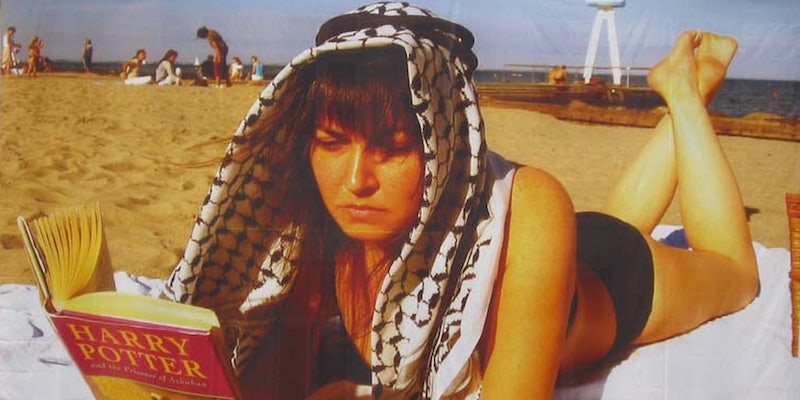 'Harry Potter' isn't just for non-Christians. J.K. Rowling's work is for everyone.

Harry Potter isn’t going away anytime soon. With the Internet’s intensely persistent fandom for J.K. Rowling’s series, along with a spin-off film currently in development and recent short fiction from the author herself, it’s safe to say that the boy wizard’s presence in pop culture is as bright as ever. That’s why it’s so weird to hear a story about someone who seems to have missed the boat on Potter entirely.

It was reported this week that an evangelical mother named Grace Ann, aka proudhousewife, posted a “Christian” rewrite of the first Potter book on FanFiction.net, as an alternative for her children who had been asking to read the series. In Grace Ann’s version of the story, all elements of magic have been completely erased, and young Mr. Potter now attends “Hogwarts School of Prayer and Miracles.”

Suffice it to say, Grace Ann’s take here is pretty absurd. To call her an amateur writer is a disservice to amateur writers everywhere. As far as linguistically impressive fan fiction goes, she makes EL James look like Shakespeare. Although given Grace Ann’s ultra-conservative views, she’s probably never heard of E.L. James, and if she has, it was probably in reference to book-burning.

Her version of the story is so retrograde, that a scene in which Harry is supposedly sticking up for Hermione reads, “‘Women shouldn’t not have careers because women are stupid!’ Harry shouted indignantly. ‘Women are not stupid at all! Women should not have careers because women are nurturing and loving and their gifts serve them best in the home!’”

Yes, you may vomit now.

But the really odd thing is not only how disconnected Grace Ann is from the Potter series, but how her interpretation of it as a Christian also comes up lacking. Because in the 17 years since Harry Potter first reared his magical head, the saga’s relationship to Christianity has changed dramatically.

Obviously, Harry Potter has always summoned strong reactions from religious people, especially Christians. The conversation has been intense, and often heated. There’s a whole Wikipedia page on “religious debates over the Harry Potter series” that exists in illustration of this. And Grace Ann would hardly be the first to express concern that the books’ use of magic sends an unholy message about the occult. Pope Benedict himself condemned the series, before he ascended to the papacy.

So to say that Harry Potter and Christianity don’t get along would be true, except that for the past few years, Christians have rarely uttered a peep about the series, negative or otherwise. When Rowling outed Dumbledore in 2007, there were a few who once again got upset, although even some of these Christians came around, in their own limited way. Moreover, said Christians aren’t that different from your average run of the mill trolls who have a problem with Dumbledore’s gayness for other inane reasons.

Recent years have seen a kind of truce occur between Christians and Harry Potter. And beyond that, many have actually come to cherish the books. “Christians today are certainly not universally enchanted by the series,” states Sarah Pulliam Bailey of the Wall Street Journal in 2011, who goes on to observe, “Over time, however, more readers have begun to express praise for its honest depiction of fear, loneliness and sacrifice as Harry faces the evil wizard Lord Voldemort. Many Christians have cheered the portrayals of loyalty, courage and love, as the main character repeatedly risks his life.”

Then there are Christians who have been insisting for some time now that they don’t actually have a problem with the books, and that those who do are not representative of the larger Christian community.

All the way back in 1999, Christianity Today’s Ted Olson wrote, “Here’s the problem with painting with such a broad brush: It’s just not true. In fact, as far as I can tell, while no major Christian leader has come out to condemn J.K. Rowling’s series, many have given it the thumbs-up. If our readers know of any major Christian leader who has actually told Christians not to read the books, I’d be happy to know about it; but in my research, even those Christians known for criticizing all that is popular culture have been pretty positive about Potter.”

But the final blow to the notion that Harry Potter is anti-Christian came from Rowling herself, who elaborated on the series’ kinship with Christianity around the release of Harry Potter and the Deathly Hallows. Rowling, who belongs to the Church of Scotland, has stated that Hogwarts is a “multi-faith” school, but according to her, she was never trying to hide the books’ inherent spiritual undertones. “To me, the religious parallels have always been obvious,” said Rowling. “But I never wanted to talk too openly about it because I thought it might show people who just wanted the story where we were going.”

These parallels became undeniably evident in Deathly Hallows, when a trip to Godric’s Hollow reveals a quote on Harry’s parents’ tombstone from 1 Corinthians 15:26, reading, “The last enemy that shall be destroyed is death.” And another tombstone, belonging to Dumbledore’s mother and sister, displays the passage from Matthew 6:19, “Where your treasure is, there will your heart be also.” Rowling has gone on to say, “I think those two particular quotations he finds on the tombstones at Godric’s Hollow, they sum up…they almost epitomize the whole series.”

In this light, the evidence that Harry Potter is Christian-friendly is almost overwhelming. Which should have made sense, to anyone who was paying attention.

“It deals extensively with souls—about keeping them whole and the evil required to split them in two,” declared MTV’s Shawn Adler, talking about the series in 2007. “After one hero falls beyond the veil of life, his whispers are still heard. It starts with the premise that love can save you from death and ends with a proclamation that a sacrifice in the name of love can bring you back from it… Indeed, at its most simplistic, Harry’s final tale can in some respects be boiled down to a resurrection story, with Harry venturing to a heavenly way station of sorts after getting hit with a killing curse in Chapter 35, only to shortly return.”

With all that in mind, some have wondered whether, in 2014, Grace Ann’s take on Harry Potter can be anything more than a hoax. Admitting that some Christians have a reputation for being less than kind, Laura Turner of Religious News Service reacted skeptically to the incident.

I’m sure the whole thing is satire… I could be wrong, but if the Internet has taught me anything, it is to never take anything for granted. Proudhousewife may really be Grace Ann Parsons, witchcraft-avoiding mother and devout Christian woman. But more likely, she is some dude (they’re always dudes) with a little too much time on his hands and an axe to grind against the evangelical subculture.

We—and I am chief among this crowd—are so quick to believe the worst about Christianity. And there are good reasons to do so. Many, it seems, have made a bad name for themselves and for our little band of weirdos… But that’s not the whole story, and as a Christian, I need to be more gracious, more patient, in my responses–because my bent will always be toward criticism.

Other Christians would be wise to follow Turner’s lead when it comes to criticism. Resisting Harry Potter is a sanctimonious act for almost anyone at this point, but there are surely still Christians out there who feel particularly resistant to embracing the series.

However, any Christian who is also a non-crazy person, who doesn’t go around preaching hellfire and damnation, should also be able to acknowledge that Harry Potter ostensibly teaches the same core tenants that makes Christianity so widely practiced in the first place. Kindness, fellowship, unity—it’s all there.

A study released in July showed that people who read Harry Potter eventually became less prejudiced and more open-minded. That’s right, reading Harry Potter literally makes you a better person. And since Rowling has called the story “a prolonged plea for an end to bigotry,” a more appropriate legacy the books could not leave. You might not even like them, but it would be hard for any rational thinking person to argue that that’s a pretty good end result.

And this is why, assuming Grace Ann is a real person, her resistance to Harry Potter is so sad. That her children had a desire to read in the first place is a wonderful thing. But that they had a chance to read something which could actually improve their character, and that their mother would deprive them of that, is a miniature tragedy.

If she’s out there, hopefully Grace Ann will realize one day that Harry Potter has the power to impact lives for the better, and that taking these books away from her children doesn’t just make her a poor Christian, it makes her a poor human being.

Photo via giuliaduepuntozero/Flickr (CC BY N.D.-2.0)