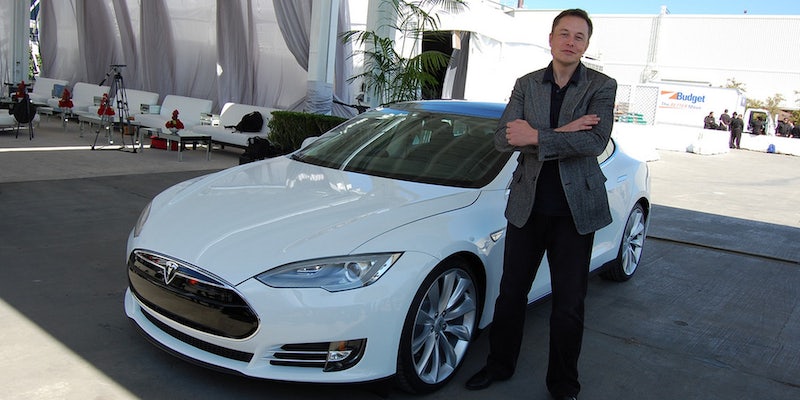 For real executive compensation reform, you're going to have to do a little better than this.

Elon Musk’s salary in 2014 basically amounted to minimum wage—and he didn’t even take it, leaving his $35,360 on the table. He joins a growing list of CEOs who’ve opted for minimum wage equivalent—or even lower—salaries, sparking conversations about executive pay inequalities and their financial sacrifices. However, walking away from their salaries is hardly addressing class problems in the United States; it’s just obscuring the problems with CEO compensation.

The practice is particularly common in the tech industry, which is not coincidentally also one of the most profitable in the U.S. Larry Ellison, Sergey Brin, Meg Whitman, Mark Zuckerberg, and Larry Page are among the ranks of those earning just $1 annually. For them, those dollars, or $35,360, are chump change when compared with other forms of executive compensation. Taking low pay doesn’t mean a CEO is making a personal financial sacrifice, but it does provide an awfully nice story for PR.

Salary is only one aspect of CEO compensation, and it’s often only a small component. In addition to negotiated salaries, CEOs are typically also eligible for cash bonuses, which are not treated in the same way. They also accept a large percentage of their compensation in stock and options. Additionally, many take advantage of high speaking fees, major book deals, and, of course, benefits like excellent health care packages and access to corporate jets and other resources.

Thus, to say that a CEO is “earning” only $35,360 annually is rather a stretch. Musk is worth nearly $8 billion already, including the annual compensation of other forms he receives from Tesla Motors. Whitman, who officially earns $1 from Hewlett-Packarg, took home $15.4 million in pay in 2012. That same year, Ellison drew $96.2 million. Those accepting symbolic salaries have wealth that earns for them, including large portfolios of stocks and other financial products directly tied to the companies they own or run. Sergey Brin, for example, is clearly getting by on much more than $1 annually.

John Cassidy at the New Yorker explains the issue in detail:

Over time, they and other rich people earn a lot of money from the capital they have accumulated: It comes in the form of dividends, capital gains, interest payments, profits from private businesses, and rents. Income from capital has always played a key role in capitalism. [French economist Thomas Piketty] claims that its role is growing even larger, and that this helps explain why inequality is rising so fast.

The pay gap when it comes to CEO compensation versus that of ordinary workers is particularly extreme in the U.S., where executives earn $354 to every one dollar earned by those in other lines of work. No other nation in the world has an inequality gap so extreme—the nation just behind the U.S. in terms of pay inequality is Switzerland, where CEOs take home $148 to every dollar pocketed by the average Swiss citizen. This wasn’t always the case: Until 1990, the ratio of CEO-to-worker pay was much more reasonable, at which point executive pay took a dramatic spike. It faltered briefly at the height of the recession, when options and stocks took a hit, but is firmly in recovery today.

The practice of taking a symbolically low salary appears to originate in World War II, when the United States was whipped into a nationalist fervor. Corporations across the country vied to present themselves as the most patriotic, leading some executives to slash their salaries in the name of the war effort. Regulations prohibit eliminating a salary altogether, hence the token dollar take home pay, which makes for a great headline. During the height of the recession, Chrysler CEO Lee Iacocca tok advantage of that by accepting one dollar in salary as a token gesture to the company’s dire straits.

The “$1 challenge” makes for absolutely fantastic PR, especially in an era when many Americans are frustrated with financial inequality and see CEO compensation as a striking target. When a CEO takes on the challenge, it generates reams of good press, allowing a company to position itself as socially responsible and aware of the country’s uneven economic situation. It’s also a down home, folksy approach that can appeal internally as well—it’s harder to resent a CEO who earns just a single dollar.

It’s not just cynical from a PR perspective, though. As Robert B. Wood points out at Forbes, it’s also an intelligent tax move. Taxes on capital gains and investments are much lower than those on income, creating an active incentive for CEOs to avoid earning salaries. As Warren Buffett has famously noted, the tax system favors those like him—he estimates that his secretary’s tax rate is likely higher than his own.

Joseph Stiglitz commented this week that reforming the U.S. tax system is a critical component of any plan to address income inequality. He targeted the Reagan era as a particularly damaging period in economic history, and it’s striking to see the correlation between Reagan’s tax reforms and the sudden spike in income inequality. We must “reform our tax and transfer system,” Stiglitz said in an interview with Andy Serwer of Yahoo Finance, “to make it at least fair.”

If anything, the $1 Club aren’t evidence of selfless CEOs tackling social inequality: They’re further evidence of the problems with the American financial system. Wealthier Americans like them have the capacity to hide and shift income to lower their tax burden, while those earning straight wages and salaries do not. By refusing salaries in preference for stocks, options, and the vague “other” compensation, CEOs are actually taking home more money annually than they would have if they’d retained their high pay.

“Despite the lack of nuance, today’s debate over inequality will have important consequences,” warns Zanny Minton Beddoes at the Economist. Obscuring the picture with dramatic PR opportunities makes it challenging to take on the truth.

Given the real story behind executive compensation, it’s extremely disingenuous to claim that taking symbolic low pay is fighting pay inequality in any meaningful way. The issue isn’t CEO salaries but overall compensation, and this is what the government needs to tackle if it wants to take on pay inequality, which it’s shown signs of doing. The IRS is already much more vigilant when it comes to common CEO tax evasion tactics, and Congress is under growing pressure to compel corporations and their executives to pay their share of the American tax burden.

We shouldn’t be giving Musk and his ilk credit for a move that’s transparently designed to protect them and make their businesses look good—rewarding selfish behavior may be the American way, but it certainly won’t address the serious social problems that come with income inequality. For every American to have an equal chance at class mobility and financial success, it’s necessary to take a hard look at how much the labor of CEOs is truly worth. Perhaps a CEO’s time really is that much more valuable than that of a worker—proponents of the free market certainly think so—but if it’s not, than Americans need to decide how they want to tackle the issue.

The tech industry, where the $1 Club is particularly outspoken and active, might be a good place to start. As tech companies position themselves as those empowered with the solutions to help create positive change in the world, perhaps they’re the ones who should be developing an unbiased algorithm for determining pay. Labor, training, contributions, and longevity with a company could be integrated into a balanced rubric, modeling compensation in the open market on that of government agencies and eliminating the ambiguity and unfairness from the equation.