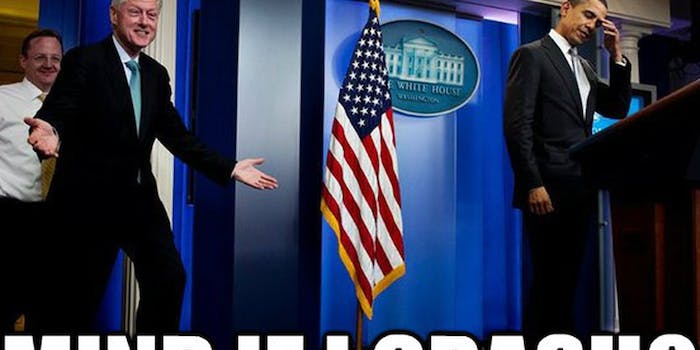 On the open-sourced Web, we all can be Anonymous and masters of our own domains.

You know one of the coolest things about the Internet? Anyone can do it.

Last week Hillary Clinton found Web fame as the star of “Texts from Hillary,” a meme that came and went in a single glorious week. Not to be outdone, husband and former President Bill Clinton recently surfaced in a new meme based on an image of him crashing a press conference two years ago. Clinton’s doing a “ta-da” move and sitting president, Barack Obama, is doing a “didn’t-I-have-enough-to-deal-with-today-already” face at the podium.

Unlike Texts from Hillary, the Clinton macro is less “all in good fun” and a lot more … cutting, primarily relying on sexist and racist jokes (often at the same time). Texts from Hillary was the result of a single Tumblr, while the Clinton meme is coming from users at random. And I can’t help but wonder if that’s part of the reason for the difference.

But if Bill’s bordering on the offensive, Texts from Drone is downright edgy. It features a bomb-carrying unmanned flying vehicle engaged in disturbing repartée with various partners. In one instance, a group of tween girls texts to say they’re visiting family in Yemen, and the drone responds: “LOL BOOM.” The Tumblr makes you laugh at times—but uncomfortably.

Rugnetta points out that whatever they are, the beauty of memes is that anyone can get involved.

Across the Internet the “open door” and participatory nature of the community is obvious in all sorts of ways.

Over at Pinterest, the social network is recruiting users to officially report spam and users are self-organizing into watchdog groups.

At Kickstarter, anyone can suggest an idea, whether it’s hooking your watch—or an aluminum can—up to your iPhone or shooting a firefighter calendar featuring, well, any old (or chubby) firefighter. In turn, anyone, not just angel investors and VCs, can help fund it.

At Wikipedia, one person, Eric, known as eposty online, has become the steward of Major League Baseball, simply for the love of the game and a love of numbers. He’s self-appointed, even accidental, but why does he do it? “I figure this is my little way to help out the online community,” he said.

Protest and political action are similarly open—Anonymous, which made Time’s 100 list of the most influential people in the world, is radically open. There are no membership rolls, no cards to carry; you are Anonymous if you believe you are Anonymous. Groups of protest organizers with no particular hacking skills, such as CabinCr3w, can appear simply by asserting their being and then dissolve back into the collective at will.

What’s remarkable about Anonymous is how truly anyone can take part. It is a true collective—a leaderless movement. There have been plenty of so-called collectives in history, from radical political groups in the ’60s to the communist regimes of the U.S.S.R., the Eastern Bloc, China, and Latin and South America. Are they ever actually a collectivist? No, they’re, like 1984, command-and-control in the name of the collective.

When it comes to collectives, we’ve been let down by old, IRL models. Online is truly the first place on earth that leaderlessness has existed—that true “collectivity” has been achieved on such a scale.

Who knows if we’ll sustain it? Who knows if it’s even an entirely good thing? But there is a nobility in it. Sure there’s trolling and nastiness, but there’s also the opportunity to debate the true nature of art, to share experiences through everything from tweets to image macros. Heck, there’s even the opportunity to live a few minutes in the life of a sick little boy whose dream is to fight crime as Batman—and whose dream comes true.

We should be suspicious of the collective, absolutely. It can go too far. But as each passing year it becomes more obvious how small, how interdependent our real-world really is, we need a place where we can so profoundly experience one simple truth: We are all in this together.