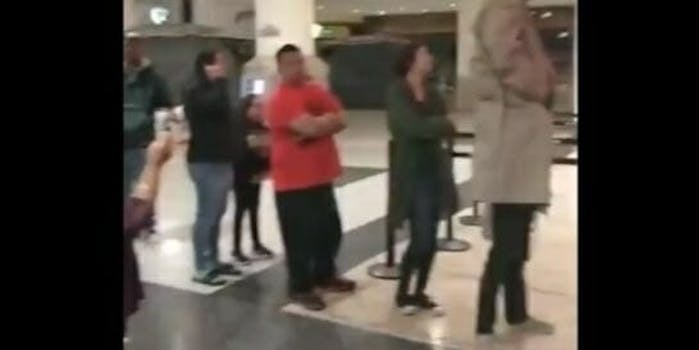 Businesses, churches, and student groups bought thousands of tickets to see Black Panther this weekend, many with the intention of taking underprivileged kids to see a superhero movie with a predominantly Black cast and Black director. One movie theater employee, however, was not feeling quite as charitable, as he shut down two patrons’ hilarious attempt to get a two-for-one discount to see the film.

Twitter user @stevelikescups documented his efforts to smuggle his friend into Black Panther, employing the classic “totem pole trench” diversion to sneak past an unassuming box office employee. Unfortunately, this particular worker proved too smart for their ruse and insisted the patron hop off his partner’s shoulders before helping him. (The crowd of giggling onlookers probably didn’t help his odds.)

We tried getting the two for one special at black panther. The manager was not having it. pic.twitter.com/Ktqsuh7s3m

So, @stevelikescups might have failed to swindle the movie theater out of $12, but his original tweet has garnered 300,000 likes and 125,000 retweets, so he’s still the real winner here.