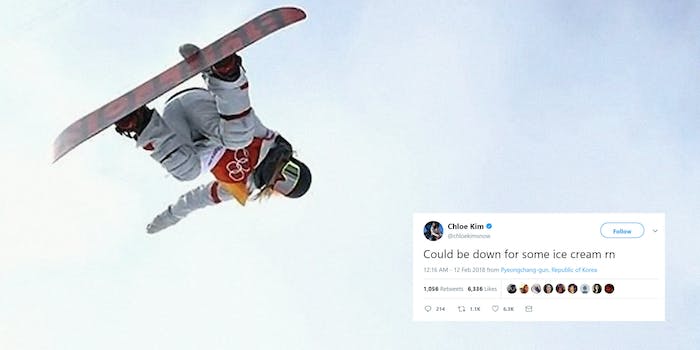 An Olympian we can all look up to.

Do you ever crave dessert in the middle of your workday? What if your “workday” was snowboarding at the Winter Olympics in Pyeongchang? Chloe Kim, a 17-year-old Californian, tweeted about wanting ice cream during a qualifying halfpipe event on Monday.

Could be down for some ice cream rn

One fan asked if Kim was tweeting while competing. She replied “yes…” as if to say, “yeah, so what?”

Although Kim is clearly talented, she likely wasn’t snowboarding and tweeting at the same time. She probably sent the tweet while waiting her turn to compete. But the internet found Kim’s tweet funny and relatable.

finally i can relate to an olympian https://t.co/dMuNjypijT

if chloe kim can tweet about ice cream while casually doing 90+ olympic runs I can go to work tomorrow https://t.co/dxMDZf5zig

update: this is now a chloe kim fan account pic.twitter.com/meK7xSm5IM

NBC even conducted a Twitter poll about what kind of ice cream Kim should eat. Cookies and cream took the gold, which Kim replied is “some good stuff.”

Cookies & Cream is some good stuff. If anyone can get me some to the village thatd be dope

We hope someone buys her ice cream to celebrate. She’d probably also accept a churro.