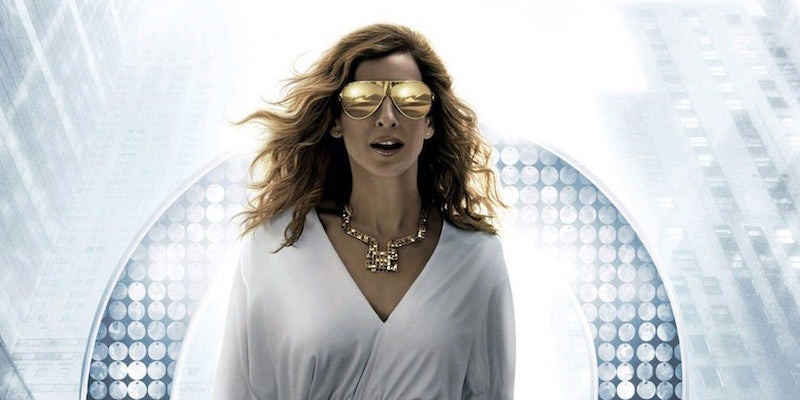 Sex and the City's central heroine is the most disliked female character on the Internet. Maybe that says more about us than it does Carrie.

My best friend, Cathy, has a theory about women who grew up watching Sex and the City: We all grow up hating Miranda, but then, “in a cruel, M. Night Shyamalan-level twist, we all grow up to be exactly like her.” I agree with this theory to an extent, with one addendum: I think the same thing happens, but with Carrie, the neurotic, big-haired, harem pants-wearing sex columnist played by Sarah Jessica Parker.

One of the things I tell people is that he never tried to pretend he was anything other than what he was. It was [Carrie] who tried to pretend he was something he wasn’t. He was always honest about himself—he never cheated on her. The relationship just didn’t work, and he went on to get married while she went on to… How many boyfriends did she have? She was such a whore! [laughs] There’s a misconception that Carrie was a victim of him, and that’s not the case—she was a strong, smart woman.

It was a dumb and misogynistic statement, to be sure, and to Sex and the City fans it came off a bit like Noth was biting the hand that fed him. (“How dare he forsake her? She made him,” Cathy incredulously put it, though I’m not sure if she was referring to Parker and Noth themselves or to their characters.) But it was not surprising, nor was it unprecedented. Since the show went off the air nearly 10 years ago, fans have been hating on Carrie Bradshaw to the point where, in a 2013 essay for the New Yorker, writer Emily Nussbaum referred to her as “the first female anti-hero on television,” on the same level as Tony Soprano or Al Swearengen or Walter White.

It’s not difficult to find examples of this anti-Carrie sentiment on the web: Carrie is “the actual worst,” crows Total Sorority Move. She’s “the kind of impossibly self-absorbed, cutesy, un-self-aware woman whose view of the world—and her place in it—hasn’t changed since she was maybe 15,” wrote Anna Breslaw in Cosmopolitan.  And in an op-ed for the Gloss from 2010, Amanda Chatel argued that Carrie was “a horrible role model for women the world over” and that the character “sort of set women back.”

To recap: Walter White sold meth. Tony Soprano strangled a man in cold blood. Carrie Bradshaw slept around, bought lots of shoes, and maybe used the first-person a little too much for people’s liking. Also, she wore really ill-advised du-rags occasionally. But I have yet to see anyone argue that Bryan Cranston or James Gandolfini “set men back.” Anyone still want to argue that culturally entrenched sexism is no longer a thing?

As a Miranda, it feels a little weird and against my best interest to speak out against sexism in Carrie’s defense. It kind of feels like getting offered a raise and then being like, “Thanks, but why don’t you give it to my co-worker over there instead?” That said, Noth’s comments really rubbed me the wrong way, and I feel compelled to jump in and rescue Carrie while her Patricia Field tutu is being raked through the coals. Here are some of the most common complaints against Carrie—with some reasons why I think all of these arguments are more flawed than her character.

This is probably the most oft-cited argument against Carrie, and the one that’s most difficult to disprove. To the extent that you could say one of the four incredibly self-involved heroines on SATC was the most selfish, Carrie was hands-down the worst; hell, there’s even an entire episode about how she had to get a psychiatrist because her friends couldn’t stand her constantly whining about her breakup.

But I’d argue that her selfishness is what makes her the most well-developed character on the show. This is not because it makes her more flawed and “relatable,” per se. (If flaws made a character more “relatable,” then I’d want to grab a beer with Marnie Michaels on Girls, instead of constantly struggling not to punch through the TV when Allison Williams’ skincare commercials come on.) It’s because the quality we interpret as selfishness—the constant interior monologues, the over-reliance on the first-person—is actually an extended peek at her inner life.

If Carrie weren’t so self-involved, we wouldn’t know nearly as much about her as we do: her abortion, the fact that she lost her virginity on a pool table at age 17, her fear of clowns. It’s a mistake on the viewer’s part to view her self-involvement as a grating character flaw, when in fact it’s just indicative of really good writing.

It might seem contradictory to list the worst examples of Carrie’s wordplay on the show, right on the heels of talking about how good the writing was, but here goes: “From Jewish to poo-ish.” “If you’re tired, you take a nap-a, you don’t move to Napa.” And so on and so forth. SATC fans are all familiar with these gems, and if we have half a brain, we probably consider them among the most embarrassing aspects of the show. It’s also commonly cited by SATC detractors as evidence of Carrie’s lack of writing ability, which makes it all the less convincing that she has a celebrated authorial career.

To which I would say: Yes, Carrie is a terrible writer. Yes, her puns are embarrassing and exhausting. Yes, if she existed IRL, she’d probably be working for Hello Giggles and her column would get torn apart by Gawker on a near-daily basis. But that’s kind of the point, isn’t it? This is a woman who, by all accounts, spent her 20s club-hopping and sleeping with a panoply of unavailable men; when you spend that much time at Tunnel in the ’80s, it’s kind of difficult to focus on building your career and developing your writing abilities. (Also, notice the show never explicitly references her writing abilities, or lack thereof, as the case might be.)

Writing is hard work; in order to do it well, you have to give up brunches and gallery openings and cocktail parties every once in a while, and spend a few hours hunkering down at your keyboard. Given how often we see Carrie doing the former, and how little we see her doing the latter, it makes total sense that the character wouldn’t exactly be Dorothy Parker.

One of the things that’s happened to Sex and the City’s reputation over the past few years is that people have argued that the show was anti-feminist, in that it focused far less on the interpersonal relationships and more on glitzy shoes, bags, and hats. A lot of this critique stems from the movies’ inordinate focus on brand names and consumer culture (hell, one of the songs off the first film’s soundtrack is called “Labels or Love”), which is totally fair. Often, these arguments center on Carrie, who (with her love for expensive footwear and ridiculous $600 hats) is arguably symbolic of the show’s espousal of consumerism.

But whenever I meet people who say they hate the show because it represented an unrealistic, glamorized view of New York City and emphasized fashion fetishism over pathos and real emotions, I basically just tune out. Yes, the show is an unrealistic depiction of the economics of living in New York City; yes, it’s somewhat unlikely that Carrie could afford Manolo Blahniks and a spacious Upper East Side apartment on a newspaper columnist’s salary. But it’s a TV show. She is a television character. Does anyone watch Game of Thrones and complain that because the Lannisters are having money problems, they couldn’t afford to have an open bar at the Purple Wedding? No, they do not.

I’m being somewhat glib here, but the truth is that the show does acknowledge Carrie’s financial issues, on multiple occasions; there’s an entire episode devoted to her inability to manage her purse strings. (At one point, she admits to buying Vogue instead of eating, which is one of the most ludicrous yet oddly poignant moments on the show.) Furthermore, anyone who has seen a few episodes of Sex and the City knows the shoes and bags and clothes and tutus were always secondary to the focal point of the show, which was these women and their relationships with men and each other.

4) She’s anti-feminist and a bad friend

For most anti-Carrieites, these two critiques go hand-in-hand: If the show was such a landmark celebration of female relationships, they argue, why was Carrie so dependent on the men in her life for emotional validation? Why did she keep going back to Big, despite her friends’ exhortations not to? And when her friends came to her with real problems—for instance, when Samantha was undergoing chemotherapy for breast cancer—why did Carrie invariably use them as a launchpad to bitch about herself and her own relationships, like when she talked about Aleksander Petrovsky while Sam was literally getting high doses of chemo pumped into her veins?

Sure, Carrie’s need to see herself and her relationships with the men in her life as the still point of the turning world isn’t particularly charming. But being a neurotic, silly, kinda selfish person while still believing in the redemptive powers of work and sex and love and, above all else, your female friendships—because ultimately, that’s what so many women love about the show—doesn’t make you a bad feminist, or a bad example to womankind. It makes you a work in progress, just like the rest of us.

In every social circle, there’s always that one person like Carrie, who is biologically incapable of viewing any conversation outside the prism of his or her own experience. That person is difficult, and occasionally impossible, to deal with at times. But because of their other positive traits—the fact that they bring you mint tea after your miscarriage, as Carrie does with Charlotte in the last season, or that they walk you down the aisle at your mother’s funeral, as she does with Miranda—you can overlook their solipsism. After a while, you might even come to see it as a quirky, even endearing trait, like their love of Disney Channel movies or their overreliance on emoji while texting.

Because while being a good friend has a lot to do with seeing the forest through the trees and being clear-headed about your own problems and others, there’s a lot more to it than that. Much like success in every other arena of life, 90 percent of being a good friend is just showing up. A lot of people fail even that basic requirement, especially as they get older and start having kids, or prioritizing their career over their friendships.

Maybe it’s true that we all grow up hating Carrie, and then, in a cruel M. Night Shyamalan-level twist, ultimately become her. But you know what? Maybe that’s not such a bad thing.