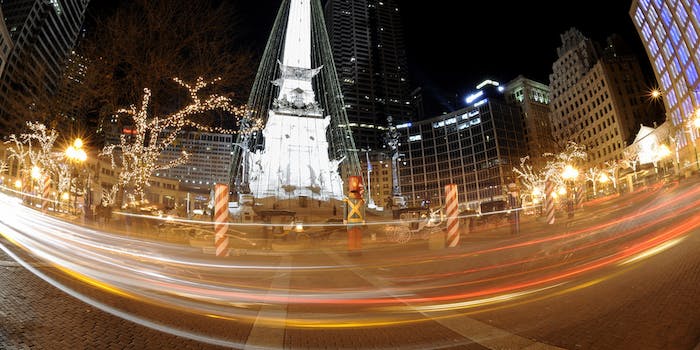 I learned firsthand that love comes from unexpected places when I fell in love in Indiana.

Two years ago, my partner and I had a perfect meet-cute in the elevator at the Kinsey Institute for Research in Sex, Gender, and Reproduction in Bloomington. I was the John Money Fellow at the time, she was a visiting researcher, and with all that sex on our brains, it was hard not to form a connection right away. In true lesbian fashion, we moved in together the day we met—for the rest of our summer in Indiana, at least.

So when Indiana Governor Mike Pence signed the state’s controversial Religious Freedom Restoration Act (RFRA) into law last week, I instantly thought of my magical gay summer in Bloomington and the LGBT Hoosiers who looked after us.

Indiana’s RFRA—also known as SB101—holds that the state cannot “substantially burden a person’s exercise of religion.” The law has been widely interpreted as granting business owners the legal authority to deny service to LGBT customers.

In response to this perceived threat of discrimination, calls to Boycott Indiana have reached fever pitch. Late last week, Star Trek star George Takei called SB 101 a “terrible blight” on the state of Indiana and gave the #BoycottIndiana hashtag a substantial push on Twitter. A major Indianapolis gaming convention called Gen Con strongly suggested the might leave the state.

Salesforce CEO Marc Benioff announced the discontinuation of programs that would require employee travel to the state. His announcement was quickly followed up with some stern Silicon Valley finger-wagging from the CEOs of Apple and Yelp.

Governments are jumping on the Indiana boycott bandwagon as well. The mayors of Seattle and San Francisco have announced that they plan to ban city-funded travel to Indiana in order to punish Pence for signing the bill. The governor of Connecticut is also poised to sign a similar executive order soon.

Even Angie’s List is laying down the law by canceling a $40 million expansion of their Indianapolis headquarters.

But there’s a big problem with boycotting Indiana: LGBT people still live there. The best way to help LGBT Hoosiers is to boycott the businesses that do choose to discriminate against them and to actively support those that don’t. Issuing a death blow to the state economy while LGBT people cope with the potential discriminatory effects of SB101 is about as sound of a strategy as demolishing a house over a few pests.

Bloomington alone is home to a thriving community of LGBT-friendly businesses that would likely feel the residual effects of a large-scale boycott. There’s Rachael’s Cafe, a coffeehouse and eatery owned by the transgender woman who bears its name. One day while my partner and I were having lunch at Rachael’s, she recommended some nearby nature trails. When we told her that we didn’t pack hiking shoes for the summer, she lent us hers without giving it a second thought.

There’s the cheekily-named Back Door, a gay bar that has zebra print wallpaper and a disco ball just in case you ever forget you’re in a gay bar. Fittingly, the main entrance to the Back Door is a literal back door in an alleyway behind another, much straighter bar. On weekends, the alleyway fills up with LGBT Hoosiers smoking and eating food truck treats.

And there’s Boxcar Books, where my partner and I watched some godawful ’90s lesbian movie on a projector in the parking lot with a dozen other gay people on a warm Indiana night.

I’m glad that Marc Benioff, Tim Cook, and other corporate heavy hitters are taking a bold stance against anti-LGBT discrimination, but their tactics are too sweeping and the LGBT Hoosiers I met will undoubtedly be caught in the crossfire. I want Pence and the Indiana GOP to feel the consequences of their poor decision making, but I also hate the thought of, say, Rachael having an off year because her entire state is suffering under a boycott.

A targeted act of discrimination like SB101 requires a targeted response.

Draining millions of dollars out of Indiana by canceling conventions, cutting all business ties, and halting interstate travel works well as a symbolic gesture but—on the ground—these strategies will disproportionately hurt LGBT people who already experience poverty at a much higher rate than their straight and non-transgender counterparts.

And if we wait long enough, the right targets for boycotting will make themselves clear. Some Indiana citizens are already claiming to take advantage of the new RFRA. One man reportedly called a local radio station saying that he has previously turned LGBT people away from his restaurant; as an excuse to get them to leave, he told them “that equipment was broken in his restaurant and he couldn’t serve them even though it wasn’t and other people were already eating at the table.”

The best strategy to fight SB101 is to identify those businesses who turn people away at the door and boycott them out of Indiana rather than boycotting Indiana itself into the backwater. As Saturday Night Live’s Colin Jost put it this weekend, “You’ll be able to tell which stores are supporting the new law because they’ll have these helpful little signs.”

A targeted act of discrimination like SB101 requires a targeted response.

Conversely, corporate boycotters like Benioff could spend their energy forming deliberate and well-publicized ties with inclusive businesses in the Indiana, instead of taking a scorched earth approach to fighting anti-LGBT discrimination.

As CBS reports, Indiana businesses are already beginning to display “This Business Serves Everyone” stickers to reassure LGBT customers that they are welcome. If I were Benioff, I would continue sending employees to Indiana and encourage them to prioritize these businesses.

Boycotting sends a clear message, but supporting LGBT-inclusive businesses is more effective at combating bigotry. Gen Con could cost Indiana a staggering $50 million if it leaves Indianapolis. But the organizers could also take a stand against SB 101 by staying in the capitol and donating money to the non-profit organizations fighting the law like Indiana Equality Action.

There’s no reason why everyone in Indiana should have to suffer for the sins of their legislators.

At the root of the Indiana boycott, too, is the dangerous idea that the state is expendable because of its Midwestern location and conservative reputation. If New York passed a similar RFRA, corporate America could not afford to wage war with the state—nor would they want to, given the visibility of New York’s LGBT community. The conferences would continue and Silicon Valley would find other ways to fight the legislation.

There’s no reason why everyone in Indiana should have to suffer for the sins of their legislators.

Indiana’s LGBT community deserves to be treated with the same level of respect and care despite their longitude and latitude. LGBT people live everywhere—even in the so-called “flyover states,” even in places that actively discriminate against them, and, yes, even in Indiana. A wholesale boycott of Indiana erases the existence of LGBT Hoosiers, paradoxically punishing them for already being punished.

When I first heard that Pence signed SB101, I was selfishly worried that I would not feel comfortable returning to the city where I fell in love. But I’m going back to Bloomington soon and I’m bringing my checkbook with me.

Photo via SergeMelki/Flickr (CC BY 2.0)