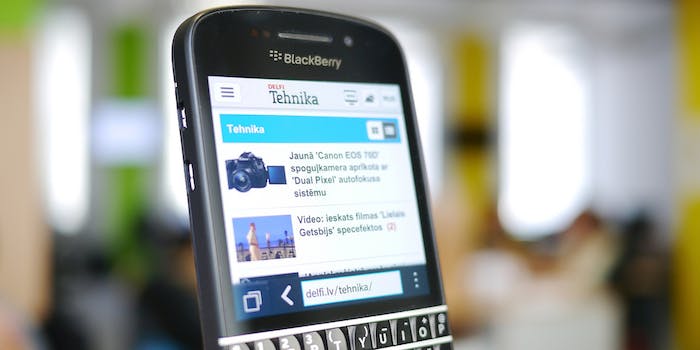 4 things BlackBerry needs to do to be cool again

The disgraced mobile company has a future if it wants it.

Don’t count BlackBerry out just yet.

It’s no secret that the mobile pioneer has had a rough couple of years. Its parent company, Research in Motion (or RIM), once looked to be heading to the top of the tech world, but thanks to some shortsighted business decisions, their legacy is now all but considered a wash. This is largely due to BlackBerry’s commitment to remain as a product for power players and tycoons, rather than the people that work for them. BlackBerry offered such advantages as a secure email service, which is great for CEOs and politicians, but not as important for the average smartphone buyer. In fact, it was predicted several years ago that by 2015, employees would be purchasing more business devices than their bosses; if we assume this prediction has come true, it could spell death for BlackBerry.

However, BlackBerry shouldn’t necessarily distance itself from being a “business device.” If anything, it should embrace that title by becoming the go-to business device for consumers. This, obviously, is no easy task, but BlackBerry doesn’t necessarily have to best the iPhone and Android completely to accomplish this. Instead, the company has to prove it can offer the best alternative to the other phones on the market when it comes to work-related tasks.

Many Americans have separate phones for work and their personal lives. If BlackBerry can prove it can remain the superior option when it comes to the first half of that divide, then it still might have a chance at survival. Here’s how Blackberry can do it.

1) Focus on the software

This is really the most important thing for BlackBerry going forward. Some of the company’s most vocal fans like the BlackBerry for cosmetic features like the traditional keyboard. But sadly, touches like this will have to take a backseat if BlackBerry wants to play in the big leagues. Apple made its name off their sleek design, but none of that would mean anything if what’s on the inside didn’t measure up. However, Android users will maintain that despite Apple’s flashy looks, their phones have the superior software. But regardless of what camp you fall in, the point is that if you don’t have great software, you don’t have anything worth using.

In an attempt to reestablish their relevance in the software department, the company will soon unveil their BlackBerry Leap, which is the most hi-tech BlackBerry yet. “The Leap runs BlackBerry 10.3.1,” notes Eric Zeman at InformationWeek. “It offers all the features expected of a modern BlackBerry, which means the Hub for managing communications and BBM for those business-related chats. Perhaps most importantly, the phone will include the Amazon Appstore and can run the Android apps contained therein. BlackBerry claims there are tens of thousands of Android apps that will run on its hardware.”

But as we know, it’s not just about having the technology. It’s all in how you use it.

BlackBerry’s offerings for apps have historically been less than up to par. Following the release of the BlackBerry 10 OS in 2013, Stuff Magazine wrote, “Sure, Angry Birds Star Wars, WhatsApp and Skype are all present and correct, but BlackBerry 10’s app collection is totally dwarfed by Apple and Google’s offerings.”

Applications are the currency of our mobile universe, and therefore, the more you have to offer, the richer you are. This is part of the reason Apple has consistently performed so well: The company has historically offered more apps than anyone else, which makes their phones the logical choice for many consumers.

The other important thing to remember in BlackBerry’s case is that it not only has to offer more applications but has to offer the right ones. For BlackBerry, this means apps that are better with at organizing, streamlining, and calculating—basically everything the average American working person needs to do on a daily basis.

Considering that BlackBerry has traditionally been the type of phone designed to appeal to people who work in the financial sector, the company and its leadership haven’t always made good investments. It also doesn’t help that it ate up a lot of their cash pile in the midst of their attempted recovery. Moreover, their phones have been consistently pricey in recent years. As Stuff Magazine pointed out in 2013, the BlackBerry Z10 cost as much as the Google Nexus 4 upon release, and the Nexus was significantly faster.

However, BlackBerry does seem to be starting to take back control of their finances again. “In the previous quarter, [BlackBerry CEO John] Chen’s team burned through almost $800 million,” wrote Aaron Pressman at Yahoo Finance last summer. “But this quarter, excluding the effects of a real estate sale, the burn was down to $255 million. With the real estate sale and a tax refund, Blackberry’s total cash actually rose to $3.1 billion from $2.7 billion three months earlier.”

Things aren’t hopeless yet. BlackBerry definitely needs to be taking in more cash, but if it stays the course, then it can hope to convince consumers that it’s a stable enough company to invest in. Their products will have to match these lofty goals, but make no mistake, straightening out their finances in a prompt order is a big, big part of this.

In some ways, BlackBerry is always going to be BlackBerry. If they want to be the world’s best business phone, then retaining some of their stodgy reputation is also essential to their success. As BlackBerry proceeds, the challenge will be to uphold this precedent, while also updating itself enough to fit into the modern smartphone landscape.

“The Q20, available before the end of the year, will have a traditional BlackBerry layout, aimed squarely at the company’s original core business and government customers,” Reuters‘ Paul Sandle and Eudora Rocha wrote in 2014. “The reintroduction of Blackberry’s traditional keyboard was at the top of customers’ wish list. … The line of keys that included the ‘Menu,’ ‘Back,’ ‘Send’ and ‘End’ buttons, along with a trackpad, had been dropped on its high-end Q10 keyboard device that was launched last year.”

But BlackBerry’s tradition is about way more than cosmetics; it’s about the people who use it. Sandle and Rocha go on to write of the company’s CEO: “Chen’s strategy is to focus more on its profitable services segment that helps its large government and corporate clients manage and secure mobile devices on their internal networks. While admitting the company had spread itself ‘a little too thin,’ he said it would focus on the 30 percent of the enterprise market where the strength of BlackBerry’s operating system in terms of security played best: regulated industries like banking and telecommunications, and government.”

But it doesn’t have to be this way. BlackBerry needs to aim for being the best work phone on the market for presidents and accountants alike. And if they can do that, they won’t need to pass their competitors. They’ll have finally secured a lane all their own.