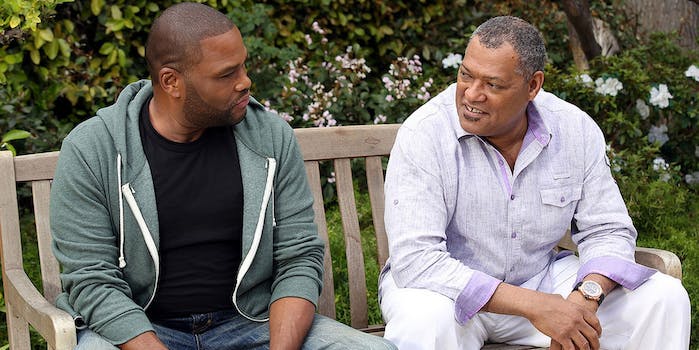 What ‘Black-ish’ gets wrong about race in post-Ferguson America

If you want to solve the problem of diversity on television, check out the Internet.

If you haven’t heard of Black&Sexy TV, it’s not what you might think.

Though the site and popular YouTube channel might sound like the perfect place to find something to watch while using one of Miles Klee’s homemade contraptions, it is not only SFW, but arguably the premiere source for quality webseries that are disrupting the world of black entertainment by telling stories featuring all black casts in situations that are relevant to a universal audience.

On shows like roomieloverfriends, we see stories unfold that resonates beyond race, without ignoring the importance of representing black faces in the media. Co-created by Dennis Dortch and Numa Perrier, the show continues to thrive in its third season, attracting hundreds of thousands of viewers with each episode. The show is successful, despite the fact that there is nothing stereotypically “black” about any given episode’s subject matter (e.g., the dubious decision to sleep with a roommate). There is, however, something fundamentally important about seeing an all-black cast play out this drama.

Instead of jumping on this trend, ABC’s new show Black-ish digs in its heels and insists that a black TV show must focus only on “black problems”—in this case the challenges of living in the ‘burbs.

Here’s how Hulu describes the show:

Andre ‘Dre’ Johnson has a great job, a beautiful wife, Rainbow, and four kids, and a colonial home in the ‘burbs. But has success brought too much assimilation for this black family?

The very title of the show assumes that the scenario described above is not an authentically black experience. This assumption is fundamentally problematic at best, and the show’s attempt to address the issues that result from being a person of color in suburban America only makes it worse.

Played by character actor Anthony Anderson, Black-ish’s father figure explores a valid discomfort with his transition from a tough upbringing to his current lifestyle. While one could argue that exploring this divide is a positive thing, Black-ish completely fails at the execution.

First, Anderson’s character constantly teases his wife, played by Tracee Ellis Ross, for not having a traditionally “black” upbringing, insisting that this means she isn’t as “black” as he is on multiple occasions. For every person of color who has ever been accused of “talking white” or “not being black enough,” this notion is utterly cringe-worthy.

When his young son expresses interest in playing field hockey over basketball, it nearly ruins their relationship, surfacing an underlying homophobia that is often assumed of black men. The episode results with his son revealing his true desire to play basketball after all, and all is well between father and son again. In another episode, the family partiarch (played by Laurence Fishburne) finds his grandson stretching and comments, “It looks a little gay.” Ugh.

In a post for the Daily Beast, Tim Teeman writes of the controversial episode:

Let’s be clear here: ‘Weird’ means ‘gay,’ and the expression on Dre’s face—curdling disgust, fear, apprehension, all in one delightful scowl—made it clear what the idea of being thought of as weird/gay meant to him and, by extension, what he wanted his son to feel at the thought of it, too. It underscored that homosexuality is bad, homosexuality is something to be feared, and that you must be watchful or fearful of doing or saying anything that might indicate you are gay, or that seems ‘gay.’ You know: anything too sensitive, thoughtful, too sharing, too out there… What would people think?

But this indicident doesn’t just indicate the show’s issues with LGBT stereotypes but representing all people honestly. In an interview with Janet Mock, co-star Tracee Ellis Ross makes a valiant attempt at defending the premise of Black-ish by stating that it explores the black “ish” that suburban black families truly deal with.

What is black? Is there a way to define that? And isn’t that something that’s different for everybody? Because as a black person, we are not a monolithic group. We all have different experiences and that’s the same for everyone. To me, [Black-ish is] about the human ish told through the perspective of this black family…We’re gonna take the stereotype, the thing people always say, and pull it apart and go, ‘Why are we even asking that question? And what does it even mean?

Fair point, but Black-ish struggles to make this middle ground both relatable and funny for the audiences who have to navigate that space every day. The plot points addressed in Black-ish gloss over a very real challenge of the black American experience with a levity that just doesn’t match the reality of being black in a post-Ferguson America. It’s not enough to point out the “ish.” What we need to show why it exists in the first place.

As W.E.B. Dubois wrote in The Souls of Black Folks, “It is a peculiar sensation, this double-consciousness, this sense of always looking at one’s self through the eyes of others, of measuring one’s soul by the tape of a world that looks on in amused contempt and pity.” Unfortunately, that amused contempt and pity could be what makes the show so popular. It debuted to 11 million viewers and continues to rake in a steady 7 million each week.

If Hollywood is truly interested in addressing the difficulties of black double-consciousness, they’ll take a page from the playbook of someone like Amani Starnes, star and creator of YouTube series The United Colors of Amani, which does a much better job of mixing humor with examining the particular challenges of being “non-traditionally” black in America. The show follows Starnes, a young biracial actress trying to make it in L.A., as the auditions for different parts.

If it feels bracingly real, that’s because, according to the Washington Post‘s Soraya Nadia McDonald, it is. “All episodes are based on Starnes’s life experiences, although some are composites,” McDonald wrote in a profile of the show. “Sometimes, United Colors of Amani can seem like a 2013 continuation of ‘Hollywood Shuffle.’ In one audition for a toothpaste commercial, Starnes encounters a particularly color-struck casting director who says, ‘Black girls and redheads—that’s what it takes to sell facial cream.’ She swears this happened.”

When it comes to being both personal and real, why hasn’t Hollywood caught up to the Internet? As Starnes herself put it, “Black creators have to prove that there’s an audience before they can get any funding…that’s just the truth of the matter.”

All hail the Internet for showing us what’s possible. ABC may not get it quite yet—and no, I don’t think Scandal checks the all-black cast box, but we’ll discuss that another day—networks like HBO are taking notice, and we hear Black&Sexy’s webseries The Couple has scored a development deal. ABC might get an A for effort, but for the time being, Black-ish gets a #majorfail when it comes to execution.

Correction: This article previously stated that Issa Rae was the creator of roomieloverfriends. It was Dennis Dortch and Numa Perrier.