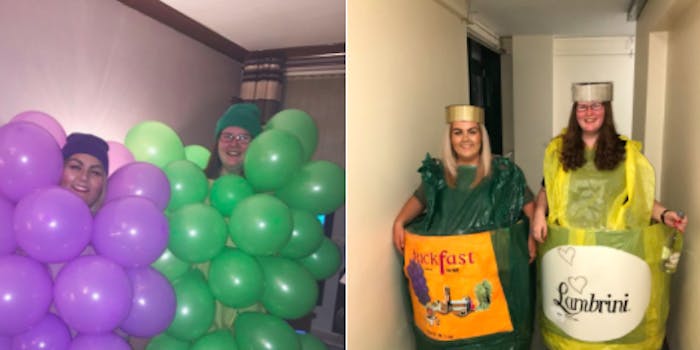 Halloween 2017: The costumes that won the internet

It was a wild and hilarious year.

The internet has spoken. This year’s Halloween costumes were out of this world and over-the-top creative. Some dressed up as their favorite musicians, TV, and movie stars, and even as their favorite makeup. Here’s what we’ll remember.

The best costumes of Halloween 2017

Rihanna loved this fan who dressed like the pop star’s makeup line so much she just had to reblog her.

Peter Pan’s shadow is iconic in the movie. This friend duo nailed Halloween by being the boy who never grows up (and his shadow).

“Pinhead Larry” hit the streets f0r Halloween with a fashionable pair or boots and fishnet leggings.

who ya callin pinhead pic.twitter.com/UtgD5KHXNl

Mermaid Man and Barnacle Boy made a few Halloween appearances, riding around in their invisible boat mobile.

This girl may look more like Moana than Moana does.

These girls matured from grapes into wine.

What are you, an idiot sandwich? This couple perfectly captured Gordon Ramsey and chef Julie Chen.

my sister & her bf gmfu pic.twitter.com/fZnNeeIthT

This group of friends put a fun spin on a childhood favorite, Arthur.

if #Arthur was an edgy teen drama on the CW pic.twitter.com/Axk60uHFJ2

The Kardashians gained another pregnant sister.

This was the perfect Selena Quintanilla costume, and there was even boyfriend Chris Perez to tag along.

To Chris with love , thank you for being my bidi bidi best friend ❤️ pic.twitter.com/EAUf4fvm7I

LeBron James transformed into Pennywise the clown for his annual Halloween costume party.

We all remember Crazy Steve from iCarly.

This kids got inspiration from Forrest Gump. A Lieutenant Dan and Gump dynamic duo.

Cardi B was a popular Halloween costume as well. This little girl is newly engaged Cardi B.

This baby just found all seven dragon balls and it’s only his first Halloween.

Gabrielle Union and Dwayne Wade teamed up for the perfect Mili Vanilla costume.

Kourtney and Kim Kardashian were the perfect 1990s Michael Jackson and Madonna. Their inspiration came from a 1991 photo from the Academy Awards.

These two recreated the dance battle scene from White Chicks.