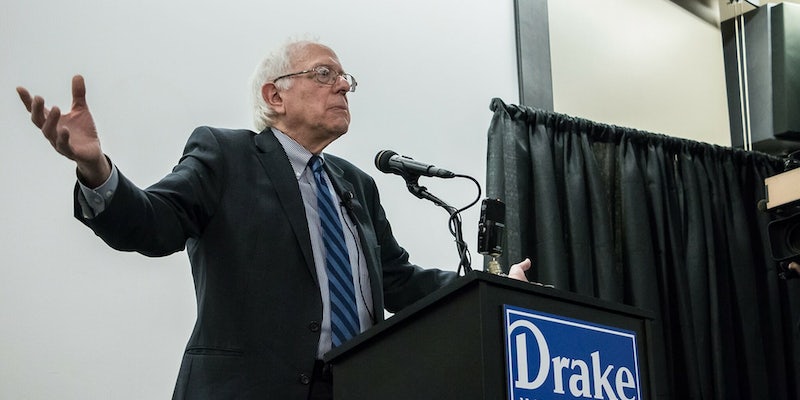 It’s impossible to deny that the Vermont Senator and Democratic presidential candidate has routinely broken the Internet, for better and for worse. At the very least, Sanders deserves credit for bringing attention to certain issues which are largely ignored by the Washington elite, such as income inequality and the cost of higher education. But in a video clip making the rounds Wednesday of Sanders speaking to Congress in 1992, he highlights what is perhaps the biggest blind spot in American political discourse of our time: the military-industrial complex.

In the years since that video that taken, Sanders hasn’t backed down on this issue. Just this month, he tweeted about Republicans’ obsession with military funding. But no matter how you feel about Sanders or his candidacy, it’s time to start caring about defense spending in this country. America’s military-industrial complex is out of control, and continues to lead us down a dangerous path.

You wouldn’t necessarily think that Bernie Sanders and Republican President Dwight D. Eisenhower had a lot in common. But it was Eisenhower, himself a five-star Army general, who first warned of the military-industrial complex, and the “unwarranted influence” that corporate entities might have on the Pentagon. “Every gun that is made, every warship launched, every rocket fired signifies, in the final sense, a theft from those who hunger and are not fed, those who are cold and are not clothed,” said Eisenhower in his first major speech as president, back in 1953.

Eisenhower’s words make for great, quotable rhetoric, but their implications go beyond political showboating, especially when put into post-9/11 context. As a Washington Post investigation revealed in 2010, 1,931 different defense companies aid in U.S. counterterrorism, homeland security, and intelligence efforts. And about 500,000 defense contractors now have the highest level of security clearance. “This might be defensible if private contractors actually saved taxpayer dollars, but they don’t,” argues the Daily Beast’s John Avlon. That’s because, according to the Office of the Director of National Defense, these contractors make up 29 percent of the intelligence workforce, but take up roughly 49 percent of personnel budgets.

Defense spending accounts for more than half of U.S. discretionary spending. When Bernie Sanders was recorded talking about the military-industrial complex in 1992, the U.S. defense budget was $270 billion. Today, it’s $610 billion. That’s more than the defense budget of the next seven countries combined. And when 70 percent of that budget goes to defense contractors alone, it’s time to admit that the military-industrial complex is not just an idea, it’s a fact.

A strong military helps make for a strong country. But it is not the only thing that helps make for a strong country. Consider that discretionary spending for health and human services comes in at just under $80 billion. The U.S. is ranked approximately 17th in education, while our federal education budget of $70 billion looks paltry compared to the $610 billion we are spending on defense. The budget for the Veterans Administration is also around $70 billion. That means we don’t even spend as much as a fifth of the money that’s allocated for going to war as we do on on the soldiers who fight our wars for us. Military healthcare costs have gone up from $19 billion in 2001 to $47.4 billion in 2015. Experts believe that the VA is underfunded by about $9 billion, yet the U.S. could divert less than 2 percent from the defense budget and still have more than enough to cover those expenses.

Our veterans are suffering and our schools are failing, but apparently, what we should be concerned about is abuse of food stamps.

A report from last year from the Council on Foreign Relations actually found that in conjunction with global trends, U.S. defense spending was down compared to years past. However, our folly continues to be spending on defense without regard for other economic and political concerns. As CFR analyst Dinah Walker noted, “A rising share of global military expenditure based on a rising share of global GDP (gross domestic product) is likely to be more sustainable over the long term than an increase based on a decision to spend more of GDP on defense at the expense of other priorities.”

The searing irony in this is that when pundits and politicians talk about misuse of federal funds, they never talk about defense. Our veterans are suffering and our schools are failing, but apparently, what we should be concerned about is abuse of food stamps.

It is true that the military-industrial complex and our obsession with defense spending has created a deference to the armed forces, but that hasn’t done our soldiers any favors. As the problems with the VA indicate, we are now more disconnected with real members of the military than ever. About 2.5 million Americans served in Iraq or Afghanistan throughout the years we’ve been fighting the War on Terror. That’s somewhere in the ballpark of three-quarters of a percent of the total U.S. population. And despite Congress’s willingness to show love for the troops over and over again by throwing money into defense, only about a fifth of them have direct military experience.

That’s not to say that the answer to all this is more people signing up for the military, or more elected officials with military experience. One key realization, though, is that the military-industrial complex has played a trick on us. We’ve been led to believe that our military might is unquestionable, that to so much as suggest that we might be better off putting some of our money elsewhere, that there are better investments than war machines designed to police the world, is a slap in the face to our troops and to all we hold dear.

The truth is just the opposite. By galvanizing support for the military as an institution, we’ve marginalized our soldiers as individuals. As the Atlantic’s James Fallows wrote earlier this year:

“The difference between the earlier America that knew its military and the modern America that gazes admiringly at its heroes shows up sharply in changes in popular and media culture… As a result, what happens to all institutions that escape serious external scrutiny and engagement has happened to our military. Outsiders treat it both too reverently and too cavalierly, as if regarding its members as heroes makes up for committing them to unending, unwinnable missions and denying them anything like the political mindshare we give to other major public undertakings, from medical care to public education to environmental rules.”

Medical care, public education, and environmental rules are essential for the success of this country, as is the health and well-being of our veterans. But none of these things can come to pass in their full potential if we keep spending money on defense with reckless abandon. This is the “theft” Eisenhower was talking about. The military-industrial complex is designed to benefit private entities over the American people, entities without no accountability, and no scruples. Because of the enormity of these entities, funds are drained from elsewhere, and the country as a whole suffers. And all while this is going on, we wave our flags, urging each other to “support the troops,” forgetting that the military has done them as great a disservice as it has any of our citizens.

The New Yorker’s Jill Lepore wrote that, “Between militarism and pacifism lie diplomacy, accountability, and restraint.” In that spirit, and for the sake of our future at home and across the globe, we must now learn a lesson: Sometimes, less is more. Before we can do that though, we have to unlearn the ethos of “more is more”—the ethos that the modern military has taught us.