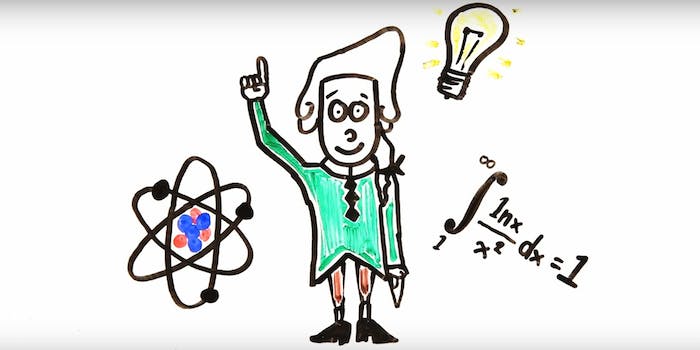 Why the ‘war on science’ continues to lose the American public

In an environment where the public is so misinformed, it’s not surprising that the politics follow.

If you keep up with science news, you know there are a lot of people out there who seem not to believe in science. They deny that climate change is real, or they fear vaccines will harm their children. Some think we’re spending too much money on science. These people are cast as “anti-science” by just about everyone—but themselves.

This week educational YouTubers Michael Moffit and Gregory Brown of AsapSCIENCE took a break from their normal routine to post an emotional treatise on the “war on science.” And while everything in their video was true, poignant, and important, their message is falling on deaf ears.

The video begins by highlighting how science (and engineering) affects us all, yet has paradoxically been at odds with society throughout history. Science’s foothold in our collective progress is slipping in the age of governments eviscerating funding for basic research, the anti-vaccination movement, climate change denial, the push to restrict women’s access to healthcare, and more. Moffit and Brown are right that society’s rejection of science is not new—but calling it a “war” is a gross mischaracterization that has the whole argument shooting itself in the foot.

The video is likely resonating with people who already believe that science is important and threatened by the state of policies in the U.S. and Canada (Brown and Moffit’s home country). But the people who need to hear the message, the ones who are supposedly declaring war on science, won’t heed it. That is, in part, because they don’t see themselves as antagonists. Quite the contrary, most people who want to deny and defund science actually see themselves as pro-science. It’s a widespread situation.

In an environment where the public is so misinformed on science, it’s not surprising that the politics follow.

According to science journalist Tera Helle, anti-vaxxers are generally well-educated savvy people who feel that their science is stronger than the mainstream. The same goes for people who deny that climate change is man-made and threatening to our planet. Both groups have a long history of skepticism, even on the part of scientists themselves, to lend false credence to their beliefs. Most of the people in these movements are reasonable, concerned citizens who are misinformed and entrenched in their own beliefs. They see themselves as active culture warriors who have been oppressed. (This is excluding certain corporations and politicians who actively suppress science for their own gain—such as Exxon-Mobil—and are truly are anti-science.)

When it comes to healthcare, using science won’t do much to change the minds of people who are against abortion. Recently, science communicator Bill Nye released a video detailing the process by which an egg and sperm become a fertilized embryo and, eventually, a fetus. In the video he notes that most fertilized embryos don’t implant on the uterine wall and that many women miscarry their pregnancies before they’re even aware they’re pregnant. While this is true, it doesn’t debunk anti-abortion claims as Nye may hope it will. This is because people who are anti-abortion are anti-abortion on moral grounds, not scientific ones. This is also why arguing that Planned Parenthood’s other health services to women—or the many scientific gains from donated fetal tissue—does little to soothe detractors. They’re not anti-science; they are, to use their own words, “pro-life.”

In an environment where the public is so misinformed on science, it’s not surprising that the politics follow.

When it comes to policy and politics, people we elect to office are trying to balance catering what their supporters will like and their own beliefs. As Moffit and Brown note, many politicians are short-sighted and may not see how basic science research may hold profitable benefits down the road. Some misunderstand science because they only see it from an outsider’s perspective. In 2011, Sen. Tom Coburn (R-Okla.) characterized much basic research as frivolous government spending, citing one experiment where researchers put shrimp on treadmills. In reality, the “shrimp on treadmills” was just one (inexpensive) part of a larger study of aquaculture that tested how shrimp respond to changes in water quality.

Culberson obviously sees himself as pro-science, yet at the same time misunderstands the fundamental process of research.

According to the Los Angeles Times, this year, Rep. John Culberson (R-Texas) questioned the validity of a study involving prostitutes in Thailand. Culberson characterized the government-funded study as focused on alcoholism among the Thai sex workers, when in reality it was a study on the transmission of HIV and how to prevent it.

But in a Q&A with the author of the Times article, Culberson says, “Let [the National Science Foundation] stay focused on basic science, on fundamental questions of the universe, the fundamental questions of the nature of matter at the atomic level, and at the other end of the spectrum, what is dark matter, what is dark energy, the origin of the universe and the origins of life.” Culberson goes on to say, “If the NSF will stay focused on the fundamentals and avoid as best they can getting drawn off into esoteric and controversial social science questions, they would help themselves tremendously and avoid unnecessary controversy.”

Culberson obviously sees himself as pro-science, yet at the same time misunderstands the fundamental process of research.

There is no excuse why the people making our policy shouldn’t understand the incremental, curiosity-driven process of research. That is the best point made by Brown and Moffit—if we want pro-science politicians in office then it’s up to us to elect them. And, as Brown and Moffit say, electing them means changing public opinion toward a pro-science baseline stance.

But it takes a lot more than a few (or many) videos. Especially when those videos espouse the importance of science while simultaneously putting down those who are skeptical of it—that only alienates people.

People who believe in science need to step away from this us-versus-them mentality because it doesn’t help anyone. There isn’t a “war” on science, just deep-seated misunderstanding and skepticism.

If we truly want a utopian society where everyone believes in science, we have to do what Brown and Moffit do regularly—explain science in a way that’s simple and easy to understand. We need to improve science education in school by engaging critical thinking and actually teaching the scientific process and its history, not just facts and figures. We need to shed more light on the cloistered lives of scientists in their laboratories so they don’t seem so distant and inscrutible. And, of course, one of the best ways to do that is to go to the polls and vote for politicians who share your science beliefs. But don’t declare war on those who vote differently. Try to converse with them and understand where they’re coming from instead.