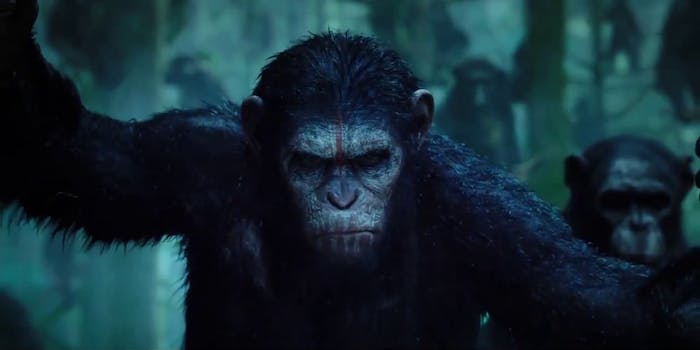 It’s no secret that the Academy Awards have a reputation of being severely out of touch. But while this reputation is largely about their lack of diversity, there’s also a question of whether the Oscars are behind the times on technology.

To wit, news broke last week that Fox would be pushing hard for Andy Serkis to receive a Best Supporting Actor nomination for his performance in Dawn of the Planet of the Apes. Of course, it’s not the first time Fox has tried this, and it’s not the first time they’ve been ignored. They previously lobbied on behalf of Serkis for his role in the first installment of the rebooted Planet of the Apes franchise, 2011’s Rise, though their efforts were to no avail. Serkis’ performance has been widely acclaimed on the Internet, where he’s been a favorite of fanboys and Oscar bloggers for years, so it’s no surprise that there’s wide public sentiment on Serkis’ behalf to finally hab that nomination.

Back home after watching #DawnofApes film. Give that man an Oscar. It was emotional @andyserkis

Who deserves an #Oscar nom? @andyserkis! @TheAcademy: Andy Serkis at the #GovAwards pic.twitter.com/Ahkd3U4lQz

Dawn of the Apes was amazing. Andy Serkis needs an Oscar. So underrated.

Andy Serkis 100% Legend! a brilliant man. He deserves an #Oscar. As long as he dresses up as an ape to collect it.

New Oscar-category: performances in CGI. @andyserkis should win – retroactively for Gollum, and for Caeser in Dawn of Planet of the Apes.

For his part, Serkis seems almost tired of talking about the whole thing. “It’s a long-standing debate, really, but I’ve always held that there shouldn’t be a separate [Oscar] category,” he told Wired back in July. “This is acting, and the acting part of it is what is authoring the performance on set. Then, of course, there’s visual effects—the rendering and the artistry and the animation that goes on top to take our performances and put them [on screen]. That’s a visual effects category. So I don’t think blending them makes any sense whatsoever.”

Serkis is correct in that the conversation about whether a mo-cap performance can merit an Oscar nomination isn’t new. Yet what makes it all the more frustrating to the digital generation is that by now, everyone pretty much seems to be in agreement on this: yes, motion capture performances should be able to receive Academy Award nominations. The Internet has been saying this for a minute, and chances are they’ll continue to say it until the Academy decides to pay attention.

With upcoming roles in films like Avengers: Age of Ultron and Star Wars: Episode VII, not to mention pulling double duty as actor and director in a new version of The Jungle Book, plus a possible adaptation of Animal Farm, Serkis isn’t going to lack for work. Nevertheless, if nothing else because this debate is getting exhausting, the Academy needs to acknowledge that Serkis and other actors in great mo-cap performance are worthy of recognition. If this wasn’t a likely possible before, the robust acclaim that Dawn has received may finally change that. Even critics who didn’t like the film liked Serkis’ performance. And you don’t have to look far and wide online to find writers already advocating on Serkis’ behalf. More and more, it feels like a groundswell of support for what he does is finally here, and frankly, it’s overdue.

Before we praise Serkis’ many important contributions to the field of motion capture performances any further, let’s take a moment to remember there have been other fine actors who’ve gotten deserved acclaim for their takes on CGI characters, too. One shouldn’t forget the likes of Benedict Cumberbatch in last year’s Hobbit installment or Zoe Saldana in Avatar, just to name a few. It also goes without saying that not every CGI-driven performance merits the same amount of recognition. Like any kind of performance, a motion capture performance is highly dependent on the script, the direction, and most of all, the actor at the center of it.

But where Serkis is particularly important to the medium is that he has definitevly shown us time and time again that a CGI performance can be more than a neat trick and that it can be an actual work of art. Dating back to his turn as Gollum/Sméagol in the Lord of the Rings trilogy, Serkis delivered some of the finest acting in the entire franchise. He brought life and vitality to the titular beast in Peter Jackson’s King Kong, a very sluggish film save for Serkis’ performance. And in the new Planet of the Apes series, he’s helped to give Caesar a subtlety that few characters in American blockbusters, human or otherwise, ever tend to achieve. In fact, with the help of the films’ skilled animators, Serkis has actually made Caesar the most human character in the ape-filled story.

And Serkis wasn’t the only mo-cap actor who killed it in this summer’s excellent Dawn. As the film’s villain, Koba, actor Toby Kebbell matched Caesar’s strong, stoic demeanor with unhinged, vengeful energy. It’s a big, attention-grabbing performance, and Kebbell plays it with a seething rage that is at once completely animal and yet entirely familiar. Unsurprisingly, Fox will be campaigning to get him a nomination, too. Though Kebbell doesn’t quite steal the entire show from Serkis, he smashes any notion that there can’t be more than one actor, much less more than one actor in a single movie, capable of delivering a CGI performance that is nothing less than transcendent.

Recognizing actors for motion capture performances means basically redefining what we think a great performance can be. This can actually apply beyond CGI performances, and hold true in other cases as well. Take Scarlett Johansson as Samantha, the operating system in Spike Jonze’s much loved Her, from that year. Though all you hear is Johansson’s voice, the performance is quite breathtaking, and may actually be a career highlight for her. Moreover, Johansson was brought in as a last minute replacement on the film, making her vocal choices all the more impressive, and ultimately, more integral to the movie’s success.

Though she did earn her fair share of praise and even a few awards for the role, one could easily argue Johansson was snubbed come Oscar time. “But is it fair to reward an actor who is only using one of their tools?” you might ask. And this isn’t entirely an inappropriate question. Except who’s to say that an actor who gives a fantastic vocal performance is automatically less deserving of attention than an actor who gives a performance with their whole body that’s merely good? In general, Johansson’s effect on the movie is, with the aid of brilliant sound editing, to exemplify the feelings of both isolation and closeness that Her explores in relation to technology. And she does a remarkable job of it.

Some might ask whether the purity of various art forms are at risk with the rise of certain technologies. Anyone who has seen the rather cheesy Al Pacino movie, S1m0ne, might recall its vision of a director driven mad by his creation of a stunningly perfect and boundlessly talented CGI actress. However, these concerns have started to pop up in real life Hollywood too recently. After Serkis performance in Dawn began to gain critical momentum this summer, the Atlantic’s Katie Kilkenny noted:

During Avatar’s 2010 Oscar run, actors competing against the film talked up the idea that performance-capture roles represented a threat to their profession. ‘Actors will kind of be a thing of the past,’ Jeff Bridges told the Los Angeles Times the day nominations were announced. ‘We’ll be turned into combinations. A director will be able to say, ‘I want 60% Clooney; give me 10% Bridges; and throw some Charles Bronson in there.’ They’ll come up with a new guy who will look like nobody who has ever lived and that person or thing will be huge.’

To be fair, if we’re talking about a stage performance, it seems foolish to assume technology will ever do much to aid the intimacy of live theater. And as for Hollywood movies, there is always something rather beautiful about a film that is completely CGI-free, in a Blockbuster marketplace that is dominated by computer-animated effects. However, in this world of increased technology, shouldn’t we be able to use some of what we’ve created to enhance the gifts actors already have? And shouldn’t the Academy be excited about that? If the über-pretentious James Franco himself can sign off on Serkis, why can’t the rest of Hollywood?

Perhaps we’re all placing too much emphasis on mo-cap’s Oscar chances. As KilKenny goes on to conclude, “Creativity can be unleashed in serious roles—it can also be quashed when too much attention is paid to awards considerations and featuring the singular actors who have the chops to win them.” But be that as it may, Serkis’ deserves to be rewarded, both for his individual performance in Dawn, and his contribution to the field of acting as a whole. A bad actor cannot give a good mo-cap performance. But the right actor in the right role can, every now and then, give a mo-cap performance that raises both their craft, and the potential of cinema and technology altogether.

Photo via Dawn of the Planet of the Apes/Trailer